Production of Food in the Future

The idea of feeding a population of 9 billion by the year 2050 is daunting. Consider the United Nations’ estimate that 1 billion people in the world today are hungry. The average number of malnourished people worldwide between 1990and 2006 is 850 million with the high point of 1.023 billion hungry people, reached in the 2008 crises. Before we can determine if we can feed 9 billion people in 2050, is it not a better question to ask: “Have we met the needs of our current population?” Increases in population growth, higher food prices due to increased demand, and rising poverty levels both in the US and internationally are all obstacles that need to be controlled.

Turn in your highest-quality paper
Get a qualified writer to help you with
“ Production of Food in the Future ”
Get high-quality paper
NEW! AI matching with writer

To begin with, strategies mentioned in “The Future of Food” need to be put to use, in order to overcome the challenges we face in meeting the growing demand for food.

Elizabeth Dickinson states, “the world is always on the verge of a food crisis” (144).

The population in this world is growing larger and larger everyday, so imagine how much food production would need to increase to feed 9 billion people by 2050.

For example, in Elizabeth Dickinson’s info graphic essay, the largest number of respondents voted that the world would need to increase its food production by 70 percent. That is an enormous percentage because we would need to start increasing the production from now, so by the time 2050 comes around we will have increased by 70 percent. If we delay the process of starting to increase the food production then we will probably still won’t be able to feed the whole world in the future.

As the population grows, increased demand will lead to higher food prices. For example, at any time demand for a commodity rises, prices generally surge. On the other hand, at any time demand for a commodity goes down, prices decrease. The cycle works the same with supply. An increase in supply on constant demand will cause a decrease in prices while decreasing demand will cause an increase in prices. In other words, if there is too much of the same supply but little demand then the price will go down, rather than having too much of the same supply with very high demand, prices will go up.

People often ask, “What’s going on in the world today that is causing this food production problem to happen?” The answer remains, the population growth. A few examples of what has caused food prices to rise so high are: China and India have the largest and quickest growing populations generating demand for food from around the globe, so impact on prices has been raising demand from these countries, the Japanese tsunami and earthquake drove up seafood prices by 6%, and vegetable prices rose 50% month due to crop damage in Australia, Russia, and South America.

If these prices keep rising we will not be able to feed the whole world and we will still have hungry people in poor countries. Elizabeth Dickinson states, “Poverty is the main problem. Even when food is abundant, many go hungry because of the lack of income to purchase food” (146). To cut down the global hunger rate, ten respondents voted that the international community should promote broader economic growth. In other words, we should produce a wider and vigorous quantity of growth. Strategies we can use to face all these challenges are genetic engineering, stress-resistant breeding, and the use of ecosystems in farming.

The Green Revolution, which did not bypass Africa, is another problem facing food production. Elizabeth Dickinson proclaimed, “It failed because expensive hybrid seeds and fertilizers quickly degraded soils and impoverished small farmers” (147). This Green Revolution was ineffective. The use of fertilizer increased significantly, while per capita agriculture decreased dramatically. Yield continued to stay stationary in throughout Africa in the main crops such as maize, rice, wheat, etc.

The green Revolutions impact on farming and food production has caused virulent disputes. Some people argue that it has saved many lives by enlarging agricultural productivity, while others argue that it ha made a catastrophic impact on small farmers. It has also effected the environments by “generating a massive global market for seed, pesticide, and fertilizer corporations” (GRAIN). Experiments studied in the past have came to the conclusion by stating, “a main reason for the inefficiency of Africa’s agriculture is that the crops on the great majority of small farms are not the high-yielding varieties in common use on the other continents” (GRAIN).

Lastly, in “What Do We Deserve?” all of the different models of economic justice relate to “The Future of Food” by Elizabeth Dickinson. The first model is the libertarian model. This model is about the inequality of people and how different races, classes, genders, and people with different sexuality preferences don’t have the same opportunities and don’t start out their lives the same. For example, people of different classes either grow up rich, middle class, or poor. Arora states, “So while the racetrack may look nice and shiny, the runners don’t begin at the same staring point” (87). The second model is the meritocratic model.

This model is about how some people are already born with talents and attributes while others don’t have that advantage. Those who do not have those advantages have to work hard to earn their wins. For example, society does not give as much praise to a person who isn’t born with a talent or attribute than they do to those who already have it in them. Arora expresses, “Are their wins not as arbitrary from a moral standpoint as the wins of those born with silver spoons in their mouths?” (88). The third model is the egalitarian model.

This model talks about how if the people who are born with natural gifts don’t work for their success but still get rewarded, they should share their rewards with the public who do work to earn rewards. For example, if someone is born wealthy because of the family they come from, then they should be considerate to others and share what they have instead of being greedy. They did not work hard to earn the wealth. It was just handed to them very easily. Arora proclaims, “We should certainly encourage people to hone and exercise their aptitudes, but we should be clear that they do not morally deserve the rewards their aptitudes earn from the market” (88).

All of these models relate to “The Future of Food” in very similar ways. It shows that not all people can afford the increasing prices of food, which causes world hunger. The ones born with attributes that make their life easier would be able to gain fame and fortune and wont have to worry about going hungry. Also they have things a lot easier than others. People don’t deserve anything unless they have earned it. It is not fair to those who are trying hard to succeed but fail and get no credit at all.

Those trying to succeed are trying to provide for themselves in order to afford the food while prices are getting higher and higher. To sum it up, food production in the future will be a very big challenge we will have to face, but all obstacles can be overcome if we set our minds to it. I believe that if we all work together on the strategies talked about earlier, we can achieve feeding all nine billion people in this world, including all the starving people in the countries that suffer from poverty. Also with all the types of models of economic justice, society need to be fair with the right ways on rewarding people from either different classes or with different advantages.

Production of Food in the Future. (2016, May 11). Retrieved from https://studymoose.com/production-of-food-in-the-future-essay 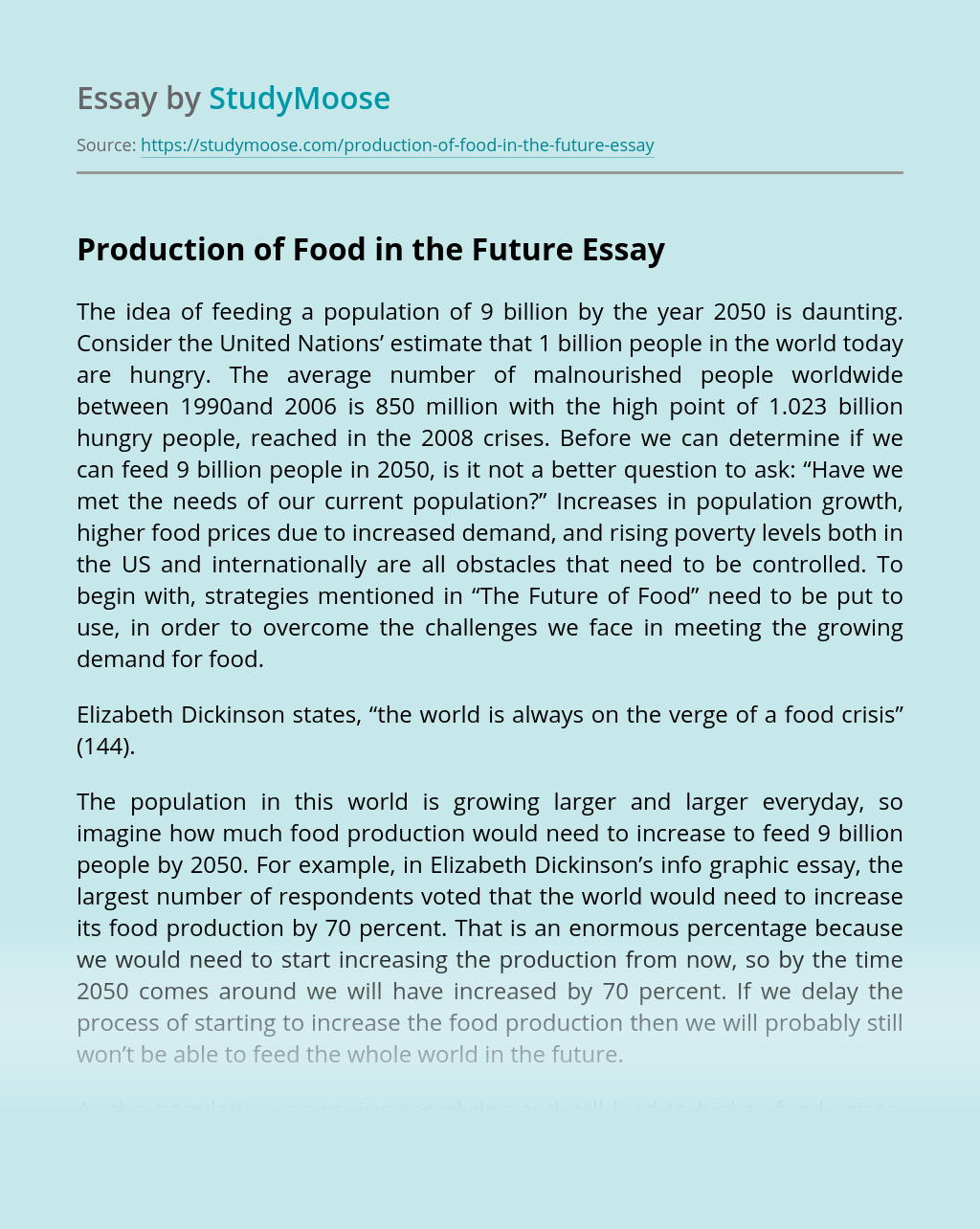 Turn in your highest-quality paper
Get a qualified writer to help you with
“ Production of Food in the Future ”
Get high-quality paper
Helping students since 2015
Stay Safe, Stay Original