This first stage is when a product is introduced in to a market known as a product launch; this is also the most expensive stage of the four stages. The first introduction of the Audi R8 was at the Frankfurt Motor Show which was held in Germany. The Frankfurt Motor Show is a show which car lovers attend to see the newest release of cars, the types of people who would attend these events are the people who are interested such as investors, collectors and also affluent people.

Don't use plagiarized sources. Get your custom essay on
“ Product Life Cycle of an Audi R8 ”
Get custom paper
NEW! smart matching with writer

The Audi R8 was introduced by the German automaker in 2006, the supercar was so popular 50,700 was built by the end of 2013. The most popular sales where in Dubai after the motor show, in Dubai the people love to spend the money on fast supercars, for this reason Audi held a motor show which are bought by early adopter or trendsetters. Development will cost Audi a large amount of money to be able to develop a supercar such as an Audi R8.

This process is when they would be taking a loss because of the research and development which is needed on the product to be able to compete with other supercars such as Lamborghini, Aston Martin and Bugatti.

For a big organisation like Audi they will have plenty of cash reserve from previous models income and profits which they have saved in order to generate new cars.

“The Growth stage is the second of stages in the product life cycle, and for many manufacturers this is the key stage for establishing a product’s position in a market, increasing sales, and improving profit margins.

” Mikel, J. (2005). Audi will advertise heavily during this stage to create awareness. There is very little competition at the beginning of the stage because of the unique concept of the R8 As the number of competitors increase market share becomes important to the organisation. David, S. (2005).

After the Introduction and Growth stages, a product passes into the Maturity stage. The third of the product life cycle stages can be quite a challenging time for manufacturers. In the first two stages companies try to establish a market and then grow sales of their product to achieve as large a share of that market as possible. Mikel, J. (2005). Sales Volumes Peak: For Audi after the steady increase in sales during the Growth stage, the market will attract fewer new customers. The majority of the consumers who are ever going to purchase the Audi R8 will have already done so.

Profits Start to Decrease: While this stage may be when the market as a whole makes the most profit, it is often the part of the product life cycle where a lot of manufacturers such as Audi can start to see their profits decrease.

Increased Market Share through Differences: While the market may reach capability during the Maturity stage, Audi would be able to grow their market share and increase profits in other ways such as new interiors for the cars and also offer add on for the cars.

When an Audi product comes to the early stages of decline stages, this is when Audi will create other options of cars. Audi group will have large cash reserves therefore they would create new lines of cars for the car which is declining. For Audi they are still in the growing stage therefore decline stage isn’t something which they would be thinking about. The Audi R8 is relatively a new car which means it’s still in the growing procedure. From the graphs it shows the increase of sales on the R8 from 2010 till 2013, on the other hand this shows that it’s still growing. Durheime, W. (2013). 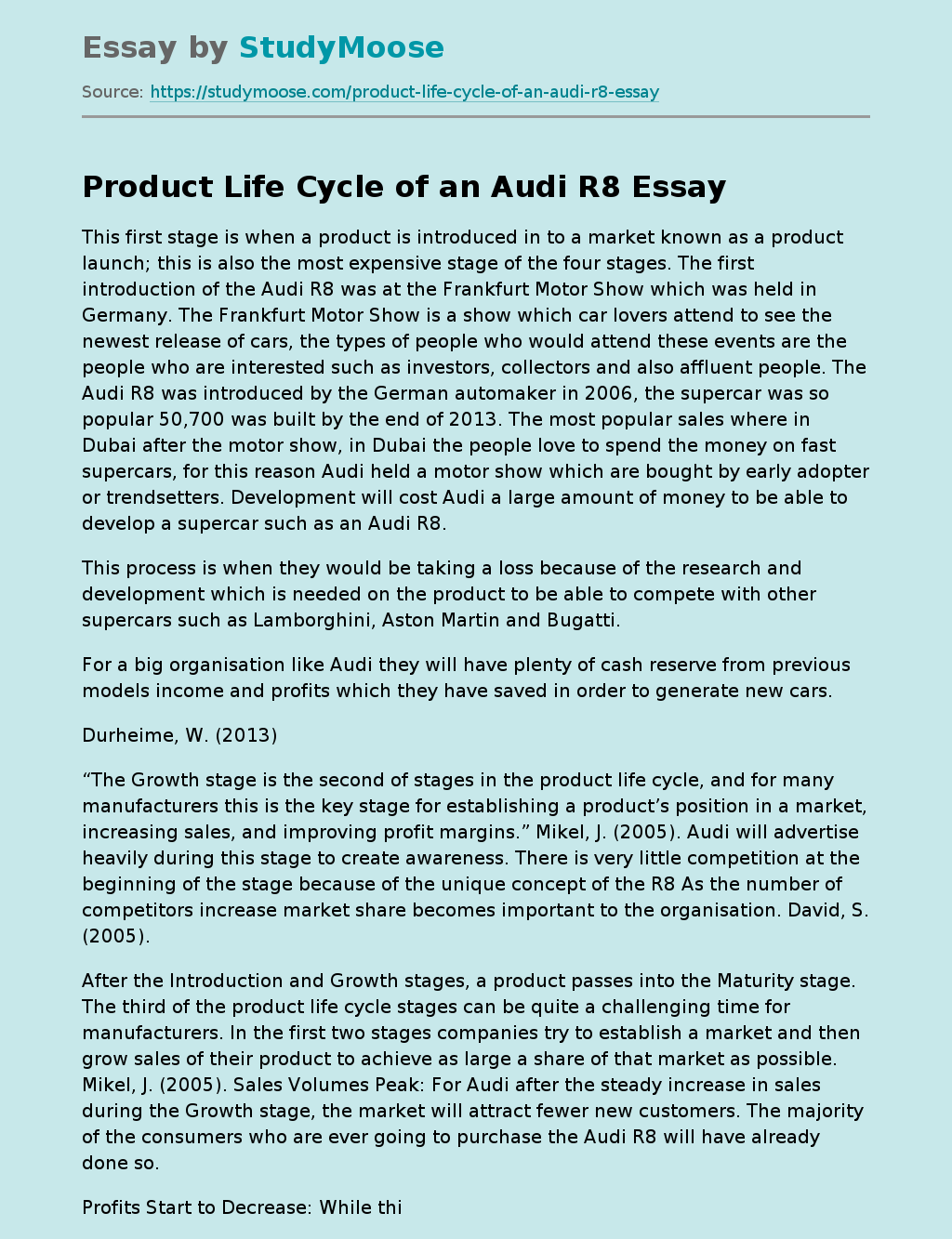