Problems In The Philippines And Its Causes

Restated thesis statement.
Summary of poverty and its causes. Poverty is caused by the following factors: corruption, overpopulation, lack of education, and unemployment.

Poverty is a state or condition in which a person or community lacks the financial resources and essentials to enjoy a minimum standard of life and
well-being that’s considered acceptable in society. –Investopedia. (2014). “Terms beginning with P” p.4

Poverty is one of the major problems in the Philippines which should be solved. Because of poverty, people suffer from hunger and people live on the streets.

Turn in your highest-quality paper
Get a qualified writer to help you with
“ Problems In The Philippines And Its Causes ”
Get high-quality paper
NEW! AI matching with writer

“There is Bec, a 56-year-old visually impaired worker at the Department of Education central office, who was tutored at a young age by SPED-trained teachers Gerardo Consolacion and Ricardo Monegro.

The focused mentoring helped her cultivate a love for learning as she eventually earned her Bachelor of Arts degree from the Central Philippine University in Iloilo City. For over 30 years now, she has devoted her life preparing Braille materials for visually-impaired students in public schools.

There is also 54-year-old farmer Bert of Sierra Bullones, Bohol whose lack of education was no hindrance to his dream of a better life for his family. His desire to familiarize himself with various farming techniques led him to participate in the training programs provided by the Department of Agrarian Reform (DAR) and other agencies.

The various training Bert attended cultivated his preference for fertilizer from animal manure over the costlier chemical-based alternatives. He has, since then, used and advocated for organic farming in Bohol. These are people who, despite the hardship brought by destitution and disability, refused to use illegal means to survive and instead made themselves available for service to the country in their own little way.

They are people who played by the government’s rules – the rule of law – and benefited in return.

There is a term for it, and it is called “trust.” It is the acknowledgment that social mobility is possible through the coordinated efforts of government and civil society. The book, by virtue of inherent limitations in form and volume, fails to document the thousand other Filipinos fighting their way through bureaucratic hurdles and “falling through the cracks.” Then again, that is not what the book is for.

It makes no mention, for instance, of those on the opposite side of the spectrum: people who have abandoned all hope. This is precisely because the stories featured are meant to build trust and a resolve to overcome poverty.” –Bernal. B. (2013). 18 stories of Filipinos overcoming poverty.

Corruption is a cause of poverty in the Philippines. The government raises the tax and all the other expenses of the people but do not use the money for the benefit of the people. They use the money for the benefit of their own. They keep it for themselves and tell the people that they worked for the money they have. Corruption leads to poverty in a way that the people’s money is being kept and used by the people who are just using their position in the government to be rich. All they care about is their selves. They do not care about the people suffering because of what they are doing.

“Former President Gloria Macapagal Arroyo of the Philippines was arrested Thursday afternoon on corruption charges related to allegations of misuse of $8.8 million in state lottery funds during her administration.” –Floyd W. (2012). Philippines Ex-President Is Arrested in Hospital on New Charges.

This news tells that even the highest official can do corruption. This is one of the reasons why there is poverty in the Philippines. The officials are not honest to the people of their country. They keep the money of the people for their own and let the people suffer. They use their power to flee themselves from the consequences that should be given to them. They are stealing from their people. They should be punished and suffer from the same thing that the people are experiencing because of what they have done. All they think about is their selves. They do not care whether they are making other people suffer. What matters to them is they should be able to do what they want to do.

Another cause of poverty in the Philippines is overpopulation. People do not plan on what they want to do with their future families. They do not plan on how many kids the want to have and can support all through their lives. What happens is they make babies, more babies, and then afterwards they won’t have any money left to buy food for their family. So every member of the family suffers.

“Most developing nations have large number of people who are illiterate, live below the poverty line and have little or no knowledge about family planning. Getting their children married at an early age increase the chances of producing more kids. Those people are unable to understand the harmful effects of overpopulation and lack of ignorance prompts them to avoid family planning measures” –Overpopulation. (2014).

“There are a lot of reasons as to why the Philippines is overpopulated. One reason, or I was able to think of, is Pre-Marital Sex. We learn from the Bible that sex before marriage is a sin and yet a lot of people do it. Some happens accidentally but some do it on purpose. Another cause of overpopulation is unprotected sex. Maybe one of the reasons as to why people do it is mainly just because of pleasure. Come to think of it, I ask myself ‘why do they do it when they know that it could actually lead to something bad?’

This is a cause of overpopulation because the child born was just mainly an accident. These couples did not want to have a child in the first place and that one child is a big contribution to the country’s population. Another main cause that hit me the most is those families on the poverty level still manage to get a child when they already have fiver or even more to take care of. They keep on making children when they know themselves that they are only limited to a number.” – Whang. C. (2012). Overpopulation in the Philippines.

Pre-Marital Sex is caused by lack of education when it comes to sexual education. Lack of education is another cause of poverty. Most children have no opportunity to study. They can’t go to school because they have no money and no one is helping them, especially the government. If they do not study, they won’t be able to get a job in the future. And then they will suffer again from the same problem, poverty. If the children will not learn anything especially the lessons about pre-marital sex, there is a big chance that they will try it at an early age out of curiosity.

“The biggest cause of overpopulation in the Philippines is the lack of education. People there don’t have the knowledge on how to use contraceptives. The big and powerful Roman Catholic Church (which basically controls the country) disapproves of any form of sexual education and birth contraceptives. This explains the lack of sexual education and the government constant refusal to provide free birth control for its citizens.” –Anonymous. (N.D)

The church disapproves to sexual education which is why the children have a lack of knowledge when it comes to sexual intercourse. Sex education somehow must be taught to children when they are already at the right age for them to know the effects of pre-marital sex.

“Unemployment creates a lack of financial stability, leading to a downwards spiral in social mobility and eventually poverty. The unemployed will have a lower standard of living than most employed people. Lack of a regular income leads to the inability to be able to maintain the basic needs, including fundamental provisions such as eating healthy foods, buying into health care and providing adequate heating for the home. While there are many types of poverty, the reasons behind poverty are always a lack of money. It is possible to live in poverty even with employment. A low paid worker may suffer much the same hardships.” –Anonymous. (N.D)

When a person is unemployed, he will have no income to earn for himself. Being employed is a very important way to prevent poverty. When you are employed, you are going to earn money. You will be able to supply all your needs in everyday life. Unlike the unemployed persons, they cannot supply themselves with all their needs. Unemployment leads to poverty because when a person has no job, he will have no money to buy food and no shelter to live in, he will have to depend on the help coming from other people.

Problems In The Philippines And Its Causes. (2016, Sep 09). Retrieved from https://studymoose.com/problems-in-the-philippines-and-its-causes-essay 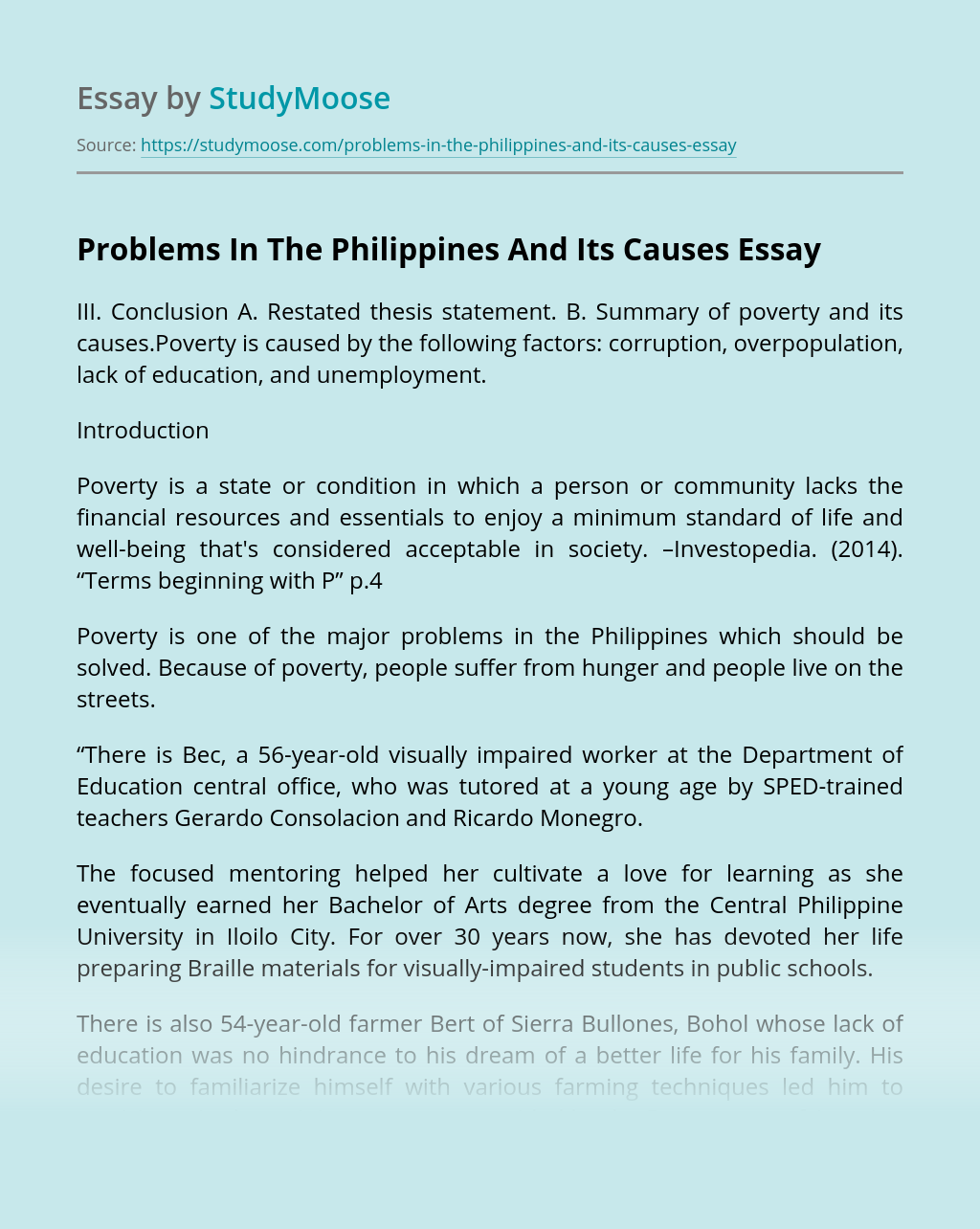 Turn in your highest-quality paper
Get a qualified writer to help you with
“ Problems In The Philippines And Its Causes ”
Get high-quality paper
Helping students since 2015
Stay Safe, Stay Original