The effects of the Irish recession on the manner in which people are managed at work and on how they are represented by trade unions is the subject of this study. This study examines how human resource managers and unions (where they are found) have faced the challenges. First of all, the impact of the international financial and economic crisis on the Irish labor market is assessed.

Then, the Irish economic crisis is placed in a comparative European context to get a sense of the extent to which the public policy response in Ireland has been similar to those pursued by other EU member states. After this assessment a detailed literature review is conducted on reviews and debates concerning the impact of recessions, past and present, on the conduct of human resources in organizations. This is followed by a detailed examination of the type of policies and practices that are available to HR when making adjustments to difficult business conditions.

The research has used a survey conducted of managers with responsibility for human resources to assess their responses to the recession. The survey firstly sought to examine the impact of the recession on firms in terms of revenue and employment change, in order to establish the commercial context for any recessionary measures adopted. The subjects of examination are then the types and incidence of measures taken by firms, ranging from pay and headcount adjustments, changes in HR systems and functions, to changes in working time arrangements.

The responses of the firms reflect the severe effects and challenges experienced by the survey respondents. This is followed by an investigation into the role of the HR function in the recession. The section explores whether the operation of HR has changed as a result of the recession, the function’s level of influence in terms of HR strategy formulation and implementation, the business role of HR, the level of engagement with employees, types of policies and practices that have received greater or lesser attention and relationships with trade unions. Finally, the HR practices that survey respondents considered to be most effective in helping them manage the recession are investigated. Examination of the effects of the recession, as experienced by thirty HR managers, representing a wide range of businesses, who participated in the different focus groups is entailed. It reviews, in detail, the effects on HR of acute cost, headcount and productivity pressures and the range of retrenchment measures that they were required to put in place. The research then examines HR managers’ understanding of what constitutes ‘good human resource practice’ in recent and current recessionary conditions. The main HR practices that were identified in the literature include — wage adjustment; employment adjustment; re-organization of working time; workforce stabilization; employability; voice and engagement; and process or product innovation.

By and large, while most of the measures adopted were aimed at reducing pay costs in one way or another, Irish firms have been quite diverse with respect to the range of measures that have been implemented to steer their way through the recession. The survey results also show that HR mangers have been steadfast with regard to implementing the ‘softer’ side of HR practices.

This study focused on analyzing the impact of economic downturn on skills needs and training practices within different sectors in the South East, focusing on a mixture of sectors which were seriously affected by recession and those which might lead the recovery. The research consisted of two phases: the first involving quantitative analysis and literature review, and the second involving qualitative analysis of interviews conducted with stakeholders and employers. The research concluded that the Impact of Recession on Employers’ Current and Future Skills Needs and Training Practices is conditional. Small organizations are reported to be more likely to reduce training investment than large firms and commitment to training varies by sector, There is an increased demand for ‘short and sharp’ courses, Training opportunities are being targeted at senior staff and trainees, Employers are receiving high numbers of applications and using tighter screening criteria and Multi-skilling needs are developing as a result of expansion or contraction of business.

The impact of the economic recession on HR; Talent 2 and Ipsos MORI

This study is based on a survey. Senior HR professionals were asked about how the global recession is affecting their organizations and their people management strategies and practices. 200 senior HR Directors and VPs were invited to participate in the survey, and 73 completed it. The findings of the survey were that HR is greatly affected by recession in the economy. Three in five respondents felt that the current capital markets had a direct impact on their organization, with three- quarters also feeling they have a direct impact on HR. Similarly, the vast majority of organizations (95%) were either freezing, or decreasing, their annual HR budget, in areas such as training and development, external training, the use of external consultants, recruitment and HR systems. Evidence suggests this is likely to be the case regardless of what the predicted financial performance is for their organization. The top three priorities selected were Performance management; Leadership and management development; and Employee communication and engagement.

The Impact of the Recession on Employment-Based Health Coverage; Paul Fronstin 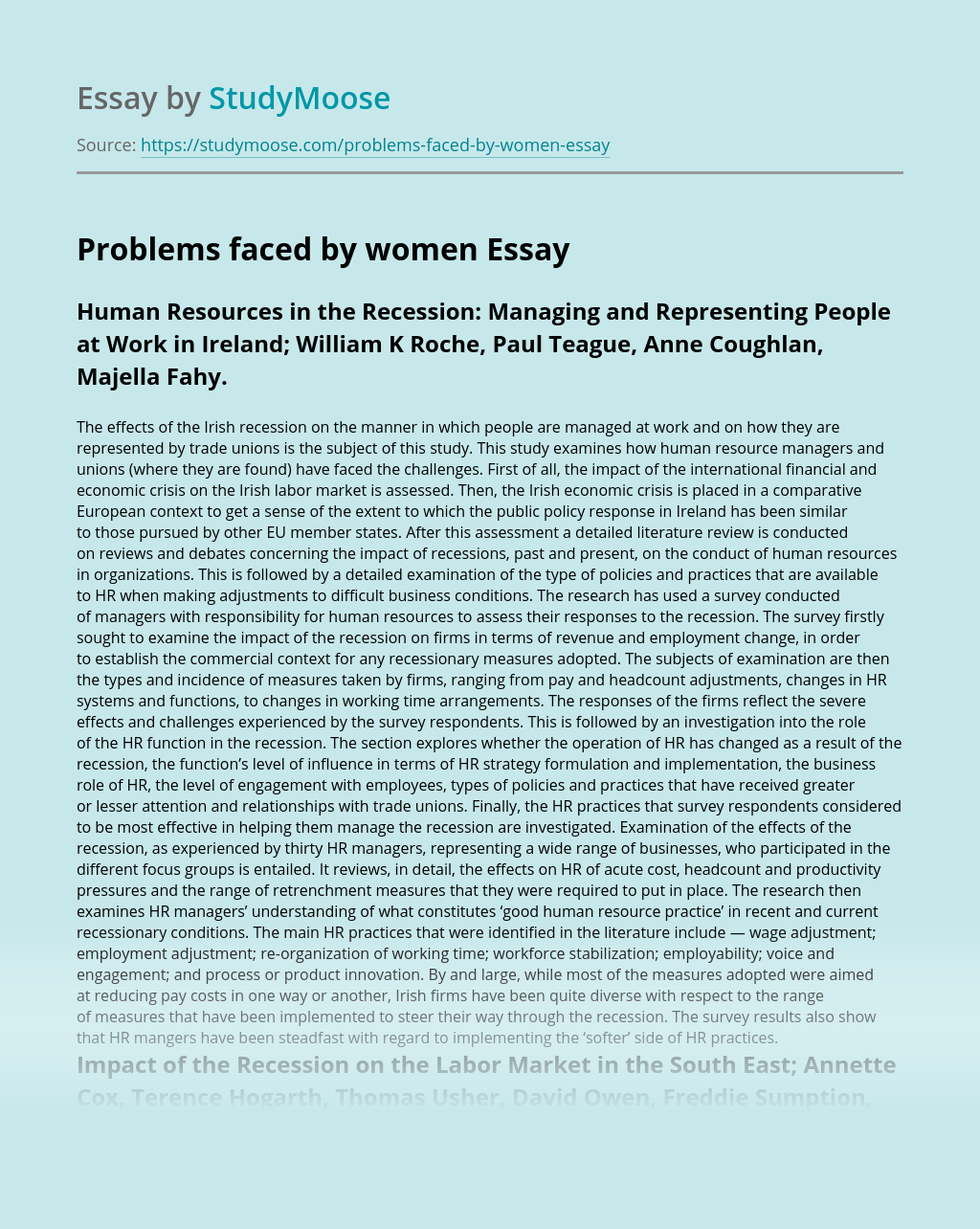 Don’t waste time
Get a verified expert to help you with Problems faced by women
Hire verified expert
$35.80 for a 2-page paper
Stay Safe, Stay Original