The Problem of School Bullying

Schools bullying can be manifested in various ways. Physical bullying involves violence, for example, shocks, strokes or hair pulling.  It can also be insulting. Last time schools cyber bullying can also face which is manifested in posting embarrassingly edited photos on the Internet. Especially girls are offended in such ways.

Anyone can become a victim of it, and it is useless to look for the cause of bullying in oneself. And even if the victim tries to change to please offenders, for example, a plump child called “fat” would begin to lose weight; this is unlikely to stop bullying.

Don't use plagiarized sources. Get your custom essay on
“ The Problem of School Bullying ”
Get custom paper
NEW! smart matching with writer

Offenders will come up with a new reason. There is no a well-founded reason for it, so the offenders can easily choose a new victim.

It was stated that offenders bull because of low self-esteem. In our time, the most common reason is called the desire to command and exalt yourself. The abuser can express his bad mood in this way. The victims of bullying, however, are prettier and friendlier than usual children.

Proficient in: Bullying In Schools

These are the features that are usually very useful in adulthood, but already in childhood, the victim himself can be a really good friend.

In any way, it should be stopped.  It is necessary to stop it not only for the sake of the victim but also for the offender himself. It is proved that on average the abusers in later life succeed much worse than others, for example, they already at a young age commit other offenses. Victims can suffer from injuries in adult life.

The situation of the victim is not easy. Imagine that a child who comes to school on a daily basis becomes the object of repeated violence/abuse, which in the case of adults would automatically be regarded as a criminal offense. In our time, school bullying in the form of physical violence occurs much more often than before, and require a more serious attitude. Violence also requires a police investigation. Verbal abuse, manipulation, and exclusion from games, however, are also very common, and these problems should be solved with the participation of teachers, parents, and classmates.

There can be different roles in such situation. One of the main is a victim. This is a child who is suffering from physical of oral mockery, whose clothes can be spoiled by offenders or who is insulted orally or on the Internet. The second role is an offender. This is a child who starts bullying and encourages others to do the same. Consequently, the following role is an offender’s comember. He does not start mockery but follows the ringleader.

He can be among the spectators and make fun of the victim along with the offender. The abuser’s companion can support the offender by being near and observing mockery, doing nothing to prevent bullying.  The next role is a defender. He is on the side of the victim and tries to stop the amoral behavior in any way. The last one is an outsider. He leaves the place of bullying at the very beginning, without telling anything to the adult and not trying to help the offended. Thus, even without wishing, he encourages it by his behavior.

This situation sometimes becomes a great surprise for parents. Although the relationship with the child can be very good, and it seems that he always talks about his ill health, it’s not easy to complain about school bullying. A child can not talk about it for the following reasons. He is afraid that there will be no benefit from the conversation, and interference will only increase mockery. He is afraid that his problem will be taken lightly. A child is ashamed of being an object of bullying, experiencing feelings of inferiority. He is afraid that the cause will be sought in him.

Many adults confirm that school mockery has affected their lives for a long time. Even people of retirement age remember it. It is quite normal that depressing memories arise at a time when your own child is going to school or becomes an object of bullying. Understanding how a person became an object of mockery and how this problem was solved can provide answers to many questions. The adult person for the first time starts to reflect on a problem of school bullying when his child is offended. Before this, the consequences of mockery were manifested, for example, in annoying shyness, fearfulness, anxiety, even a propensity for depression.

No Blame Approach strategy, based on the ability of the psyche to process the situation, finding the optimal solution has proven itself. The situation is analyzed with the involvement of all participants in the conflict, psychologist, and teachers. It is important that there should be no punishment after resolving a conflict. In the most severe cases, the problem of baiting in school is solved by transferring to another educational institution or even by moving.

The Problem of School Bullying. (2017, Jul 10). Retrieved from http://studymoose.com/problem-school-bullying-essay 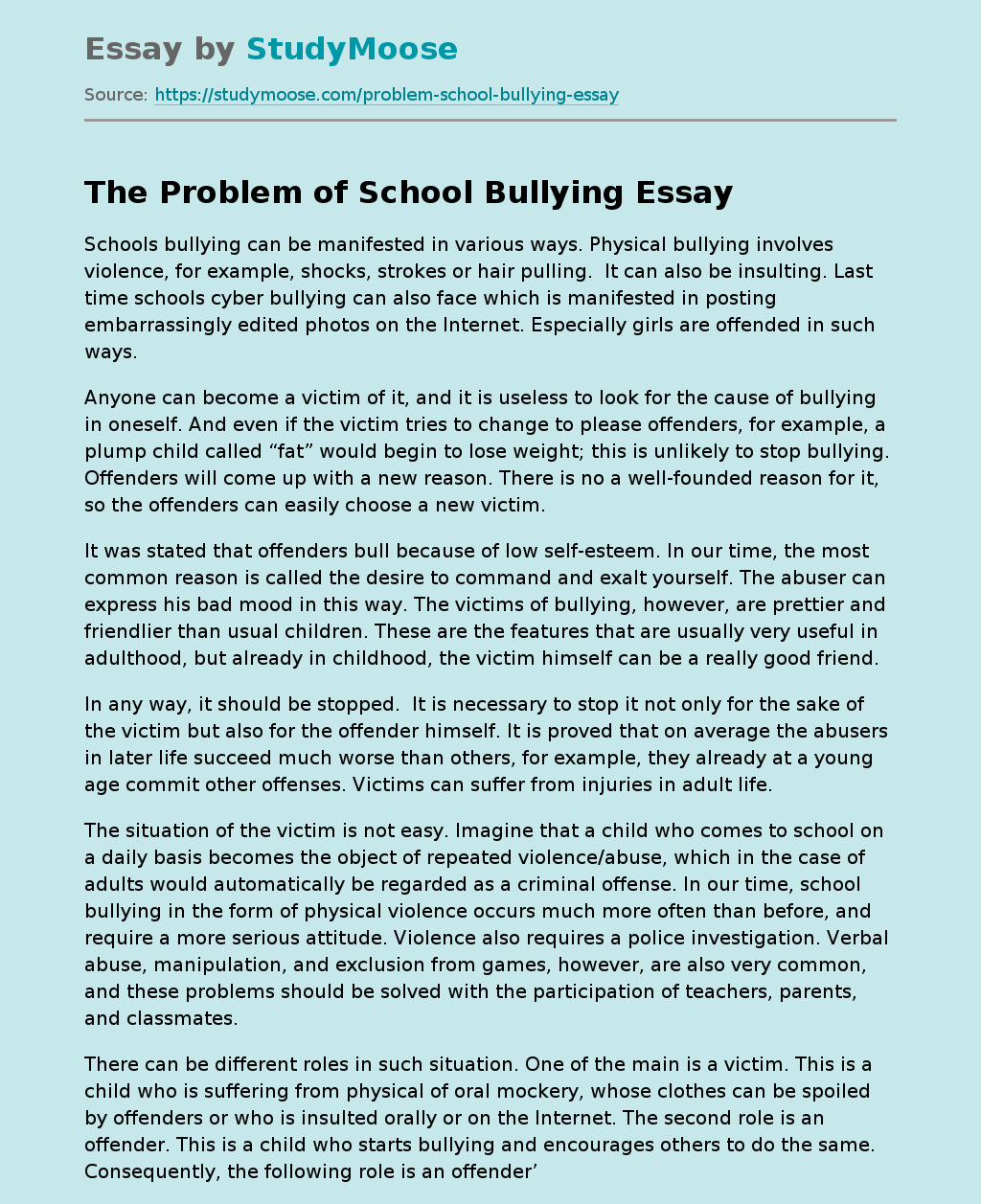