Problem-Oriented Policing of Police in America

According to Dictionary.com, “policing is to regulate, control, or keep in order with or as if with a law enforcement agency.” The art of policing has changed significantly for many different reasons but mainly to accommodate the times. Crime rates have gone up substantially when compared to 50 years ago. Much of the reason why this may be is the easy accessibility to gory movies, the glamorization of criminal activity, and the poverty that exists here in America. It is important as well as essential to devise strategies to counter the criminal activity with a solid plan for future stability of our communities.

Don't use plagiarized sources. Get your custom essay on
“ Problem-Oriented Policing of Police in America ”
Get custom paper
NEW! smart matching with writer

According to Gene Stephens’s article, Policing the Future, “When public policing was formally instituted in London in 1829, the emphasis was on preventing crime: the public and officers themselves regarded successful policing as the absence of crime, (2005).”

Although this concept was some time ago, it seems far fetched because nowadays when you consider crime in our communities, it is considered sensible to have a mere reduction of crime, rather than the absence.

This is true in all aspects of life, whether you are traveling or walking alone in the park at night, the most reasonable person often considers the threat of potentially being a victim of a crime. The purpose of this paper is to discuss the past policing issues and the way ahead in effective policing strategies. In addition, this paper will discuss factors that affect the increase of criminal activity, i.e. immigration and poverty. Lastly, this paper will discuss new strategy outcomes for the road ahead.

In the past, policing strategies did not have to work so diligently against technology. During the 1940s and 1950s, the information infrastructure paled in comparison to the current day super highway we negotiate today. However, the 40s and 50s was a time where organized crime spiked in activities such as extortion, racketeering, illegal distribution of alcohol and weapons, and other criminal activity. It is speculated that many attributes that facilitated this climb was because of the influx of immigration and the popular crime comics. The United States was and is considered a melting pot for people trying to migrate from other countries. The War Brides Act of 1945 and the Displaced Person Act of 1948 and in1950 initiated large populations of immigrants which allowed several hundred thousand immigrants from Europe, Canada and Mexico to enter the US. With little to no work for such a flooding of people, many were forced to turn to criminal activity to survive.

According to the Bureau of Justice statistics (2002), “Not only does immigration contribute to the poverty that breeds crime, but many aliens have criminal careers: 29% of the inmates are aliens.” Crime comics were popular comics books produced during the earlier 40s and 50s that depicted organized outlaws and plots of gangster activity which may have possibly developed a compulsion for acts of disorder. The American Medical Association, together with five other public-health organizations, issued a joint statement on the risk of exposure to media violence (Joint Statement, 2000). It is probable that crime will continue simply due to the need for blood shed and violence on the movie screen. The effect of continued feeding of this “growing monster” by the media is not likely to decrease anytime soon.

There have been many discussions that suggest that the future of policing criminal activity and disorder is a “fight” that can not be completely won; instead it is something that can only be reduced. There are several initiatives currently being utilized to mitigate and subsequently eradicate violence within communities. Problem–Oriented policing (POP) concepts are used as a “different approach to the complexity of the policing role.” (Walker & Katz, 2005).

In an article, Professor Goldstein stated that “Problem-oriented policing places a high value on new responses that are preventive in nature, that are not dependent on the use of the criminal justice system, and that engage other public agencies, the community and the private sector when their involvement has the potential for significantly contributing to the reduction of the problem.” (Goldstein, 2001) The key elements of POP that the police officer must focus on are:

This step by step process is designed as a means to deliberately and efficiently approach this concept. In the evaluation phase, the problem or the criminal activity is considered. The intent should not merely be a quick fix but identifying and dealing the source of the problem. Solid analysis is the consolidation of facts and circumstances that contribute to issues. The base problem must be completely understood during this function. Next, consider all developed and suggested responses should follow from what is learned during analysis. Lastly, the process of tapping into resources through surveying of neighborhoods and their residents, or soliciting assistance from community members and other government agencies. This will allow information sharing to take place and generate community responsibility and oversight. (Australian Institute of Criminology, 2004)

Policing strategies are used for many different means of control, discipline, and order in what is typically viewed as chaos. Policing needs of the past have changed along with the times. The reasons for policing can range from crowd control to war. Determining the underlying problems are a solid methodology in determining which policing strategies should be used. But some fundamental approaches through the utilization of POP will produce long term affects and prevent disorder by analysis and intervention strategies. The purpose of this paper was to discuss the past and present policing issues and the way ahead in effective policing strategies. In addition, this paper discussed factors that affect the increase of criminal activity, i.e. immigration and poverty. Lastly, this paper will discuss new strategy outcomes for the road ahead.

Problem-Oriented Policing of Police in America. (2016, Mar 28). Retrieved from https://studymoose.com/problem-oriented-policing-of-police-in-america-essay 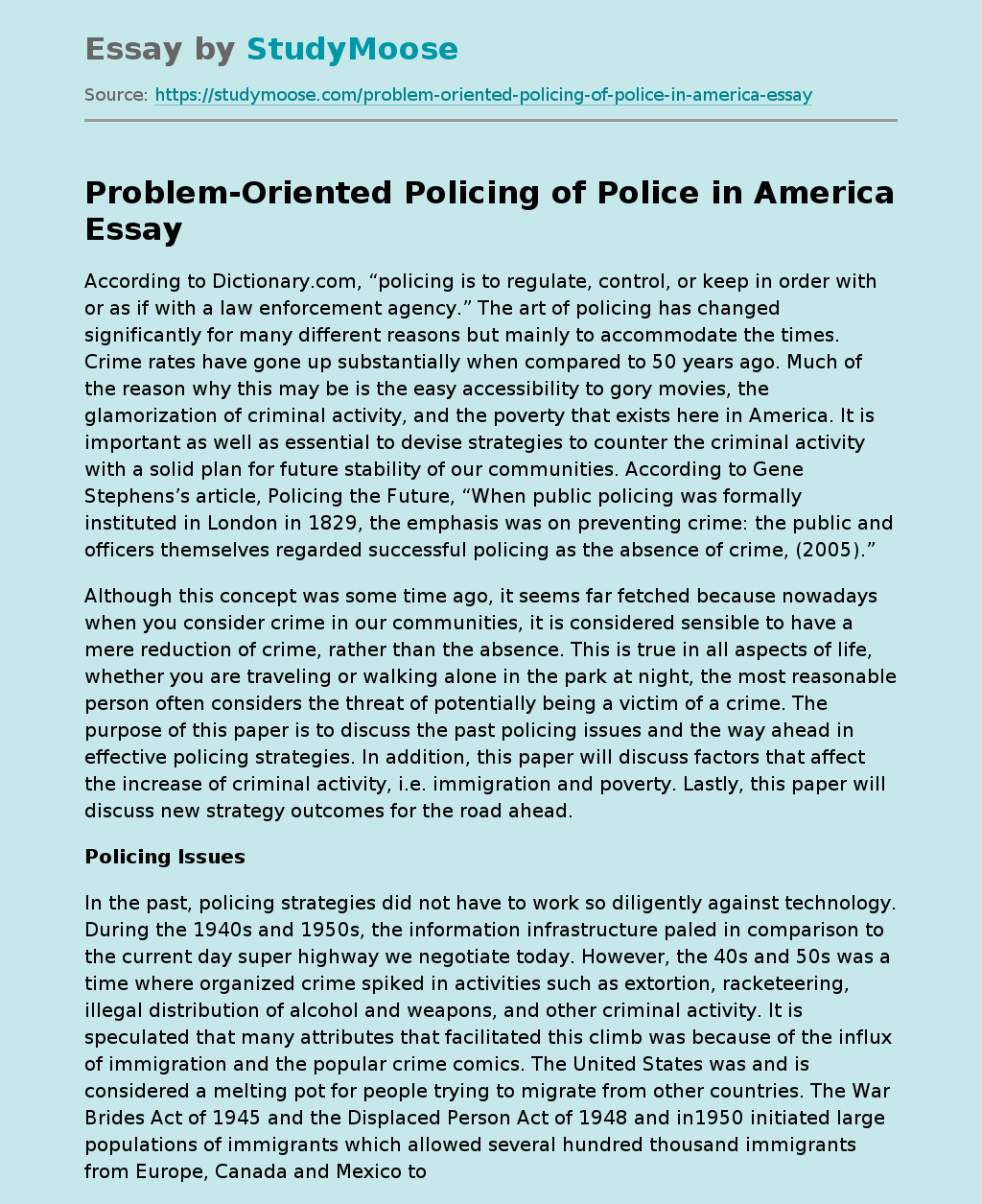