Advertisements are an everyday part of our lives, whether we look at them subconsciously or consciously they influence us. Imagine how many ads you have seen in your lifetime and how they have affected you over time. “Two Way a Woman Can Get Hurt” by Jean Kilbourne is an article about how the objectification of women in advertising can lead to violence because ads shows a truth and this truth is that women are more likely to get abused. Jean Kilbourne successfully attempts to inform women that objectifying people in advertisement makes violence seem acceptable by using logos and pathos.

Don't use plagiarized sources. Get your custom essay on
“ Problem of Domestic Violence in Jean Kilbourne’s Book ”
Get custom paper
NEW! smart matching with writer

However, her weakness is that she writes with too many hasty generalizations and also with some post hoc. Even though Jean Kilbourne has a couple flaws in her article, they could easily be fixed. Her arguments and writing overall is effective. Her strongest strategy in her article is how she uses logos towards women. She uses effective citing and true cases or events to prove her point that objectifying people in advertisements makes violence seem more acceptable.

She uses former surgeon general Antonia Novello “Battery is the single greatest cause of injury to women in America… and more than one-third of women slain in this country die at the hands of their husbands or boyfriends. Throughout the world the biggest problem for women is surviving at home. ”(428) She also uses a very strong argument from a 1998 study by the federal government that “…one in five of us has been the victim of rape or attempted rape most before our seventeenth birthday.

And more than half of us have been physically assaulted, most often by the men we live with. (430-431) And also in that study is states that, “three of four women in the study who responded that they had been raped or assaulted as adults said that the perpetrator was a current or former husband, a cohabiting partner or date. ”(430-431) These facts and statistics are compelling and prove to readers that women are living in a state of terror and not living up to their full capacities because of this. Also those women are not being respected as much as they should be and they are being turned into an object that could easily be used.

Also in the article she somewhat explains men and their side of the story. She shows through explains that women are not the only ones being objectified. She provides an example from a 1994 commercial where a bunch of women surround and cackle a male construction worker with his shirt off drinking a Diet Coke. Commercials are showing half naked men and women who are close behind lusting after them. She then uses Anna Quindlen to affectively explain her case who says, “Hatred by the powerful, the majority, has a different weight-and often very different effects- than hatred by the powerless, the minority.

She explains there is a big difference between women being objectified and men being objectified. The commercials towards men are almost humorous because there is no real danger towards most men, whereas women are almost always at risk. This is a strong argument because it speaks the truth and she has the sources to back it up. The next strategy Kilbourne does effectively in her article is using pathos. She evokes emotion really well and causes the reader to think deeper behind some of the advertisements that are put out there.

She uses an excessive writing style that makes the readers want to keep reading to see what happens next. One example is when she uses a junior high school student who was tormented by boys at her vocational school she writes, “’The boys would call me slut, bitch. They call me a ten timer, because they say I go with ten guys at the same time. I put up with it because I have no choice. The teachers say it’s because the boys think I’m pretty. ’” (439) This evokes emotion to the reader.

They could feel sadness for the girl because she has to go through with that at school, which is supposed to be a safe learning place. It could also make the reader angry because the teachers are not doing anything about the name calling and because they are not even punishing the students for using that kind of language at school. Kilbourne explains that there are sexual assaults on children at school as young as eight. This is a good point to use because it grabs people’s attention because that is such a young age for sexual harassment to start. It then creates an environment for girls to learn self-hatred.

Another really efficient story she uses to evoke emotion and create awareness is a case for a young female who was raped. The female was wearing Victoria Secret underwear which most people know have sexual ads that say the women will be irresistible if they wear them. A young man named William Kennedy Smith raped her and she was wearing Victoria Secret underwear. The jury acquitted Smith because the panties were an indication of her immorality. It was her fault she was raped because she was wearing underwear that made her “irresistible” to others.

This is one of her strongest points just because of the fact of how outrageous it is. This case is one of the most compelling in her article and probably also evokes the most emotion. Some would probably feel outraged and a bit concerned that a rapist could get away with what he did to that girl because of the type of underwear she was wearing. Kilbourne has many effective arguments, but the problem with her writing is she may get carried away.

She has quite a few hasty generalizations such as when she says, “Women are especially cruel judges of other women’s sexual behavior. (424) This is not true for every woman; she makes an assumption about the whole group itself. Also the males throughout the whole article she talks about them and how they see these advertisements that will make them believe they have this underlying dominance over women and that it is acceptable to treat them as sexual objects. She claims the ads will give them an idea that harassment or violence towards women is acceptable. This is not the case for all men. Not all men are going to see these ads and then all of a sudden want to go hurt women.

She makes it seem like all men are looking for dominance and women to be submissive. Her arguments would be more powerful if she added more statistics to prove that most men see these articles and are influenced more to see women as objects. Her other problem is that she has another logical fallacy called post hoc. In one of her arguments she says, “…violent images contribute to the state of terror. And objectification and disconnection create a climate in which there is widespread and increasing violence…the person is an object and violence is inevitable. (428-429) Again her argument would be stronger if she proved this by showing a statistic or study proving this argument.

However, she does not and it makes it so her argument is weaker and it becomes an illogical fallacy. Just because B comes after A, does not mean A caused B. That is what she is saying in her argument; because men saw the articles, the articles cause them to be violent. This is not necessarily true. It is a possibility that the articles contributed to the violence, but once again there is not proof and you cannot just assume that because of the articles the man became violent.

She does claim that the ads do not cause violence directly, which is almost contradicting herself because she was just saying it did cause violence, however, she could have elaborated more on explaining how ads influence violence. Throughout the whole article Kilbourne provides very controversial advertisements and explains the deeper meaning behind them. Such as an ad for possession shirts and shorts where a man is chasing a female who seems to be harmlessly enough having fun, but yet he is tugging on her clothes trying to take them off.

She has numerous ads like this which all make you think about the ads and how they are portraying the sexes, which is exactly her goal. She wants people to see the effects the advertisements are subconsciously or consciously having on people. Therefore her goal is effective. She is causing the readers to be aware of what they see on a daily basis. This makes Jean Kilbourne’s article “Two Ways a Woman Can Get Hurt” an effective one, with her use of statistics, cases, and evoking emotion from the reader. 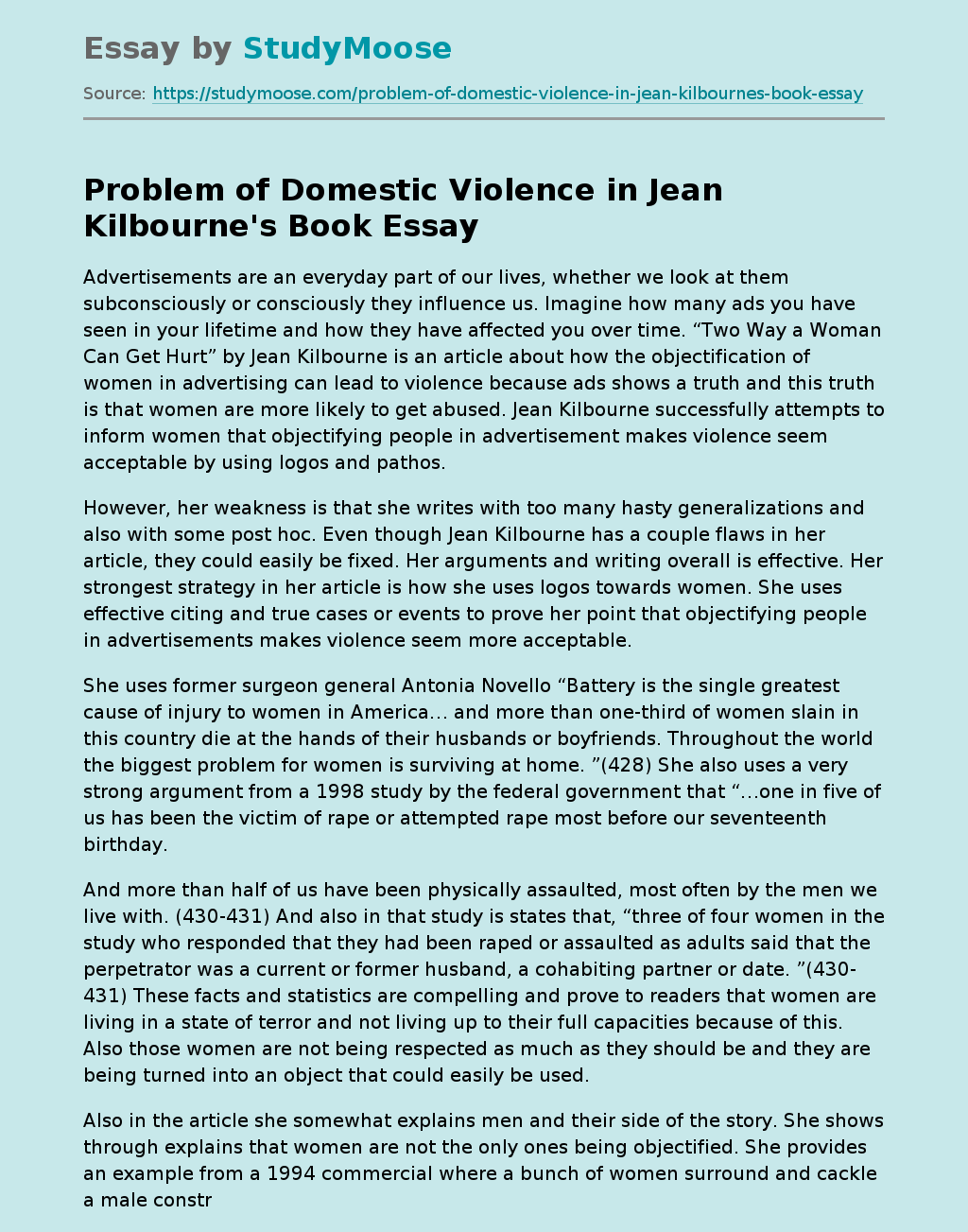