Saint mother Teresa was a Roman Catholic Nun. She had founded the Missionaries of Charity in Calcutta, India. Mother Teresa was beloved by not just Catholic’s, but also by non-Catholics. When she had died in 1997, at the age of 87, her efforts spread to over 120 countries. She had shared God’s love through the church with everyone she met. Mother Teresa had gone through some hardships that she chose to go through. She left the convent that she was safe in to help the poor and the sick.

Mother Teresa helped thousands of people in Calcutta, India. She spoke out against abortion and said,” But I feel that the greatest destroyer of peace today is abortion, because it is a war against the child, a direct killing of the innocent child, murder by the mother herself. And if we accept that a mother can kill even her own child, how can we tell other people not to kill one another? How do we persuade a woman not to have an abortion? As always, we must persuade her with love and we remind ourselves that love means to be willing to give until it hurts.

Jesus gave even His life to love us. So, the mother who is thinking of abortion, should be helped to love, that is, to give until it hurts her plans, or her free time, to respect the life of her child. The father of that child, whoever he is, must also give until it hurts.”

How to be pro-life? Being pro-life is not hard; you just have to be willing to fight against abortion.

The way to do that is to go to pro-life events like the marches that everyone who is pro-life attends. Another thing you try to do is to change pro-abortionist minds on abortion. That means you try to make them see that abortion is the killing of an unborn baby.

How does abortion affect women? Abortion changes the emotional state, women start to have suicidal tendencies that could lead to them committing suicide. Women who get abortions may also start to have drug addictions that could also lead to there death. They also may start drinking alcohol and abuse it. You may not even be able to say the word baby around them, because they might start to have an emotional breakdown. It may affect them physically too. They not are able to have another baby for the rest of their lives. It would help women who had an abortion would talk about it at the Pro-Life marches.

Does abortion affect the father? Yes, because the father of the baby should try to have a say in what his girlfriend or wife wants to do. Abortion can affect the father’s emotions as well. He may start to think he is a bad person and could start doing drugs, drinking alcohol, and start having suicidal tendencies that could lead to his death. The abortion doesn’t just affect him emotionally; it also affects him physically. He may start to eat less and start to hurt himself in other ways. He may even start to hurt others he loves and even the people who know him.

What are some other options than abortion? One of the main questions is what I had asked earlier in this paragraph. The most obvious is adoption. There are thousands of families that can’t have a child who would like to have child. Adoption agencies have hundreds of websites where you can contact the families of whom would like to have a child. The woman could let another family member raise the child until she feels ready to raise the child. Try to get support from the baby’s father, but if that doesn’t help go to websites that could help you find a support center to help you. You can also put the baby in a temporary foster care until you feel mature to raise the baby.

I made this essay, because I care for pro-life and I think women should choose other options than abortion. I think we should also live our lives like Saint Mother Teresa of Calcutta, and speak out against abortion. Abortion is a terrible thing that women wanted legalized. Abortion doesn’t just affect women; it also affects men who would like to have the child. Abortion is the wrong move to take when pregnant. 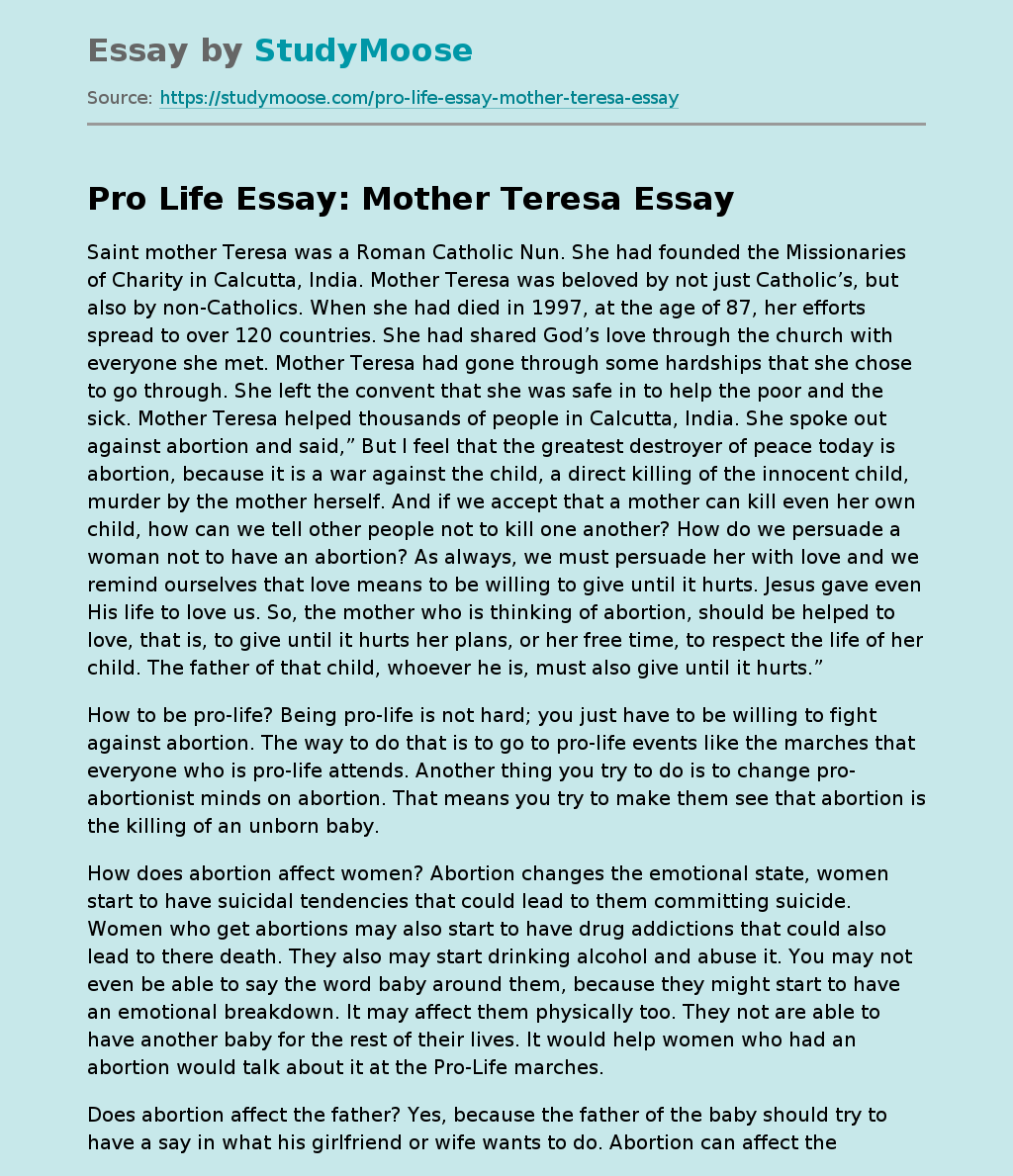