Abortion is one of the most disputable issues discussed all over the world today. Several decades ago abortion was considered only a social issue, but now situation has changed and it has also a political and ethical context. The issue of abortion does not become an important ethical issue as long as modern medicine has not provided its relative safety, and only now, in recent decades, the issue has inflamed a sharp public controversy. Thus, the main aim of this paper is to discuss pro-choice view on abortion.

Don't use plagiarized sources. Get your custom essay on
“ Pro Choice View On Abortion Philosophy ”
Get custom paper
NEW! smart matching with writer

First of all it is necessary to answer the question what an abortion is? Abortion is the termination of a pregnancy by the removal or expulsion from the uterus of a fetus or embryo, resulting in or caused by its death. Observing this topic we can see that there are many different points of views around this question and there are, apparently, three main positions on the issue of abortion. At one extreme we see the supporters of “preserving life” (people who have pro-life position) who would ban abortions in all circumstances: they believe that the government may not encourage the destruction of the embryo or fetus, legalizing abortion.

At the other extreme are advocates of “free choice” (pro-choice position): they believe that the law should not restrict the freedom of choice for the mother, because all pregnant women should have the opportunity to request an abortion. Intermediate position is occupied by those who believe abortion is permissible only in certain cases (for example, when the pregnancy is dangerous for the mother’s life or was the result of rape or incest), as well as those who believe that it should not be the main method of birth control.

In this part we are going to concern our attention on pro-choice abortion and according to Colker, we see that “Pro-choice abortion is the belief that women have the right to choose to abort a baby from their body. The “pro-choice” view is that a baby does not have human rights within the mother’s womb. The people of the United States never voted on or supported this pro-choice position. Actually, it was the U.S. Supreme Court that “legalized” abortion as a result of Roe vs. Wade on January 22, 1973.” (Colker, 1992). Analyzing contemporary situation it becomes obvious that movement for the legalization of abortion in recent years has also become a well-organized and politically active force: it is supported by a series of specially created organizations nationwide, and tens of major religious groups.

1. No person shall be entitled to compel a woman to preserve the pregnancy against her will.

2. We should not give birth to unwanted children.

3. Abortion was never subjected to the ban, if the legislators were not men. (Or, as one aphorism says, “if men could get pregnant, abortion rights would be considered sacred.”)

4. If a woman has no right to freely dispose of own body, including control of reproductive function, then there is no real freedom at all.

Advocates of abortion rights typically originate from the fact that the government should not intervene in the privacy of women deciding for them the fate of a pregnancy. They believe that every woman should have a choice – to abort or not, at the same time, they stress that such choice does not force anyone to a particular decision. In addition, it is noted that no one should be required by law to risk own health, and yet at the complete prohibition of abortion, many pregnant women are exposed to the dangers of childbearing and childbirth, as well as unsafe criminal abortions.

What supporters of pro-choice position have to say about how to deal with the right to self-actualization of the fetus, with its right to life, with its right to the pursuit of happiness? Pro-choice supporters proceed from the concept of social development of personality. Since the fetus has no idea about own future, about own personality, then it can not be self-consciousness. Once there is no consciousness, then the concept of consent to it is not applicable. (Jelen & Wilcox, 2003). Are these arguments are more persuasive than the arguments against abortion? Nobody can definitely say “yes” or “no”, because there is no one single view on this issue in contemporary society.

Thinking about different points of view on pro-life and pro-choice abortion Levitt & Dubner stated that pro-choice position allows to control criminal situation in the country. They explained that decades of research indicate that children from disadvantaged backgrounds are much more likely to become criminals than others. (Levitt & Dubner, 2005). Thus, abortions allow to control criminal situation in the country due to their distance effect, because years later, these unborn children are not replenished the ranks of criminals and crime stopped.

Debating this topic and looking at the problem from ethical and psychological side we should remember about the situation that the woman, who decided to make abortion, found herself in psychological crisis, and sometimes she is also found herself in a great despair, but we can contradict to above mentioned women other pregnant woman who wait for their babies and are full of happiness and excitement that in the nearest future they will become mothers and will see their little babies. There are many different people, and different situations, but there is one variable – child’s lifeâ€¦ It is necessary to think deeply about how it can happen that a child for one woman – is a great grief and they are willing to pay money for child’s death, but for others – child’s birth is so good that they go to any expenses to have a baby. It is a description of dual character of one situation around child’s lifeâ€¦

Thus, according to Staggenborg, “despite all the support for abortion, one of the important pro-choice facts is that those who raise pro choice issues to strengthen their cause are not pro abortion. They take the right to as a woman’s freedom to her body and life. However, we must remember that abortion should not cloud the sanctity of life. It is important to bear in mind the pros and cons of abortions before taking any decisions regarding one’s pregnancy.” (Staggenborg, 1994).

Taking into consideration all the above stated it is possible to conclude that in discussing the moral aspects of abortion we usually used many arguments in favor of one or another position. Whatever our personal view, it is important to be able to recognize the ways of argumentation in ethical reasoning, which in reality is not as logical as it might seem at first glance. It is necessary to remember that every human child should be wanted, nurtured, loved and cherished. In such a way birth control and abortion are the part of necessary policy in this direction. Choices in this case should belong to the pregnant woman, and only her wish to save or not to save a child should be the main argument in pro-choice position. 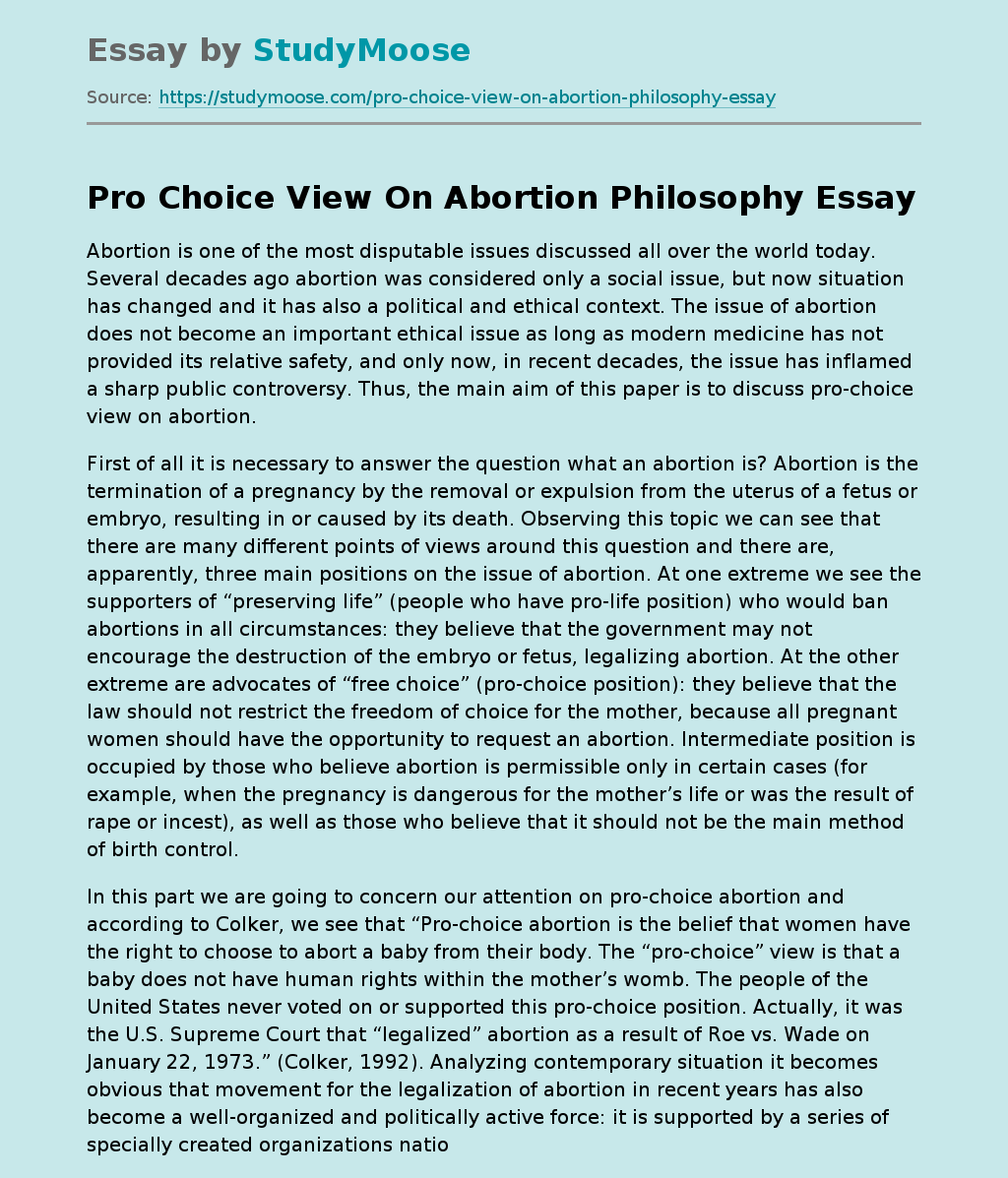