Society frequently discusses how “blessed” they are to relish in certain luxuries and gifts life has to offer. Demonstrating one’s appreciation and thankfulness is a positive deed, but at times, not being able to differentiate the concepts of luck and privilege conveys that one fails to take advantage of the chance to ponder on power and the elements that produce and preserve a divided community. The lack of understandment achieved through being privileged builds a community that is cruel towards one another, due to not comprehending each other’s misfortunes.

Don't use plagiarized sources. Get your custom essay on
“ Privileges and How They Protect Us from Misfortunes in The Men We Carry in Our Minds by Sanders and Politics of Muscles by Steinem ”
Get custom paper
NEW! smart matching with writer

This paper will aim to explain how privileges sometimes shield people from the misfortunes of others by providing analyses of The Men We Carry in Our Minds by Scott Russell Sanders, and Politics of Muscles by Gloria Steinem.

According to various dictionary websites, a privilege is a “special right, advantage, or immunity granted or available only to a particular person or group of people.” (“Definition of Privilege”, 2018). From the beginning, it’s substantially significant to acknowledge that privilege itself isn’t an inauspicious or a detrimental thing, and thus, those who are aware of their privileges shouldn’t be made to feel ashamed or embarrassed due to their privileges.

Rather, privileges should be distinguished as chances to nurture sympathy, expand comprehension of one another and contribute to addressing the inequalities that are ever-present in the community. However, most of the times this isn’t the case, and privileges often pave a pathway for people to be blind to the realities and misfortunes of others, leading them to be ignorant and inconsiderate on such matters.

An inequality that needs to be addressed globally is the never-dying inequality between men and women. Even though the society has come a long way from the days of not allowing women to vote and deem them as only housewives, there are still undeniable efforts to force traditional gender roles onto women and men, aiming to have women in a submissive and weak position within a male-dominated society. The Men We Carry in Our Minds by Scott Russell Sanders provides an excellent example as to how people tend to be blind to the inequalities faced by some due to their own life experiences and privileges. “The difference between me and these daughters was that they saw me, because of my sex, as destined from birth to become like their fathers, and therefore as an enemy of their desires.” (Sanders, 2001). Sanders explain a scenario where he begins attending college after spending a childhood in a poor farm, watching sturdy men work and deteriorate in front of his very eyes.

In the college, he was surprised at the attitude of majority of the girls, who believed that “men were guilty of having kept all the joys and privileges of the earth for themselves” (Sanders, 2001). Sanders was aware of there being men that were successful and lavish, but these men weren’t role models to Sanders; he experienced that the men of his class always ended up working in hard-labor jobs, and didn’t see the connection between himself and a lavish life. He didn’t understand what this privilege talk was about, “the miseries I saw, as a boy, in the lives of nearly all men I continue to see in the lives of many – the body-breaking toil, the tedium, the call to be tough, the humiliating powerlessness, the battle for a living and for territory” (Sanders, 2001). He was acknowledging of the fact that certain men did succeed, and they did indeed have more privilege than women, but they also had more privilege than men like Sanders; he couldn’t identify himself with them. Sanders still had the vivid image of the bright white of the white men’s clothing, guarding over the cotton-picking black prisoners; he had suffered his own inequalities at the hands of the very men who treated women with injustice.

As he continued his education within college, he did come to understand the inequalities women had to suffer through. Previously, he was unaware of the bullying, the social injustice, and the submission to weakness women had to go through on a daily basis, and his understanding of the matter led him to see where the women were coming from. The Politics of Muscle by Gloria Steinem is an influential essay that speaks of the forcing of traditional gender roles onto women, beginning from their very childhood. Steinem explains her own experiences where she faced gender inequality, such as when the girls in her school were only given the options of sports that mainly focus on body display, like being a cheerleader or a drum majorette. “Winning wasn’t about being the best in an objective competition or achieving a personal best, or even about becoming healthy or fit. It was about being chosen. That’s one of the many reasons why I and other women of my generation grew up believing – as many girls still do – that the most important thing about a female body is not what it does but how it looks” (Steinem, 2012). Therefore, one might perceive Sanders learning of the sufferings women went through as Sander’s blindness being lifted towards the unfortunate events women had to experience, which is true, but what one needs to also focus on is the blindness the women in Sanders’ college are exhibiting through their privilege.

Just because the women in Sanders’ college have successful fathers who can afford to send them to an expensive school without a second thought, who show to their daughters the lavish life they live, the women unreasonably believe that all men lead such lives. “They thought of their fathers, who were bankers, physicians, architects, stockbrokers, the big wheels of the big cities” (Sanders, 2001). Although the women are trying to underscore their sufferings and the injustice they face, they are being inconsiderate to what Sanders might have experienced within his lifetime. Women who were making Sanders feel guilty for the worldly pleasures that the men they associated with enjoyed were unaware of how Sanders was envious of women like them who were able to enjoy such pleasures like reading books and watching television, things he couldn’t partake in himself. The women are ignorant, and rather uncurious, as to why Sanders is unaware of the privileges most men have. Their experiences of being discriminated against due to their gender as well as their own privileges blocks them from seeing the prospective misfortunes faced y Sanders. And as Sanders points out at the end of his essay, he wasn’t an enemy to the idea of equality with women, rather he was supportive of it, but the women in his college who already have a presumption of him due to the privilege they believe him to have, they will always be unaware of his support.

As can be seen, Scott Russell Sanders’ quote “I was slow to understand the deep grievances of women” in his essay The Men We Carry in Our Minds rings true, as he was unaware of the sufferings of women due to his poor background and limited worldview. But it is also true to state the women making Sanders feeling guilty within his college were unaware of the sufferings of Sanders, due to their privileged background and limited worldview. Sanders’ and Steinem’s essays provide a great platform to reveal some of the misconceptions society holds due to their privileges. Sanders’ life-experience is the very evidence of why people’s privileges sometimes shield them from the misfortunes of others. However, this doesn’t mean that having privileges is a dreadful thing, but rather that it’s important to not let one’s privileges get in the way of understanding another person’s reality. Privileges can be beneficial in that they can enable a person to understand others better through effective communication, and contribute to addressing the inequalities that are existent within today’s community.

Privileges and How They Protect Us from Misfortunes in The Men We Carry in Our Minds by Sanders and Politics of Muscles by Steinem. (2021, Sep 13). Retrieved from https://studymoose.com/privileges-and-how-they-protect-us-from-misfortunes-in-the-men-we-carry-in-our-minds-by-sanders-and-politics-of-muscles-by-steinem-essay 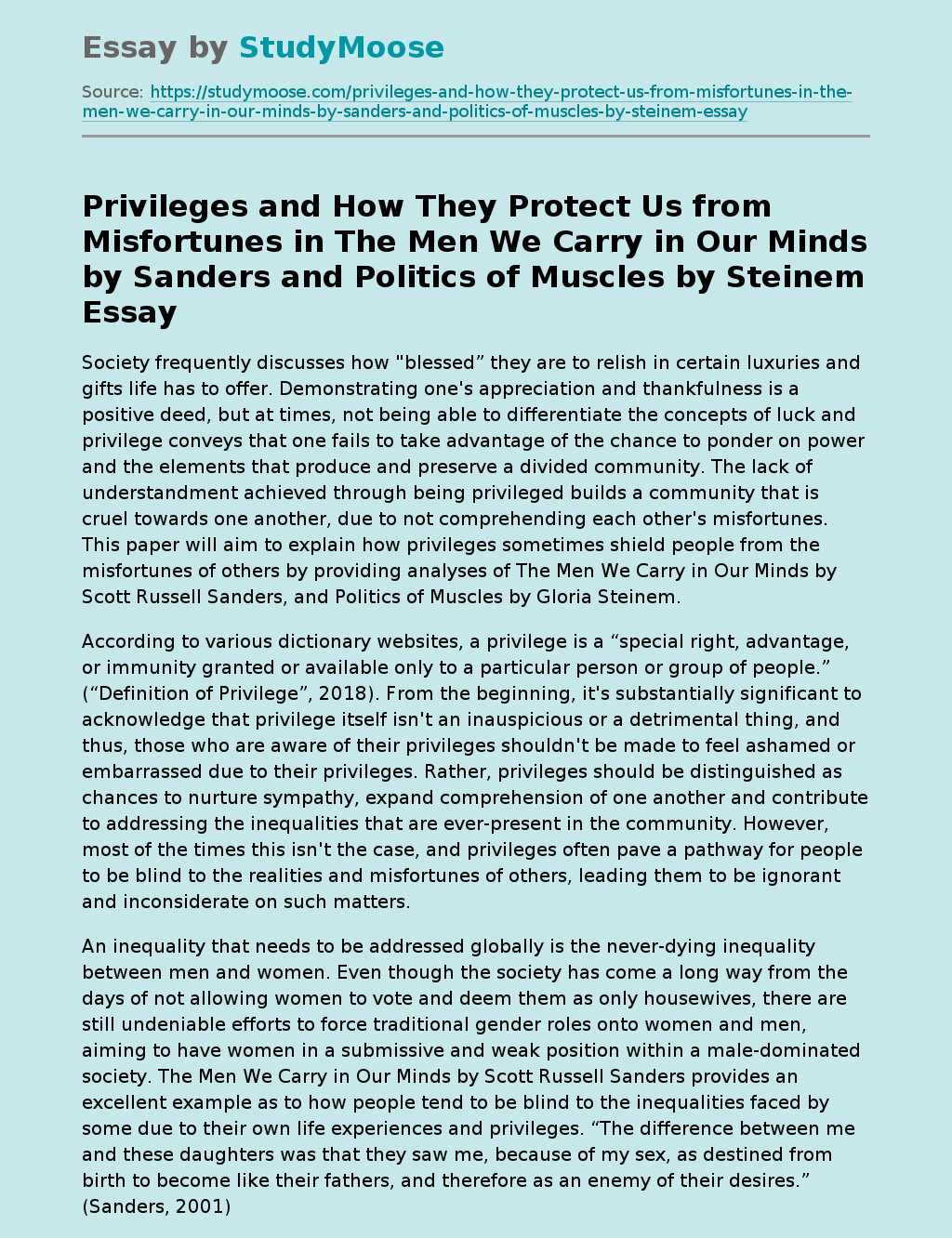