As you know all robberies are felonies and with the use of weapons brings tougher penalties towards the crime committed by the individual. While all robberies are considered to be violent crimes certain states took the initiative to raise the punishment when a violator uses a weapon of choice to rob. This means the person that is robbing you is more at risk of serving a greater prison sentence if he is caught and convicted. For the most part, many people do not realize that 40% of all robberies that are committed are strong armed robbery.

Strong arm robbery is known as taking or attempting to take anything of value from the care, custody, or control of a person or persons by force or threat of force or violence and/or by putting the victim in fear. In this paper, I will be giving a recommendation on a bill from the state legislator which involves criminals who commit arm robbery and I will not recommended the sentence to be doubled for the maximum prison term for anyone convicted of armed robbery.

Robberies can happen at any time and any place unexpectedly. And it really does not matter how it’s done.

The victim should always satisfy the robber by giving what the robber wants at the time of the attack without any hassle or lip. There are so many ways and places for a robber to attack. Even though a robbery could take less than one minute to attack the victim it is still a very wise idea that the victim does not create any hassle.

Most robberies that take place involve one robber and one victim. When robber’s attack, they usually like to hit areas that are private rather than public. And if it is a public place, the robber will make sure that there will be more than one or two escape routes for a fast get away. Most regular people think that all robberies take place in a bank, stores, gas stations, or restaurants that stay open late. However, most robberies take place in the street dealing directly with the target/person, which is another example of strong arm robbery if a weapon is involved. This is when a person who uses force or fear against the victim to get what they want. Is robbery a violent crime? I believe it is.

According to the 2006 FBI Uniform Crime Report, they say “the weapon of choice for robbers is a firearm at a high of 42.2% and knives or cutting instruments are second on the list at 8.6%. Strong arm tactics like punching, pushing, kicking or threats are used mainly on the street and that is at 39.9%.” While being robbed, robbers like to use force on their victims and also like to showcase their weapons. Robbers like to use weapons because it is a quicker method of getting what they need. And by doing so it increases the sentence of the perpetrator to a higher class sentence of strong armed robbery if caught. Also, let’s keep in mind, robbers are scared too when in the attack mode and have been known to hurt the victim when an attack is happening. This can also be another reason why the sentence should be increased to double maximum sentence due to the fact of unintentionally harmful acts you propose on the victim while using a weapon. And also, most of all, robberies are pre-meditated when time of committing this violent act upon victims.

There are different ways on how to commit armed robbery. Some of those ways are using a gun to rob a person, being wolf packed by a crowd of people/gang, using a knife or metal objects to rob the victim just so they can get what they want. By using an object and showing it off to the victim will allow a faster and easier attack at the time of the robbery. By doing so it will help speed up the process on getting what they want from the victim and still uphold a scheduled robbery under a minute. As far as my recommendation about armed robbery and if it should uphold a double maximum sentence, I will have to vote no. My reason is because armed robbery should already have a sentence attached on the type of robbery the attacker committed. Just because the attacker robs someone does not mean they should have to serve a double maximum sentence when caught. Whatever the sentence is now by law should be the sentence the attacker has to serve in jail.

Unless the attacker harms the victim in any way, then more penalties/punishment should apply to their criminal charge when being sentenced. I think this double maximum sentence should be more for the murder cases and child molestations/rape cases we have committed today. Those are more important crimes we should be looking at and for us to throw these type of punishment in those directions. We know that robbery is a common crime. We all know this crime will happen over and over again. But, we as the people and the law should make this crime more punishable by maybe adding a year more to the sentence when armed robbery is committed. It should be not a double maximum crime. Although, this crime is harsh, unpredictable, and dangerous for a victim to face when attacked. Looking through the eyes of a criminal advisor, no I do not think this crime should uphold double maximum sentence for armed robbery.

I think the crime should be based on what the crime is and what has happened during the crime when it was committed for more severe punishment. I know armed robbery is a serious crime and we all want to put a stop to it, but putting a double maximum sentence is going overboard. The reason I am against this bill and for it not to pass it is because I think the punishment is already set in our law guidelines. If anything, the punishment should be increase by a year so the attacker will know that this crime is serous when caught in the act of arm robbery and plus it will give them a little more time to think about not robbing someone else while back on the street. Let’s keep in mind most robberies are pre-meditated and by increasing the punishment one year might put into perspective that this crime should not be committed. 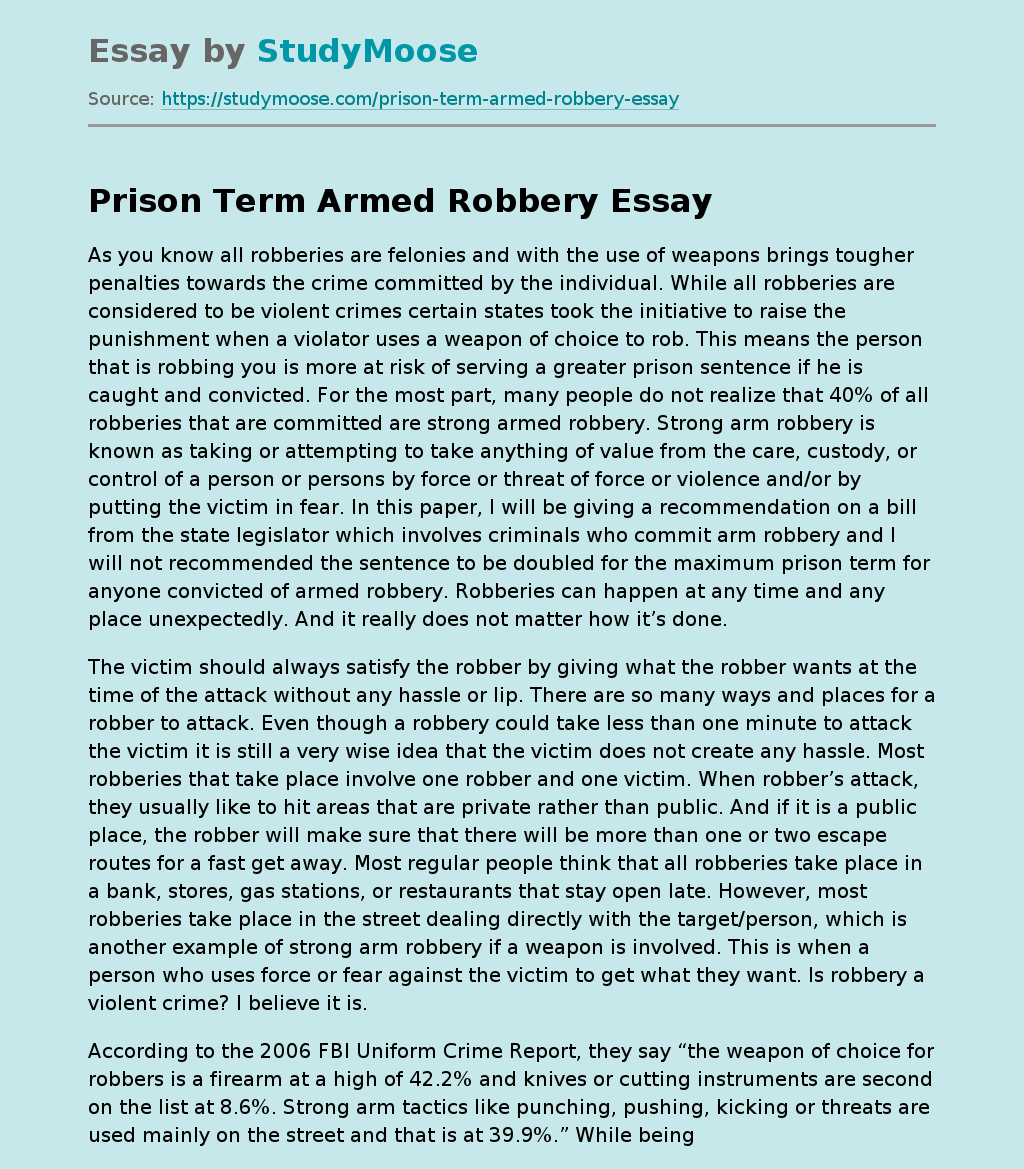