United States of America, what a beautiful place to live where great opportunities lie ahead of you and the American dream is right around the corner. Although United States of America is one of the most valued countries in the world with booming economy and intelligence, we face problems of our own such as homicides, terrorism, immigration, politics and etc. One of the biggest problems that we face today is prison gangs.

It is very important to know and to learn about prison gangs because prison gangs will gain a stronger hold in communities if communities do not structure intervention to include more than law enforcement suppression.

Don't use plagiarized sources. Get your custom essay on
“ Prison Gangs ”
Get custom paper
NEW! smart matching with writer

If that happens, street gangs may become better structured and drug gangs may become more powerful forces in the community (Fleisher & Decker, 2001). The purpose of this research paper is to knowledge the reader about the importance of prison gangs, overview of their organization & activities and finally contributes solutions to rising problem.

Importance and Effects of Prison Gangs

We often question ourselves, what is a prison gang? And how do they differ from the street gangs? Lyman (1989) defines that, prison gang is an organization which operates within the prison system as a self-perpetuating criminally oriented entity, consisting of a select group of inmates who have established an organized chain of commands and are governed by an established code of conduct.

Street level gangs honor and respect highly of the prison gang members and wishes to become a member of a prison gang one day.

Prison gangs influences and carries a great power over the street level gangs.

Prison gangs are also known as the “bad of the bad” to the street level gang members. The almighty, organized and professional prison gangs reign over the street gangs and on our society today and it is becoming a devastating problem. It has been estimated that, there are two million men and women serving prison terms in America (Fleisher & Decker, 2001). That is more than eighty percent of the population in city of Los Angeles. Criminologists argue that the criminals often do not have the power to control the destructive forces in their environment, which created their disabilities.

Which defines that many criminals are victims of family abuse and neglect, school disciplinary practices that expelled them before they had sufficient education to pursue a career, and impoverished neighborhoods well outside the opportunity networks in the dominant community (Fleisher & Decker, 2001). It is depressing to admit the fact that the community and their families may have created these law breakers, but however, few members of the prisoners became high risk organizations in our society and has become one of the biggest problems today.

Although the researchers have stated that “it was very difficult to obtain the data on the number of prison gangs and information about the prison gang,” through persistent and careful observation, a core-important information of the biggest prison gangs were able to be gathered. The prison inmates form groups and organizations based on their need for identity, belongings, personal interests and race. Fleisher and Decker (2001) stated that the first known American prison gang was the Gypsy Jokers formed in the 1950s in Washington state prisons and the first prison gang with nationwide ties was the Mexican Mafia in 1957.

Mexican Mafia and the Aryan Brotherhood

The Mexican Mafia gang eventually grew to be one of the biggest prison gang organization and focuses on criminal activities including drug trafficking and wars with other prison gangs. In order to become a member of the Mexican Mafia prison gang, one must have a sponsoring member and undergo a blood oath to prove his loyalty to the gang. The members of the Mexican Mafia frequently had tattoos on their right hands with the word “Eme,” and an eagle holding a snake in its mouth, symbolizing their organization. The Aryan Brotherhood of the Texas was the white supremacist group in California.

The Aryan Brotherhood gang members often had tattoos of a cloverleaf, swastika, lightning bolts and/or the letters “AB” on their bodies. The Black Guerilla Family became one of the most politically charged revolutionary gangs in history.

The Black Guerilla, Crips and Bloods

The Black Guerilla Family is an organized prison gang established by George Lester Jackson, a leader of Black Panther who united with the Black Liberation Army (BLA), Symbionese Liberation Army (SLA), and the Weatherman Underground Organization to create a powerful organization of the history.

The Black Guerilla were feared by many of the prison guards due to their demonic presence and continued to remain in control until today. Tattoos such as the “prison watchtower surrounded by a dragon with a quarter moon depicted in its body,” and “silhouette of a rifle with a sword lying over it to form an X,” symbolized The Black Guerilla Family. The famous, almighty and traditional Los Angeles street gangs, also known as the Crips and Bloods are also found in prison systems today.

Valdez (2009) examines that the two gangs, Crips and Bloods may war with each other while on the street, but however, there seems to be a truce and alliance between these groups inside the prison system and the probable reason for that is for their protection from the existing prison gangs. As these members in prison joined together, they insured protection and guide amongst themselves. In West Coast prisons, the Crips formed the consolidated Crip organization and the Bloods found the United Blood nation (Valdez, 2009).

As most of criminologists already know that the prison gangs dominate the drug business and drug trafficking, many researchers have argued that the most prison violence are due to the prison gangs. Motivated by a desire to make money and be at the top of an institution’s inmate power structure, prison gangs exploit the inherent weakness resulting from overcrowded, understaffed mega-prisons such as correctional staffer’s inability to watch these activities of the inmates every moment of each day, every moment of each hours to month after month (Fleisher & Decker, 2001).

Although I have not mentioned many other prison gangs and organizations, prison gangs continue to increase in numbers and it is continuing to become a big problem in our society. After all, prisons are institutions supported by millions of taxes in order to rehabilitate these criminals into a better person and keep them out of trouble, but unfortunately, prison system is where many street gang members learn the secrets of becoming highly professional criminals.

Fleisher and Decker (2001) states that collaboration between correctional agencies and university researchers is a key to creating strong solutions to the difficult, persistent problem posed by prison gangs. Further researches and studies in this subject are required and solution to the problem must be operationalized immediately to prevent prison gangs from gaining stronger hold in communities, become better structured, and become much more powerful forces in the community. As we all dream and hope to increase the quality of our lives, dangerous issues and problems must be solved in order to fully achieve peace in our communities. 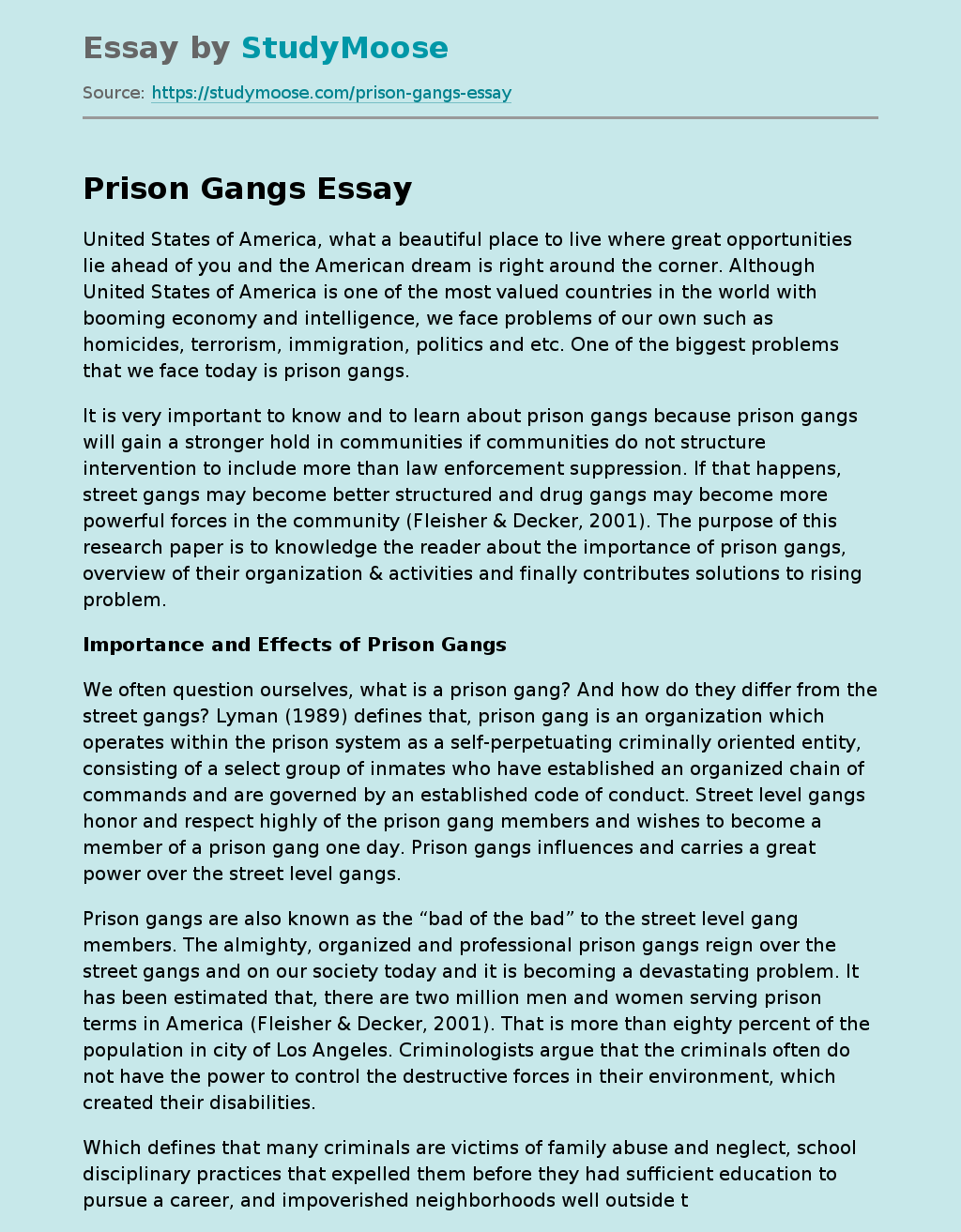