Principles of safeguarding and protection in health and social care Essay

Create a booklet about safeguarding, which can be used as a reminder for people who work in the care profession.

The booklet must:
Ai Describe in your own words what is meant by the following types of abuse:

• Emotional/psychological abuse –Verbal abuse to maintain power and control, taking empowerment away from an individual. Fear of guving opinions or speaking out loud…

Don't use plagiarized sources.
Get Your Custom Essay on Principles of safeguarding and protection in health and social care Just from $13,9/Page

Money keep on disappearing from a wallet.

• Self neglect – Not taking care of ones needs by themself. Poor hygiene, dirty clothes…

• Neglect by others – Needs being unattended to by people that could support & assist. Malnutrition, poor hygiene…

Aii Identify signs and symptoms of the different types of abuse Aiii Explain the correct actions to take if you suspect an individual is being abused If an individual is suspected of being abused, I should inform my superior and keep an eye out for any possible developments, try to bring the subject up in conversation with the individual in a sensitive & respectful way.

Aiv Explain the correct actions to take if an individual tells you they are being abused Listen calmly and patiently, try to comfort them, inform the manager of the home of what is going on, call the care workers & the police.

Av Identify how to ensure that any evidence of abuse is kept safe Make an accurate written record of any conversations that are relevant between the service user & I, ensure written records are in a safe place, body map any kind of bruising or injuries, try to keep it all as it was until police investigators arrive Avi Identify the national policies that set out requirements for safeguarding individuals. the ADSS-led national, ‘Safeguarding Adults’ network

Avii Identify the local and organisational systems for safeguarding Our Isle of Wight government is committed to the protection of any adult at risk of abuse as a high priority. Aviii Explain the roles of different agencies and professionals that are involved in safeguarding individuals Police, criminal (assault, fraud, theft, domestic violence)

Council, to protect people using their service – make sure they’re safe. Extend help where needed to support those experiencing abuse and neglect in their own homes Social Workers, To investigate actual or suspected abuse or neglect CRB, to check an individuals past to see if they have any criminal convictions. I as a care worker to support the individual.

Aix Identify sources of advice, support and information to help social care workers understand their own role in safeguarding Our company safeguarding file in the care office National charity working to protect and prevent the abuse of vulnerable older adults: Action on –Elder Abuse National helpline offering advice and support to vulnerable people who have experienced crime or abuse: Voice UK A range of information, advice, advocacy, and practical help services for older people:

Task B Research and Account
Identify two reports on serious failures to protect individuals from abuse.
Write an account that describes the unsafe practices in the reviews.

Abuse can happen anywhere anytime, but especially to vulnerable people, ie Children, elderly people, people with disabilities, people with learning difficulties. It can even happen in places people should be safe, ie hospitals, residential/ nursing homes, schools, daycare/ nurseries, centres etc. I researched two cases reported for abuse. The Winterbourne case which was nationally reported, and a local abuse case of East Sussex (Child G), the Winterbourne case was more of a physical an emotional abuse, whilst that Child Gs case was of sexual abuse of a child under 16 and abduction. The Winterbourne case was reported nationally because it was such a disgusting mistreatment of vulnerable people, 11 members of staff were caught on cctv after visitors and patients complained about mistreatments.

The evidence that was captured showed physical abuse such as, slapping, poking eyes, pulling hair, even as unbelievable as trapping them under chairs, and soaking residents in freezing cold water. It also showed emotional and verbal abuse in the form of name calling. This was an inhumane mistreatment of vulnerable individuals, the effective and humane delivery of assessments and treatments was not provided. The report which is published finds that Castlebeck Care Ltd (Teesdale) was not compliant with 10 of the essential standards which the law requires providers must meet. CQC’s findings can be found below. The managers did not ensure that major incidents were reported to the Care Quality Commission as required. Planning and delivery of care did not meet people’s individual needs.

They did not have robust systems to assess and monitor the quality of services. They did not identify, and manage, risks relating to the health, welfare and safety of patients. They had not responded to or considered complaints and views of people about the service. Investigations into the conduct of staff were not robust and had not safeguarded people. They did not take reasonable steps to identify the possibility of abuse and prevent it before it occurred. They did not respond appropriately to allegations of abuse.

They did not have arrangements in place to protect the people against unlawful or excessive use of restraint. They did not operate effective recruitment procedures or take appropriate steps in relation to persons who were not fit to work in care settings. They failed in their responsibilities to provide appropriate training and supervision to staff.

The centre was closed after NHS and local commissioners had found alternative locations for the clients acting in their best interest, there was a failure to report any of these incedents, staff that were not involved in the abuse should have reported it, knowledge about a crime and not doing anything about it is just as being a criminal yourself. The other report I identified was of a young 15 year old girl in East Sussex named as child G, she was abducted by her teacher Mr K in 2012, with whom she had been maintaining a sexual relationship with since around her 15 birthday, identifies serious concerns relating to school’s actions, including: failure to identify the abuse and exploitation of Child G;

fixed thinking; failure to hear concerns raised by students; failure to involve Child G’s mother; insufficient recognition of Mr K’s inappropriate use of Twitter to communicate with Child G; and serious concerns with the ways in which information was recorded, stored, retrieved and provided for the review. Identifies procedural failings in police handling of allegations relating to inappropriate images of Mr K on Child G’s phone. Makes various interagency and single agency recommendations covering: East Sussex Local Safeguarding Children Board, children’s services, school and police services. Mr K was found guilty of abduction and admitted a number of charges of sexual activity with a child under 16-years; he received a custodial sentence of 5-and-a-half-years.

Mental capacity
Difficulty to be able to protect themselves from abuse

Civ Explain how adopting a person centred approach which offers choices and upholds rights can empower an individual and help to reduce the likelihood of abuse. An empowered person is somebody that is not scared of expressing themselves, they are more likely to give there opinion and refuse or confront if there is any abuse directed to them. Cv Explain how encouraging and promoting active participation can help to reduce the likelihood of abuse. An individual by themselves is more prone to abuse, it is an easier victim, would have nobody to turn to for support or to confide in, nobody would really keep a close eye on somebody they don’t really have close. Cvi Explain how an effective and easy to use complaints procedure can help to reduce the likelihood of abuse. It makes it easier for the home and the care provider to be able to act fast and try to get a solution for any issue.

Principles of safeguarding and protection in health and social care. (2016, Apr 12). Retrieved from https://studymoose.com/principles-of-safeguarding-and-protection-in-health-and-social-care-6-essay 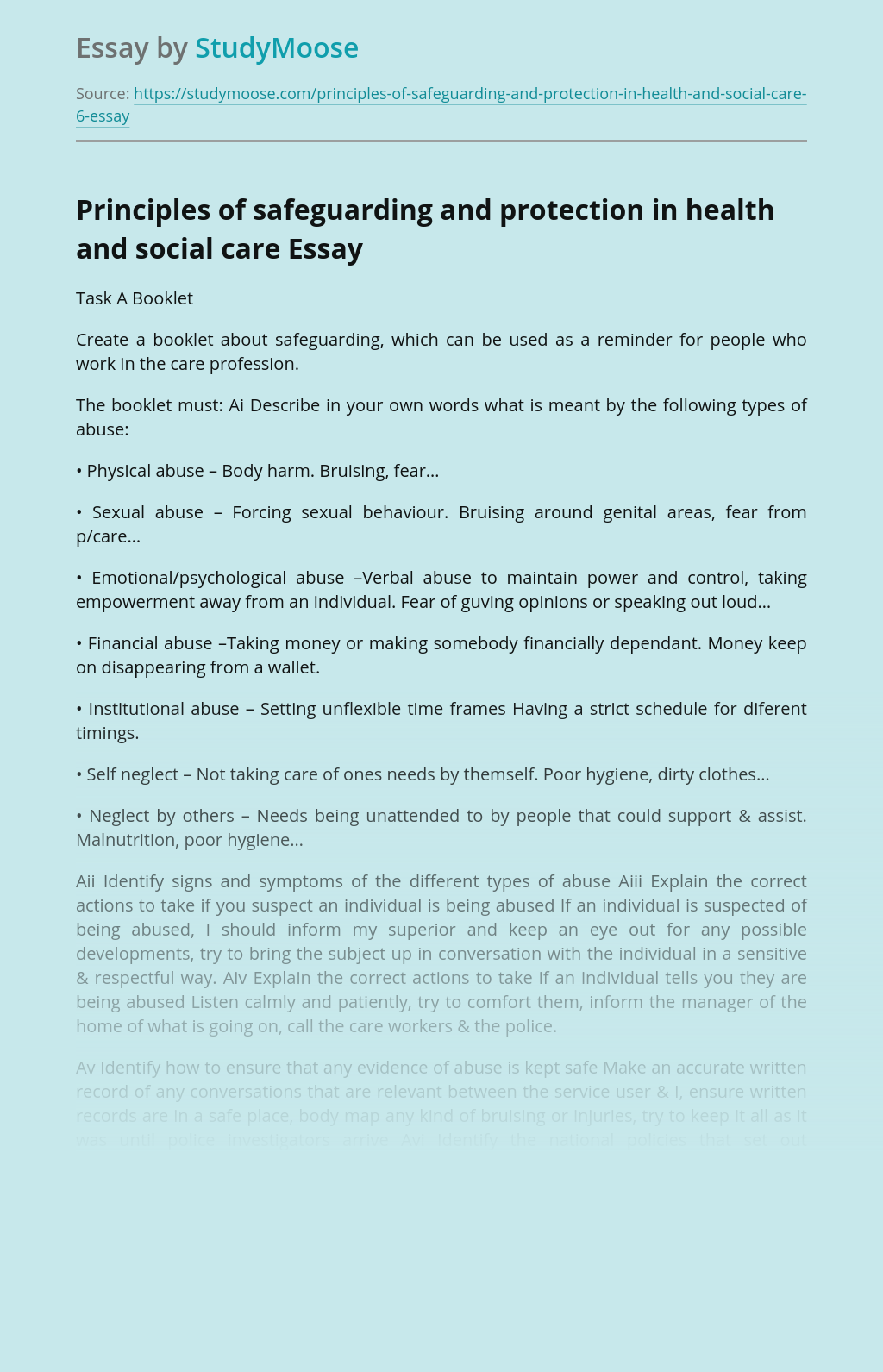 Arthur Miller's "Death of a Salesman"

Throughout Arthur Miller’s Death of a Salesman, Willy Loman tended to take advantage of practically everybody he can be found in contact with. He injured others constantly throughout this play for a range of various factors. Among his crucial targets was his other half Linda. From spoken to finical, Willy Loman abused his spouse Linda.... VIEW ESSAY

All rights reserved. No part of this publication may be reproduced or transmitted in any form or by any means, electronic or mechanical, including photocopy, recording, or any information storage and retrieval system, without permission in writing from the publisher. Design and typesetting by SCRE Information Services. Being bullied is a frightening experience. No-one likes... VIEW ESSAY

Durability is how a kid can manage the great and the bad things in their life and the ability to prosper and succeed even after facing set and challenges and is based upon self-esteem. The more resilience a kid is the better they are able to deal with reality situations in their life right up... VIEW ESSAY

Ragging in India is a damaging form of interaction of the seniors in college or school with the juniors, newcomers or first years. It is similar to but not same as hazing in the United States, it is not an initiation. It involves insults (simple or suggestive sexual, sarcastic and even physical), running errands for... VIEW ESSAY