Prince Sports is a leading tennis supplier in the international market. They have many products including racquets, bags, apparel and other accessories. They are leaders in innovation in tennis and have invented new racquet technology. Prince is excellent at catering to all types of tennis players, from juniors to professionals and everyone in-between. An environmental force that will work for Prince is the continuing growth of the population. The population is expected to continue growing which will provide opportunity for all markets.

Don't use plagiarized sources. Get your custom essay on
“ Prince Tennis ”
Get custom paper
NEW! smart matching with writer

The boom in technology in the 21st century has created an atmosphere where anyone can have access to information at any time. The quality and quanity of information on the web today is better than ever.

Smith is now able to use social networking tools, there is more advertising opportunity to communicate with their customers. As stated in the text, there is a large growth in tennis participation in recent years. “Tennis participation in the United States was up 43 percent- the fastest growing traditional individual sport in the country,” says Nick Skally, a senior marketing manager for Prince.

With increasing globalization competetors in the tennis industry could pose a future challenge for Prince. If Prince continues expanding in the global market place, especially if they sell to un-developed countries, they may have the threat of increased taxation, inflation or high exchange rates. It is important that they choose wisely where they globally market their product.

Prince is in a great position because there is an increase in playing tennis as a sport.

To continue the growth of the tennis industry in the US Prince should continue placing advertisements in stores like Wal Mart and Target, where they sell their products. They could also run more television commercials, and internet advertisements showing people having fun playing tennis with Prince gear. Promotional activities Prince could use to reach recreational players could include coupons for Prince tennis equipment in the newspaper or catalogs. They could host a charity fund raiser event at a facility with tennis courts, and give out freebies like t-shirts, and water bottles. Prince could place advertisements in popular adult sport magazines.

Promotional activities to reach junior tennis players could include marketing on common social networking sites like facebook and twitter. Kids generally watch a lot of tv and pay attention to tv, televison commercials showing high level juniors having a great time with their Prince gear could be a good promotional strategy. Running an event geared towards junior tennis players to try out Prince rackets could be a great way to promote Prince’s junior brand as well.

To gain distribution and sales in mass merchandisers like Target and Wal Mart Prince could have point of purchase displays in the sporting sections. Large advertisements in the store, coupons for Prince products. It is important to keep prices reasonable in large retail stores because chances are there will be other tennis options that are reasonably priced as well. In specialty tennis shops Prince could provide demo rackets, posters, detailed catalogs, information on racquets and strings. They could distribute other accessories to shops like bags, and sneakers. They could run deals at certain times, like if a customer spends a certain amount of money of Prince products, they receive a complimentary Prince bag. Prince could advertise their product in local newspapers or magazines, so that consumers know their product is available at specialty shops.

In evaluating new countries to aggressively market their products it is important to evaluate each market’s trade barriers like tariffs and quotas. These barriers could make the Prince product too expensive in certain countries and limit their exports. It is also important to understand the culture when considering countries to distribute to. If Prince’s products don’t suit a certain culture it is best not to select that country. Understanding the legal system of countries being considered is important as well. There are lack of civil, commercial and criminal codes in many countries, that Prince probably would not want to expose their company to. Countries that Prince may consider agressivley marketing in are, Canada, United Kingdom, and Brazil.

Once Prince decided upon countries to market in, depending on the countries atmosphere, they could place ads on billboards and in stores that carry their product. Advertisements on popular television channels and radio stations could be helpful in getting the brand seen as well. A great marketing strategy in other countries could be to sponser tennis players from those countries with Prince equipment. Then consumers in those markets would relate to the brand on a more personal level.

The Prince marketers are concerned with staying ahead of the curve and constantly learning and studying the market. They have covered all bases in the tennis market with their junior, recreational and performance lines. Prince is headed in a positive direction and is planning on continuing to expand and thrive in the global tennis market, with their quality, specialty equipment and the continuing increase of consumer interest in tennis. 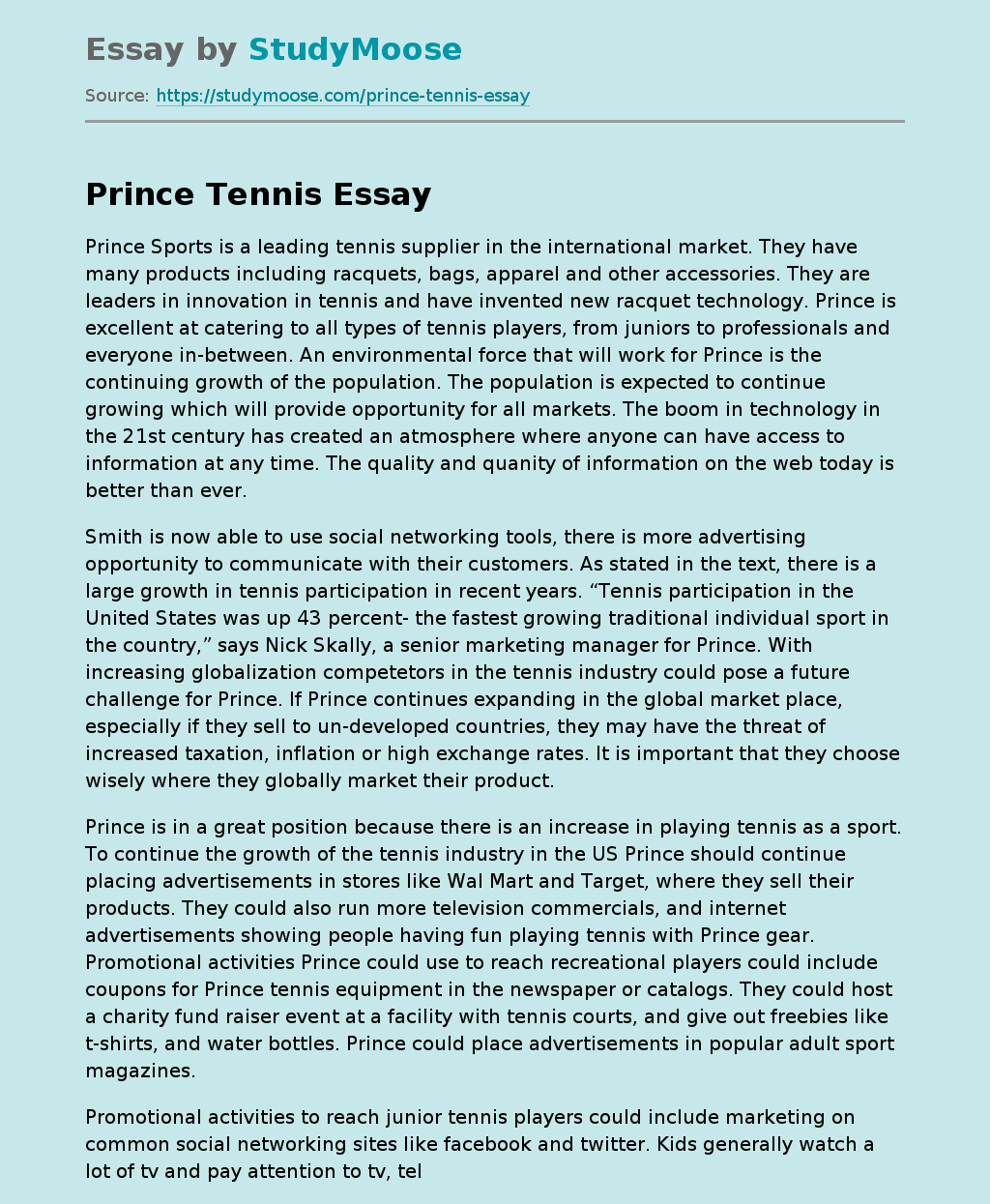