The Lex talionis or Law of Retaliation, it is the common reference to Hammurabi’s Law Code, infamous for its “Eye for an eye, tooth for a tooth” mentality. In this short Primary Source Analysis, I will answer the five questions given in. What are some of the laws that reflect that mentality of the Law of Retaliation? Beyond the obvious laws 196 and 200 which are about how if a man puts an equal’s eye out, or knock out their teeth, then the same shall be done to them.

There are several instances of fines or punishments for relevant crimes, such as law 198 “If he put out the eye of a freed man, or break the bone of a freed man, he shall pay one gold mina.” showing that a difference of rank results in a fine instead of a permanent physical punishment.

What does it seem like Hammurabi and the lawmakers wanted to preserve in their society? It would appear that there was a desire to show a difference between man and woman, and slave and freed man, which can be seen between the various laws describing the different fines between a crime against a freed man and a slave, as well as Law 129 through to Law 135 which describe the punishments and outcomes of a woman committing adultery and abandoning the household while the husband is a prisoner of war.

What do the laws suggest people were doing? There is a law which show a preference for artisans in regards to adoption, Law 188 “If an artizan has undertaken to rear a child and teaches him his craft, he can not be demanded back.

” suggesting that adoption was fairly common, and that a family that gave a child up might have the chance to rear the child again at a later date as long as an artisan didn’t adopt the child. There are also several laws that show that give the costs of renting various things, such as an ox and a sailor and his ship, as well as what happens should something happen to the rented thing and who owes who what. What people were treated differently in the Law Code?

Beyond the already mentioned laws that state the fines and punishments for injuring one of equal or differing rank, there are also laws that state the payment or costs of a physician succeeding or failing at a surgery respectively, Law 215 to Law 218. How does Hammurabi’s Law Code compare and contrast with laws today? A surprising amount of Hammurabi’s Law Code are comparable to the laws today, namely the fines for causing injury, financial or otherwise, to a freed man. However, a vast majority are much more drastic than the modern day laws we are used to, such as Law 218 “If a physician make a large incision with the operating knife, and kill him, or open a tumor with the operating knife, and cut out the eye, his hands shall be cut off” or Law 195 “If a son strike his father, his hands shall be hewn off.” showing a more ruthless ideal of justice, caring not for causing a permanent disability to one for a mistake or an action that many of us have done ourselves in the past. 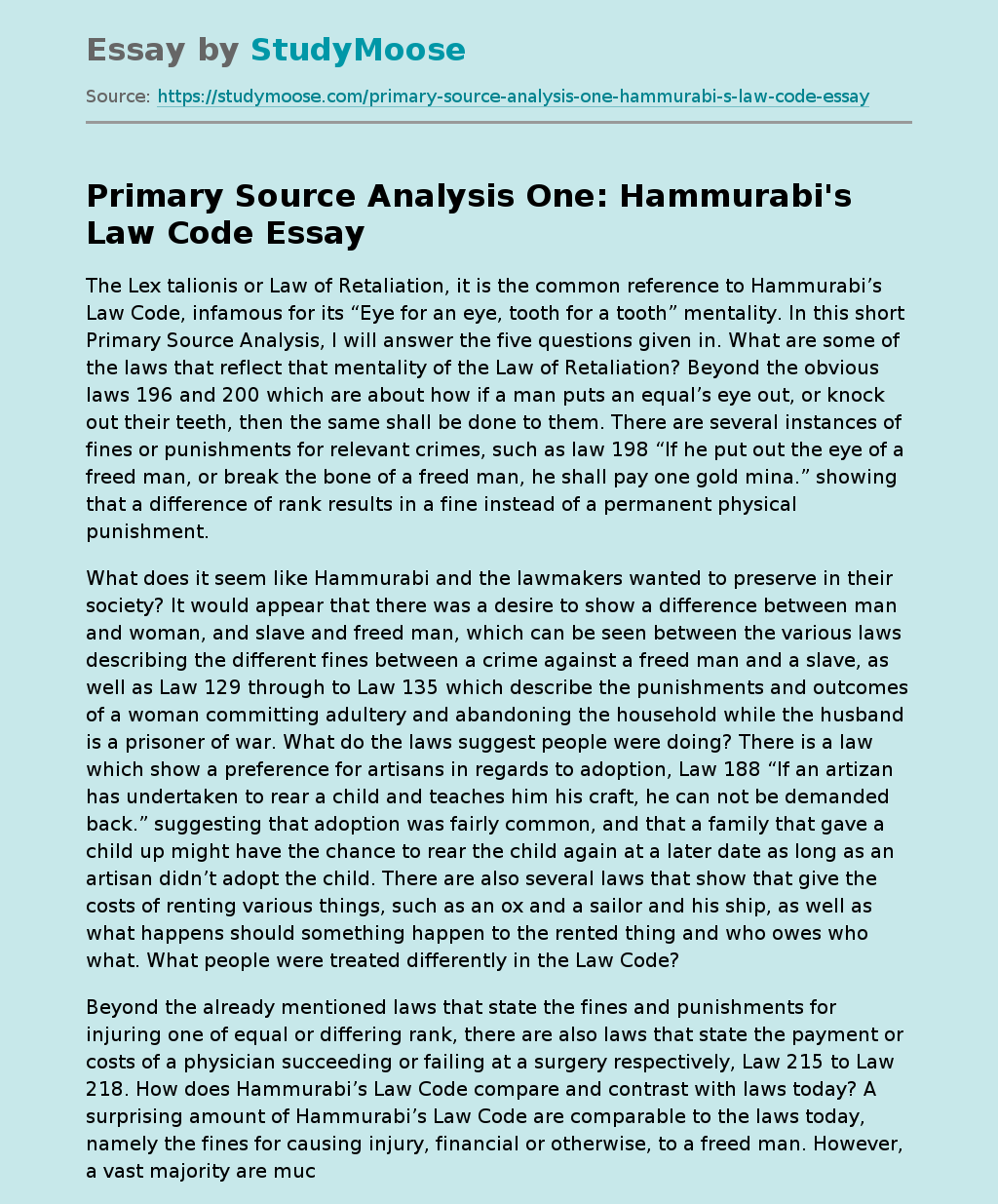