Fearon’s study particularly pertains to the evaluation on which particular countries are actually prone to undergoing situations such as civil wars. In this article, he along with his co-researchers found out certain elements that contribute to the increase of threat towards the possibility of a country undergoing a civil outburst. According to the said researchers, the most important issues that needs consideration on this part of the situation is the emergence of countries that are involved in primary commodity export appointments in the field of international trade.

Don't use plagiarized sources. Get your custom essay on
“ Primary Commodity Exports and Civil War ”
Get custom paper
NEW! smart matching with writer

Apparently, it is in this article that poverty has been noted to be a reactive result of several globalization approaches which also brings about the possibility of social chaos giving way to civil war. The bridge that was supposed to keep nations together through globalization is now serving as the strongest reason of gap between people around the world and even within countries. The widening gap is also producing serious consequences for the richer nations.

This is because of their growing dependence on the raw materials of the nations of the “Third World.

” But now these nations have changed their attitudes about how their resources will be used, and paid for. An example of this was the action taken by the oil-producing underdeveloped nations, sending shock waves throughout the industrial lands. For many decades, the poorer oil-producing nations had to sell their oil at a relatively cheap price. Recently, these nations banded together and agreed to quadruple their prices. The poor nations have laid down a clear challenge to the rich nations.

They will no longer passively accept what the industrial nations have assumed for more than two centuries.

That assumption was that there would always be cheap raw materials available from the poor nations. No longer is this the case. However, the dilemma of the poor nations is that most of them are not blessed with abundant raw materials. Most of them lack abundant mineral and oil resources. They are largely agricultural lands, and in bad years, they have nothing to fall back on to sell to other nations. Therefore, they will not have the money to buy the food and other things they need to help them in bad years. That is just what is happening now to various countries in Africa, Asia and Latin America.

The main idea of studying the way people live in the society is to see how far they have fared in making their way to progress. However, contrary to the aimed unified progress, development is usually shifted only to the “haves”. Yes, the world may be seemingly unfair, equality may even seem too impossible to be achieved, but through a unified effort, having an equal community could still be worked upon by the entire human civilization; something that is most needed to avoid possible outburst of civil war. Bibliography Fearon, James. Primary Commodity Exports and Civil War. Journal of Conflict Resolution, Vol. 49, No. 4, 483-507 (2005). 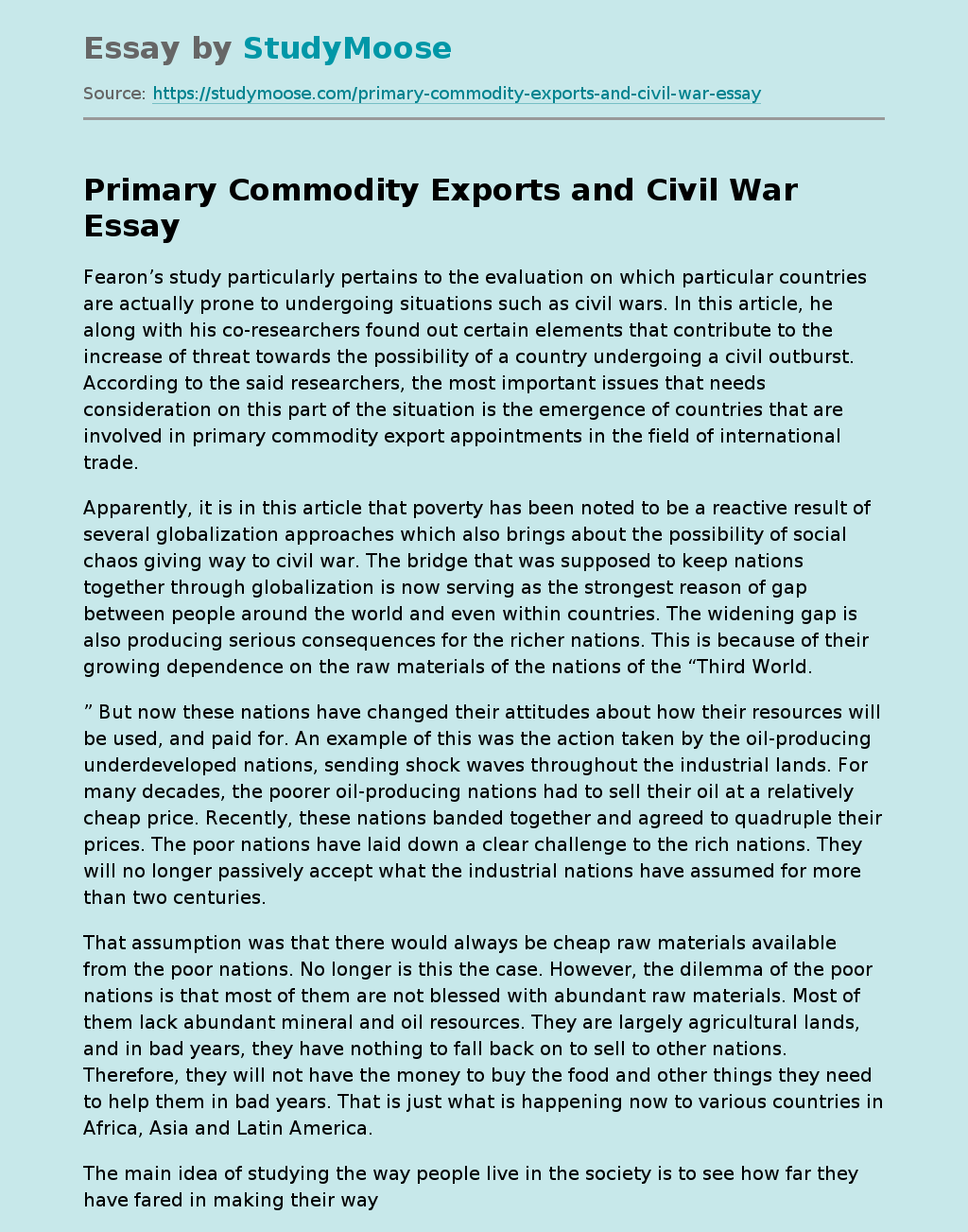