Primal Fear is a movie about a man who is being charged with murder. This man is Aaron Sampler and he is being accused of killing the priest. During this time a lawyer sees Samplers story on the news this man will be known as Martin Vail. Vail decides to represent Sampler for free and currently starts to speculate that he was innocent. As the case progressed Vail decided to do a phycological evaluation on Martin and sees very odd behavior.

Don't use plagiarized sources. Get your custom essay on
“ Primal Fear is a movie about a man who is being charged ”
Get custom paper
NEW! smart matching with writer

During this evaluation the person evaluating him began to pressure him about a girl he had a picture of. During this time Sampler began asking to stop and saying he was tired. As they continued to push him, he started to yell at them and get very aggressive. It is at this time when we are introduced to Roy, his other personality. Vail at this time is losing the court case and discovers a home tape made by the priest of pornography that included Sampler.

Vails team gets the other lawyers to show this in court and then make Sampler get on the stand. Vail then tries to get Roy to come up and then let the other lawyer pressure him enough. Roy, Samplers other personality then takes attacks the lawyer and the case is thrown out and he only must go to a mental institution for a month.

Aaron Sampler could be described as having the notorious devil and angel sides. Aaron was a shy and innocent like boy with a stutter, but Roy was a violent and evil man that wanted to protect Aaron almost like a father.

This is also the first symptom of having Dissociative Identity Disorder in the DSM-5 which states that having two or more personalities that when switched will have symptoms of disengagement from the first personality. It can also be describes as seeming to take a possession type form in some ways (2013).

During these times Sampler told Vail that it seemed like he was blacking out and then he would just wake up in a different spot. This is the second behavior that fits this category in the DSM-5 which is classified as gaps in the memory and having issues recalling important things (2013). He told Vail that he had blacked out during the time he was with the priest before he was found murdered. He blacked out during the attack in the court room also.

During the times when we see Roy, he is evil and extremely aggressive. This is also an aspect of the DSM-5 criteria that says that the other personality, Roy in this instance, exhibits behavior that is not culturally acceptable (2013). Murder is not acceptable in almost any culture. The way he attacks others is also another form of straying from a cultural norm. Roy’s behavior is a very useful example when comparing it to this aspect of the criteria.

One very important aspect to Dissociative Identity Disorder that the DSM-5 brings up is that none of the symptoms previously stated are caused by any substances or medical condition (2013). If Sampler was on any kind of drug that could impair him these symptoms could just be side effects. There are also medical conditions that cause you to black out or have an amnesia type response.

Sampler suffered much trauma in his life that led to the development of this disorder. He tells Vail in the beginning of the movie that he was physically abused as a child and at 18 years old he fled to Chicago and began begging in the streets. Currently is when he meets the Priest and begins his life as an alter boy for the church while in the church’s youth program. This is when he experiences another form of trauma that will be uncovered while in court.

While living in the churches program Sampler was forced into playing a role in a pornography video directed by the priest. This sexual trauma became very confusing for Sampler due to him viewing the priest as his savior. This trauma then became a recurring sexual abuse. He often compared the priest as loving him like a father and somebody he could never hurt. While Roy saw the priest as the evil man he was. Roy hated the priest and saw the truth of such abuse.

Dissociative Identity Disorder is said in the DSM-5 to be caused by having traumatic experiences, such as the physical abuse Sampler suffered, during childhood. While this disorder rarely presents many symptoms during childhood as a teenager it begins to show this disorders turbulence that is often written off as puberty. There are also things that can trigger dramatic changes and in this case that is the death of his abuser, that being the priest and his sexual abuse (2013). This could be a reason why Sampler is just now being diagnosed.

This movie is centered around the crime that Sampler is being accused of, which is murder in the first degree. The DA’s lay this crime out as Sampler, who is an altar boy, snuck into the priest’s library and then waited with a knife then proceeded to cut off the priest fingers, stabbed him multiple times, and carved B32.156 in his chest. He then proceeded to walk around with blood on his shoes and leave footprints. As he fled the scene he was saw by cops and chased until he was caught. He was then discovered to have the priest ring in his pocket.

Aaron explains this by saying that he was just returning a book to the priest library when he saw a shadow standing over the priest and then he blacked out. When he awoke, he had blood all over him and he heard sirens, so he ran because he was scared. Vails believes this story and fights to save Samplers life as he is facing the death penalty. Vail builds his case around a third party being in the room at that time.

As the case progresses Vail things that Sampler is lying to him due to the prosecution getting evidence he did not have. It is at this time when the neurological evaluation is done. This evaluation unearthed the disorder that he had struggled with, Dissociative Identity Disorder. Vail was unable to plead insanity due to already passing the maximum threshold to be informed.

Vail then gives the prosecution the video of the sexual abuse with a plan that they would use it in court. When used in court Vail knew that when Sampler was pushed that Roy came out. During Vails questioning of Sampler he tries to rile him up in hopes that the court could see Roy and know he did not kill the priest as Sampler. The DA falls right into plan and pushes Sampler on the stand till Roy comes out and puts one of the prosecutors in a chokehold until ultimately being torn off and stopping court. The judge then decides to throw the case out but allow for another trial, which is declined, and the case is sent to a bench trial, which is saying that he will not go to prison.

Primal Fear is a movie about a man who is being charged. (2019, Nov 23). Retrieved from https://studymoose.com/primal-fear-is-a-movie-about-a-man-who-is-being-charged-example-essay 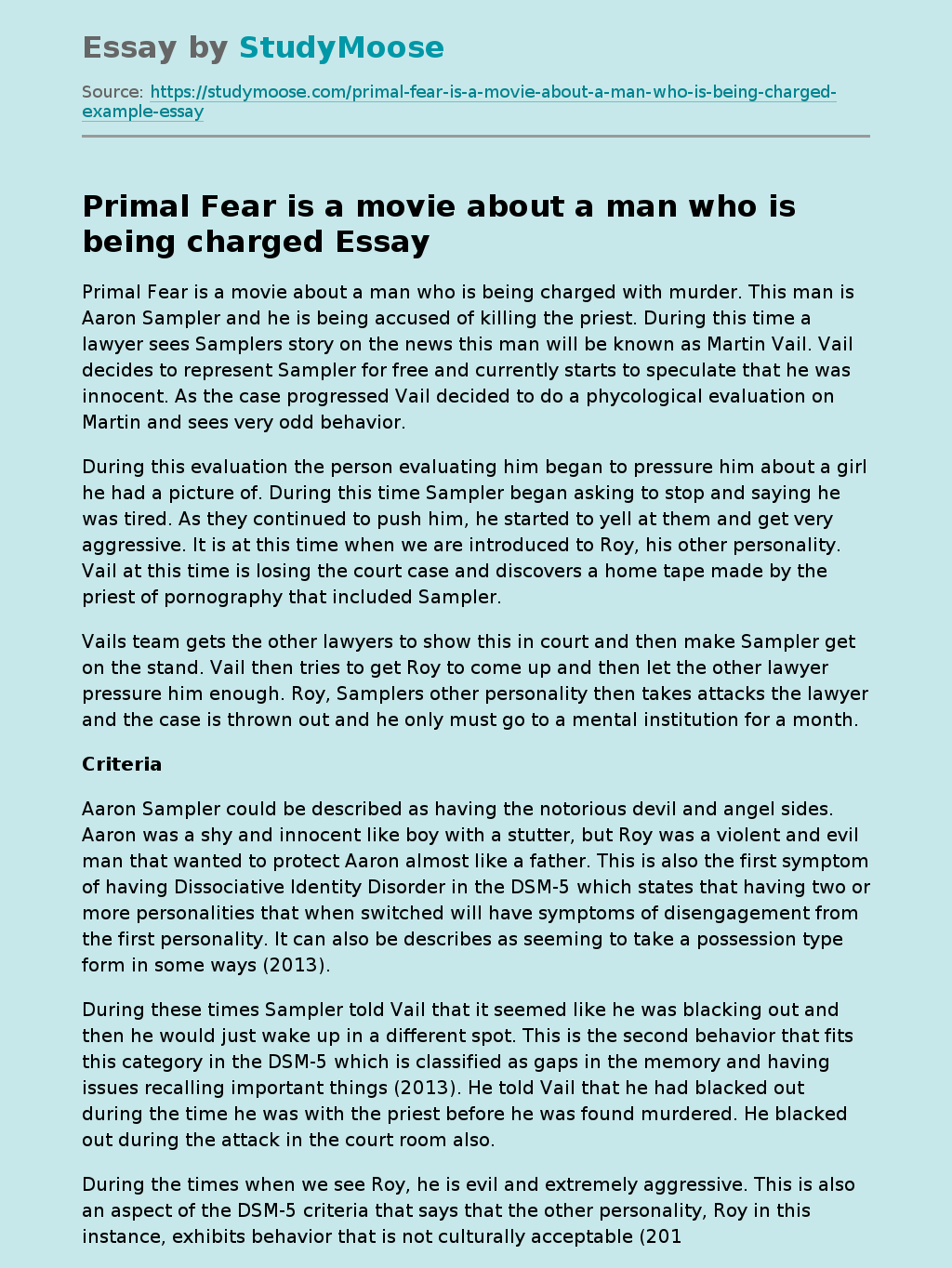