The passage focuses on the conversation between Elizabeth and Jane days after they received news about the departure of the Bingleys and Darcy. In this essay, I will explore the themes, the narrative techniques used and the tone of the involved characters. Austen’s dramatic form of writing is an attractive feature of Pride and Prejudice. The novel is ‘dialogic’ in nature; the dialogue between Jane and Elizabeth is a representation of their personalities and characters and Austen has purposefully juxtaposed Elizabeth opposite Jane to show the stark contrasts in their personalities, as well as their views and beliefs.

Turn in your highest-quality paper
Get a qualified writer to help you with
“ Pride and Prejudice Narrative Techniques ”
Get high-quality paper
NEW! AI matching with writers

Jane is protrayed as the good-natured and forgiving sister; despite being upset that Bingley had left her, she does not blame him but praises him as the ‘most amiable man’ and blames herself instead for her ‘error of fancy’. She thinks the best of others, Bingley in this case, that he is not ‘guarded and circumspect’ despite his wealth. Her love for Bingley is genuine as she sees the virtues in him but she accepts the fact that he may not love her, ‘I have nothing…nothing to reproach him with’.

The themes of love and class are raised here, as Jane’s words indicate her resignation and acceptance that her love for a man in an upper class is not reciprocated. This reflects how class boundaries and prejudices limit love and happiness during that time. This also indirectly reflects the social standing of women; they are expected to behave in a certain manner that does not undermine their reputation, as doing so otherwise would result in a poor reputation and possible ostracism, ‘I will not repine.

It cannot last long…we shall all be as we were before. ’

She defends her friend, Charlotte, as having true feelings for Mr. Collins, despite his ‘conceited’ and ‘pompous’ character; an indication of her maybe naive view that true love is simple and has nothing to do with practicality and materialism, ‘it is a most eligible match…she may feel something…for our cousin’. But what she does not admit openly, due to suspicions that Bingley may have left her due to her social inferiority, is that such ‘practical’ love does exist. Both sisters are aware of this, which is why both are reluctant to bring up Bingley’s name during the dialogue, ‘I have met with two instances lately; one I will not mention…’

Focalisation, a narrative technique is employed by Austen here, as the narrative voice deliberately omitted Bingley’s name and referred to him as ‘Netherfield and its master’. Although the opening paragraph is narrated from an omniscient third-person view, Elizabeth is the focaliser; this evokes reader empathy towards the sensitivity of Bingley’s departure. Elizabeth, however, is angry with both Bingley and Charlotte. She disagrees with Jane that Charlotte has feelings for Mr.

Collins as she feels that no one with ‘a proper way of thinking’ would marry such a man. She thinks that it is a betrayal to ‘principle and integrity’ that Jane suggested the possibility of true feelings from Charlotte to Mr. Collins and that Charlotte had betrayed love itself as her act of marrying Mr. Collins is not the ‘proper way of thinking’. Elizabeth feels that Charlotte married Mr. Collins for reasons other than love, maybe selfishly for status and wealth, ‘You shall not defend her…that selfishness is prudence…’

Deep in her heart, Elizabeth wishes to believe in Jane’s idealistic views on true love, ‘To oblige you, I would try to believe almost any thing…’; but reality has shown her that conventional love is influenced and restricted by class boundaries and practicality. This reflects how marriage was the vehicle of self-improvement and wealth acquisition for women during Elizabeth’s day (and thus Austen’s). Elizabeth views human behaviour as ‘inconsistent’ to their actual feelings and that appearance is not a good indicator of ‘merit or sense’.

It also serves as an irony of her own behaviour towards Darcy, as ‘inconsistent’ to her eventual feelings for him. Elizabeth’s views of love remains ‘prejudiced’ at this stage, a structured irony staged by Austen to serve as a milestone to chart Elizabeth’s maturity later in the novel. However, Elizabeth’s burst of ‘outrage’, ‘It is unaccountable! In every view it is unaccountable! ’, can also be read as displaced anxiety and anger as she is very uncertain of her own ability to escape a similar fate of being ‘dumped’ like Jane due to possible social inferiority or having to marry for practical considerations like Charlotte.

This is not openly mentioned by Elizabeth in the passage but when she subtly mentioned that, ‘And men take care that they should’, it could be interpreted that she wished to meet a man who would admire her for the correct reasons. Jane’s words, ‘It is very often nothing but our own vanity that deceives us’ foreshadows the maturity in Elizabeth; she is at the moment ‘prejudiced’ against Darcy when she had a poor first impression of him and thus unable to recognize his virtues.

Later in the novel, Elizabeth would slowly let go of her ‘vanity’ – her misplaced ‘pride’ and ‘prejudice’ to realise a tender and mutual love between herself and Darcy. In conclusion, Austen’s ‘dialogic’ prose gives personalities to both Jane and Elizabeth, revealing the conscious and unconscious natures of the sisters, as well as their ‘hidden impulses and repressed longings. ’ (Walder, 1995, p54) (884 words) References Austen, J. Pride and Prejudice. ed. by J. Kinsley, Oxford World’s Classics. Oxford: Oxford University Press, 2008. D. Walder, eds. The Realist Novel. London: Routledge in association with the Open University, 1995. 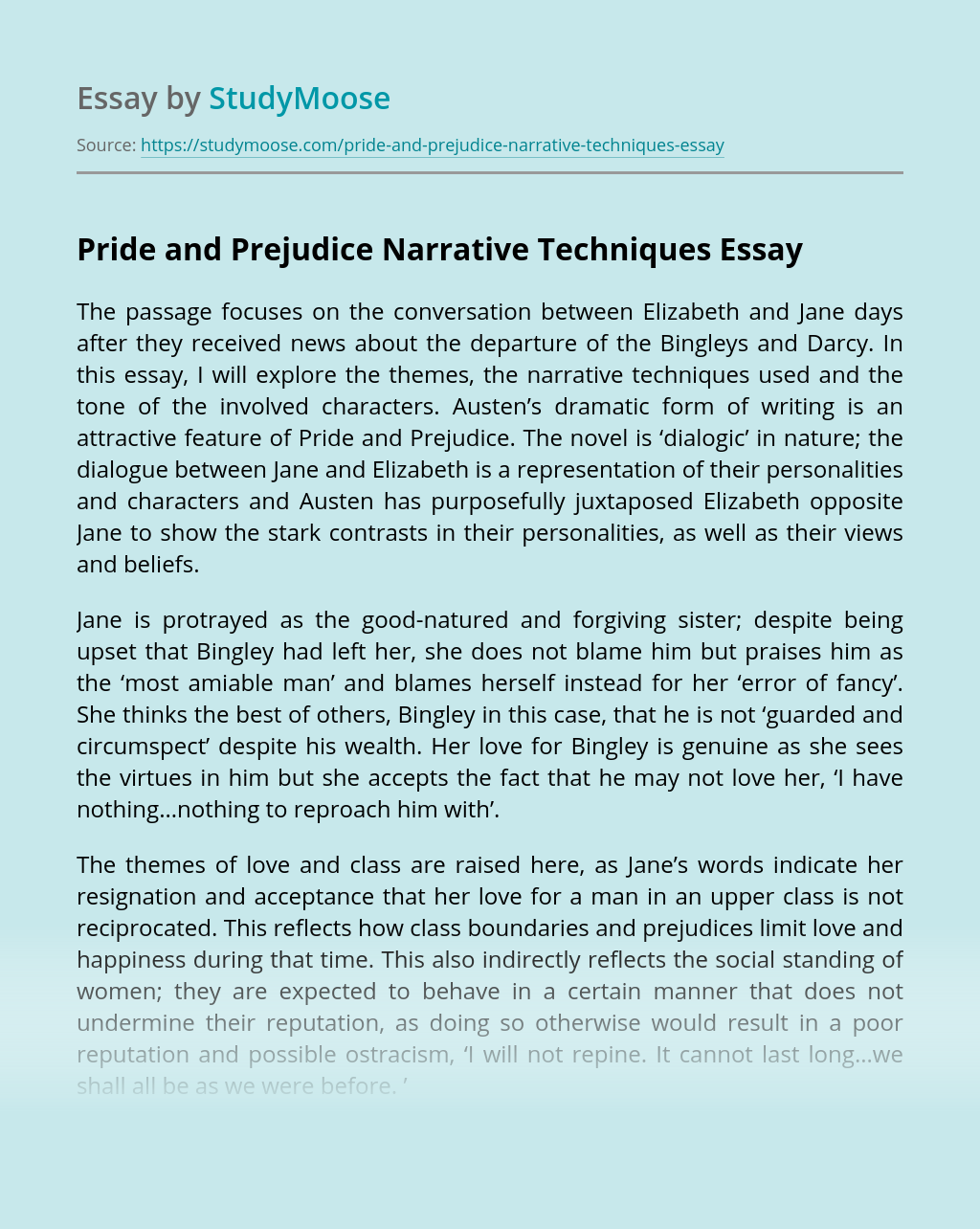 Turn in your highest-quality paper
Get a qualified writer to help you with
“ Pride and Prejudice Narrative Techniques ”
Get high-quality paper
Helping students since 2015
Stay Safe, Stay Original