Pride and Prejudice and the Relationships of Women and Men

In the book Pride and Prejudice by Jane Austen there are many relationships between men and women. This book was originally entitled First Impressions and when reading it is easy to understand how this title could be aptly appropriate to the story line and characters. In these relationships one of the things that can be noted is that men are primarily looking for sex and that women are looking for resources. There are several character relationships in the story that exemplify this theory.

Don't use plagiarized sources. Get your custom essay on
“ Pride and Prejudice and the Relationships of Women and Men ”
Get custom paper
NEW! smart matching with writer

These relationships include the relationship between Charlotte and Mr. Collins, Elizabeth and Mr. Darcy, and Mr. and Mrs. Bennet.

There are many cases where it is obvious that Charlotte wants to be married and that she is trying to fulfill her mother’s dream of her being married off.

Also Charlotte seems to ravish in the idea that someone else could take care of her. As for Mr. Collins, there is much detail linked to his attraction to Charlotte and being attracted to her could promote a stronger desire in him to fulfill his sexual desires with her.

Also prior to Mr. Collins being with Charlotte, Mr. Collins was more interested in Elizabeth who continuously denied him and didn’t want to be with him. This further promotes that Mr. Collins did not show that he was truly in love with Charlotte in the story (Austen 211).

There were many other key points that were involved in the relationship between Mr. Collins and Charlotte. This relationship between Charlotte and Mr. Collins did cause some problems for Charlotte as her sister was disappointed in her in that she felt that Charlotte should hold out for true love and really find someone who was smitten with her where as Charlotte seemed ready to settle in a desperate attempt to be married and no longer have to worry about whether or not she was going to have to take care of herself.

Charlotte seemed to be comforted by the fact that someone was offering to really take care of her and focus their energies on her well being. In this fact it seems as though Charlotte was truly willing to settle for anything when it came to being taken care of and Mr. Collins was happy settling for Charlotte whom he found attractive and yet he was also able to encourage a relationship where he would be able to have passion in his own eyes. This relationship personifies the trend of the times that was when someone married for economic reasons rather than marrying for love (“Pride and Prejudice” 3).

In the relationship of Elizabeth and Mr. Darcy there are many different factors affecting how things. In the beginning it seems as though Elizabeth can not stand Mr. Darcy, “as if intending to exasperate herself as much as possible against Mr. Dacry. ” There were many other statements in the novel which would lead one to believe that Elizabeth indeed can not stand Mr. Darcy. There are also statements in the novel to support that Mr. Darcy feels likewise and the same and that he too has no intentions of having a relationship with Elizabeth.

“Mr. Darcy, who was leaning against the mantle-piece with his eyes fixed on her face, seemed to catch her words with no less resentment than surprise. His complexion became pale with anger, and the disturbance of his mind was visible in every feature. ” The problems between Elizabeth and Mr. Darcy seemed to be that they both were head strong and had big personalities in which they were not interested in being able to engage in a relationship together (Austen 313 and 314). Later through the novel the relationship between Elizabeth and Mr.

Darcy develops and eventually, the second time that he proposes, they decide to be married. In this sense it seems as though Elizabeth holds out on marrying him until she believes that he is willing to initiate a relationship with her and he is willing to respect her for her thoughts and beliefs and not simply that he is attracted to her or wanting to be with her in a relationship. Another key factor in this relationship is that Elizabeth finds Mr. Darcy to be attractive, even when she is unhappy with who she thinks he is as a person, she still thinks that he is good looking.

There are also a lot of issues in this sense as Elizabeth talks a lot throughout the first chapters about her opinions of others and she does not truly give others a chance to develop as she bases most of her long term impressions on others on the first impression which they make. Overall this relationship personifies a successful relationship between a man and a woman under the pretense that there has to be a long term connection and something more than initial attraction in order to have a successful relationship and marriage (“Pride and Prejudice” 1).

In the relationship of Mr. and Mrs. Bennet it is obvious that Mrs. Bennet is consumed with the financial ability of men to take care of women. She is obsessed with her daughters being able to marry a “fine suitor” who will be able to provide for them and she is even talking about the amount of money one young man makes with her husband as the story opens. Mr. Bennet seems to be concerned about his wife’s beauty which would prove that he has a need and a desire to find her attractive.

Mrs. Bennet’s only concerns for her daughters are that they be married off to wealthy men who can provide the best of life for them however she has poor public manners and many times her daughters are embarrassed by her. Also Mrs. Bennet’s actions really do keep some of the most suitable suitors away from her daughters as her actions are rather appalling to others and therefore they are typically wanting less to do with her daughters in fear of having to deal with her.

In many parts of the novel, Mr. Bennet comments on his appreciation for Mrs. Bennet’s beauty, in doing so he is portraying that he is truly attracted to her and therefore he would be interested in the sexual relationships that would be available to him with his wife (Austen 213). This relationship between Mr. and Mrs. Bennet personifies the relationship that can occur when someone focuses on attraction first. This being that Mr. Bennet fell in love with how Mrs. Bennet looked without knowing what her intelligence was or whether or not they would get along. Mr.

Bennet. In these relationships the women are looking for various securities whether financial, emotional or both and the men seem to be looking for the sexual benefits that will come from the relationships. These types of relationship trends are interested in Bibliography Austen, Jane. The Complete Novels. New York: Penguin Group, 2006. LeFraye, Deidre. Jane Austen: The world of Her Novels. New York: Harry N. Abrams, 2002. “Pride and Prejudice. ” The Literature Network. 2000. <http://www. online- literature. com/austen/prideprejudice/>

Pride and Prejudice and the Relationships of Women and Men. (2016, Nov 05). Retrieved from https://studymoose.com/pride-and-prejudice-and-the-relationships-of-women-and-men-essay 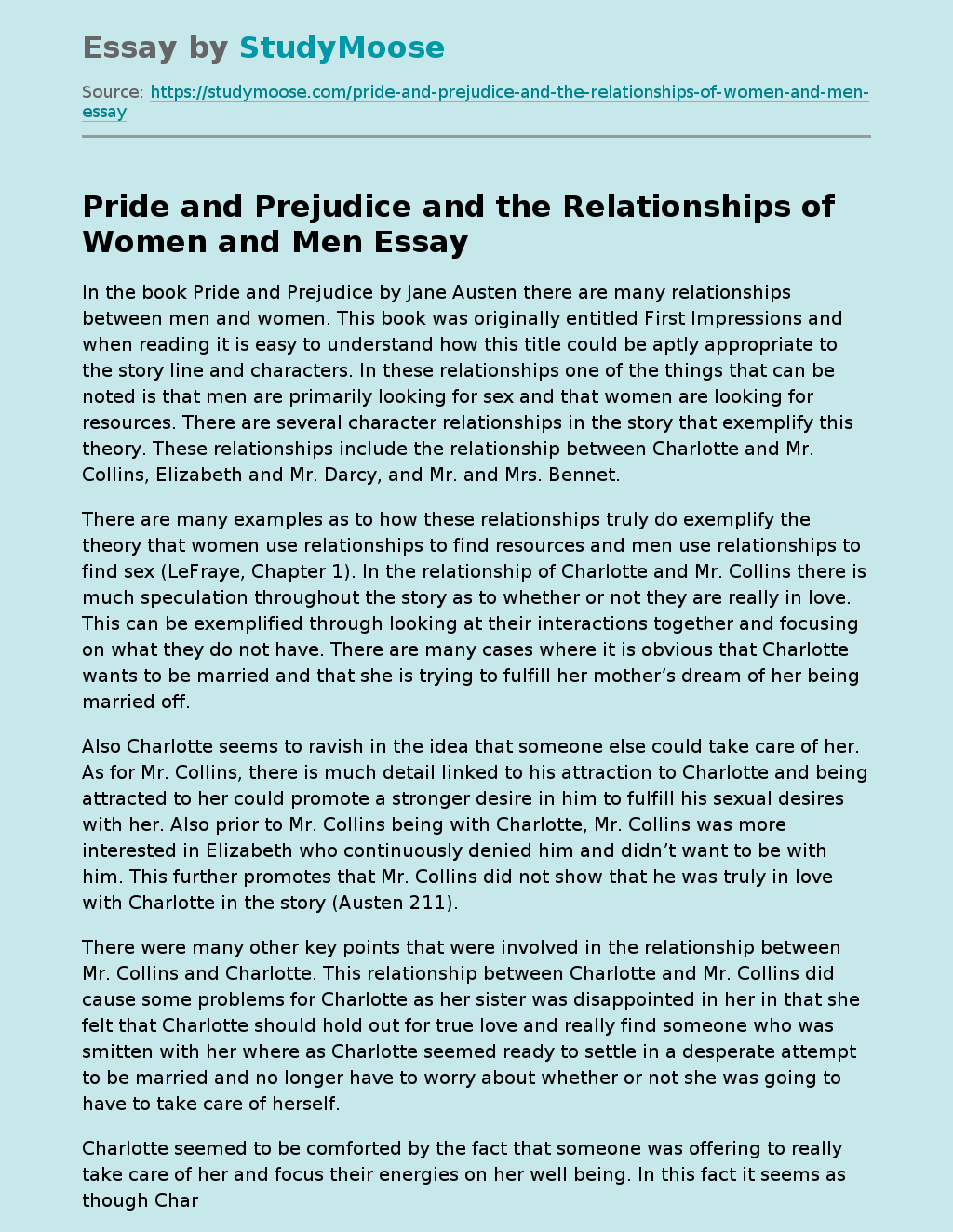