Preventing bullying in schools: A guide for teachers and other professionals

The issues associated with bullying and violence in school is seen to be rampant even in the community. These issues are related to threats, physical aggression, and harassment and teasing. However, it is important to note that the behavior should not be accepted as it is an anti-social behavior which destabilizes the quality of school environment. At the same time, it is responsible for interfering with the academic performance of the student and social interaction. There are those students that will find themselves suffering from physical and emotional trauma which may lead to extreme cases of violence (Rigby & Australian Council for Educational Research, 2010).

Turn in your highest-quality paper
Get a qualified writer to help you with
“ Preventing bullying in schools: A guide for teachers and other professionals ”
Get high-quality paper
NEW! AI matching with writer

Proficient in: Bullying In Schools

One of the most fundamental things is to understand the reason as to why majority of the adolescent children become bullies. The term bully is used to ascertain and explain an individual who engages himself in verbal, physical or psychological harassment or aggression towards others. The main reason for them to engage in such behaviors has always been to gain dominance and power over the other individuals (Lee, 2004). Three main issues usually point out to the reason as to why the children might pick up the bullying traits.

The first issue is associated with family factors whereby the children might not receive the required supervision from the parents. Children who witness the act of bullying by their parents or siblings have the highest chances of being bullies themselves as they grow up. The children who have negative concepts and perceptions in life are explained to receive the same at home, which is sometimes accompanied by physical punishments (Rigby, 2007). They always live in fear and will find themselves attacking others before they are attacked as a form of protection. As they are bullying the others, they feel comfortable, as it is the only way they can experience importance and power. The second issue is associated with school factor whereby the trait is reinforced as the children intimidate their counterparts (Rigby & Australian Council for Educational Research, 2010). The students that receive negative feedback all the time as compared to other students are vulnerable to become bullies in order to be recognized. The final nature is through peer group factors. Students who are in schools or neighborhoods that advocate bullying will find themselves engaging in these behaviors. They will engage in bullying with the aim to fit in even if they are uncomfortable with the entire behavior.

In addition, bullying is seen top be the leading influencer of violence amongst students. Bullies do not have respects for the fundamental human rights and will always resort to violence with the aim or resolving their issues. The retaliation by the victim might lead to fighting and in some cases gang shootings in schools as reports in the past have shown (Lee, 2004). Frustration from both the victim and the bully might lead to vengeful acts of violence.

What Schools Can Do

Different schools have reactive measures, which help them in curbing bullying and violence in schools. Some measures such as having surveillance cameras, metal detectors and police officers have not been effective as it was expected. Schools have zero tolerance to acts of bullying and violence in schools. The measures sometimes lead to expulsion and suspensions. However, this has been seen to have a negative impact to the life of the victim, as they would end up being victims of violent vengeful attack by the punished student (Lee, 2004). Nonetheless, schools are expected to come up with programs that would prevent bullying and violence in schools at the same time promoting a positive environment for the victims and the bullies. The programs are expected to have participations from parents, students, members of the community and educators.

The first aspect deals with providing early intervention. This would mean that the bullies should be intervened while they are in early stages of education such preschool, middle school or in elementary. Schools, groups and the community are expected to advocate for training the students in social skills (Rigby & Australian Council for Educational Research, 2010). This will work if it is applied together with systematic aggression intervention and counseling for students seen to exhibit bullying behaviors. The program is expected to be spear headed by trained mental health personnel and school psychologists who will be responsible for evaluating and selecting the best programs.

The schools are also expected to balance between behavioral with discipline support in their system. Clear understanding of the consequences of bullying and violence should be made standard for all the students. The school is expected to impose interventions that are related to positive behaviors, which will be responsible to change the behavior of the students instead of having programs, which are based on solely punishments (Rigby, 2007). The school is also expected to support the efforts of the parents in teaching the children the expected social skills. Parents are expected to reinforce positive behaviors, which are related to good interpersonal interactions. This can be done through social workers, school psychologists and counselors who will intervene whenever a student is a victim or starts exhibit bullying behaviors.

The schools are also expected to equip their staff members and teachers with intervention and prevention skills. The teachers are to be trained identifying and responding to damages which might have resulted from victimization. They are to offer positive modeling and feedback which would foster better social interaction. The schools are also responsible for changing the attitude that is presents in bullying. This will enable the students to empower each other. For instance, there is a trend in schools whereby the other students become bystanders and watch as the weak students are being bullied. It is important for schools to teach them to stand for each other and work together to stand against bullies (Lee, 2004). The concept will make the students feel safe whenever they are with their fellow students.

What Parents Can Do

When it is a question of bullies, the parents are expected to play a crucial part in ensuring their children do not become bullies. They are expected to always notice their children’s attitude and behaviors. This can be in both victims and bullies. For instance, victims of bullying usually exhibit some behaviors that should signal the parents that there is something wrong. The child might sometimes become withdrawn or reluctant when it’s time to go to school which is normally accompanied by stomachache, headache and sleeping problems. The parents should also notify the school’s administration whenever they notice that their child is a victim of bullying. The parents are also expected to teach their children on strategies of countering bullies. The strategies might range from standing up for themselves and confronting the bully with words which might not lead to violence (Rigby & Australian Council for Educational Research, 2010). Children are also required to posses’ good social skills whenever they are young. This is the work of the parents to ensure that they do not have bullying traits whenever they are young as it starts as early as two years.

It is important that both parents are teachers develop good social skills for the children. Bullying traits start from home and will be exhibited in schools. Therefore, there should be strategies and programs set by both parents and teachers. It is essential that adults construct an environment both in school and in homes that will not be conducive for any act of bullying. It is not inevitable that all the children that are growing will have to bully their counterparts. This is a trait that is normally influenced by the people surrounding the student at home, school, peer groups and the content of the media. Nevertheless, the trait can be prevented or untrained by the individual concerned. The main concept is to make the students understand how to treat each other rather than victimizing them through threats and cruelty. The reason as to why this paper takes a firm stand on acts of bullying is due to the fact that the life of the victim is interfered with sometimes permanently.

Lee, C. (2004). Preventing bullying in schools: A guide for teachers and other professionals. London: Paul Chapman.

Rigby, K., & Australian Council for Educational Research. (2010). Bullying interventions in schools: Six basic approaches. Camberwell, Vic: ACER Press. Indicate that Bullies do not have respects for the fundamental human rights and will always resort to violence with the aim or resolving their issues. The retaliation by the victim might lead to fighting and in some cases gang shootings in schools as reports in the past have shown.

Lee, C. (2004). Preventing bullying in schools: A guide for teachers and other professionals. London: Paul Chapman.

Rigby, K. (2007). Bullying in schools and what to do about it. Camberwell, Vic: ACER. Imply that the school is expected to impose interventions that are related to positive behaviors, which will be responsible to change the behavior of the students instead of having programs, which are based on solely punishments.

Preventing bullying in schools: A guide for teachers and other professionals. (2015, Sep 01). Retrieved from https://studymoose.com/preventing-bullying-in-schools-a-guide-for-teachers-and-other-professionals-essay 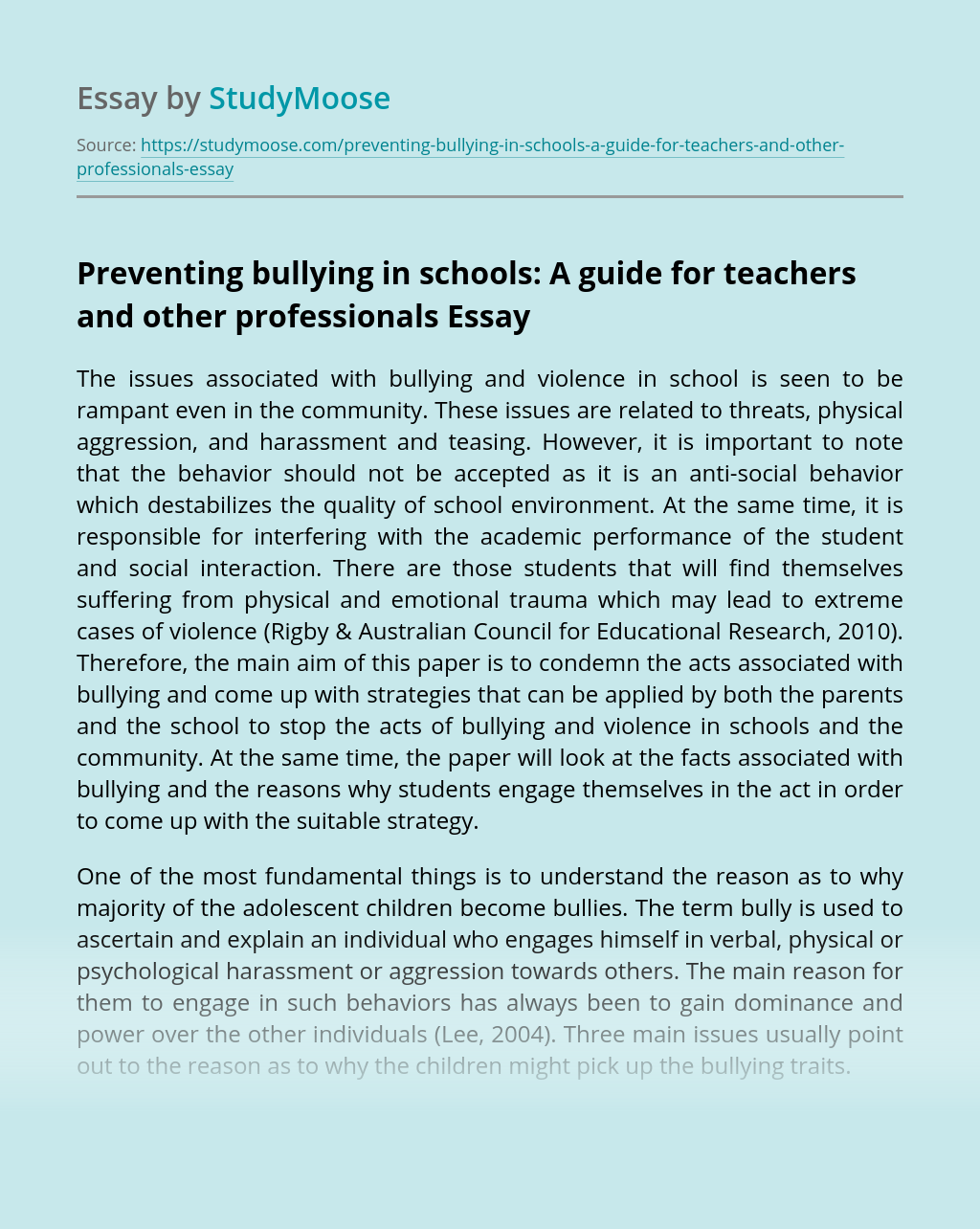 Turn in your highest-quality paper
Get a qualified writer to help you with
“ Preventing bullying in schools: A guide for teachers and other professionals ”
Get high-quality paper
Helping students since 2015
Stay Safe, Stay Original