PREVALENCE OF CERVICAL CANCER IN KENYA Thesis Statement: Cervical Cancer is the second most common form of cancer in women in the world after breast cancer. IntroductionCervical cancer is a type of cancer that forms in the tissues of the cervix. It is usually a slow-growing cancer that is asymptomatic and can only be detected through screening tests. Cervical cancer is mostly caused by HPV infection, with 99% of cervical tumours having HPV detection. (Marth , et al., 2017)In developed countries the burden of cervical cancer is quite low, the situation however constitutes a major health problem in developing countries.

Don't use plagiarized sources. Get your custom essay on
“ PREVALENCE OF CERVICAL CANCER IN KENYA Thesis Statement Cervical Cancer is the ”
Get custom paper
NEW! smart matching with writer

Every year more than 270 000 women die from cervical cancer, more than 85% of these deaths are in low- and middle-income countries, because of poor access to screening and treatment services, the vast majority of deaths occur in women living in low- and middle-income countries. Sub-Sahara Africa records the highest incidence of cervical cancer and high mortality affecting women in the world. East Africa is the highest recorded a 42.

7 % of cases of cervical cancer. Sub-Sahara Africa unfortunately has no screening programs for early precancerous lesions detection in most countries. Screening activities in the region are done as pilot or research projects which on completion are discontinued. Since 2001, South Africa is the only country with a national cytology-based screening program although coverage remains poor and the impact on invasive cervical cancer is unknown.Implementation of cervical cancer prevention and control programmes contributes to the attainment of the Millennium Development Goals through universal access to sexual and reproductive health services to improve women’s health, to the 2010 UN Secretary-General’s Global Strategy for Women and Children’s Health and to the 2011 Political Declaration of the UN General Assembly High Level Meeting on Noncommunicable Diseases.

PREVALENCE OF CERVICAL CANCER IN KENYA Thesis Statement Cervical Cancer is the. (2019, Aug 20). Retrieved from https://studymoose.com/prevalence-of-cervical-cancer-in-kenya-thesis-statement-cervical-cancer-is-the-essay 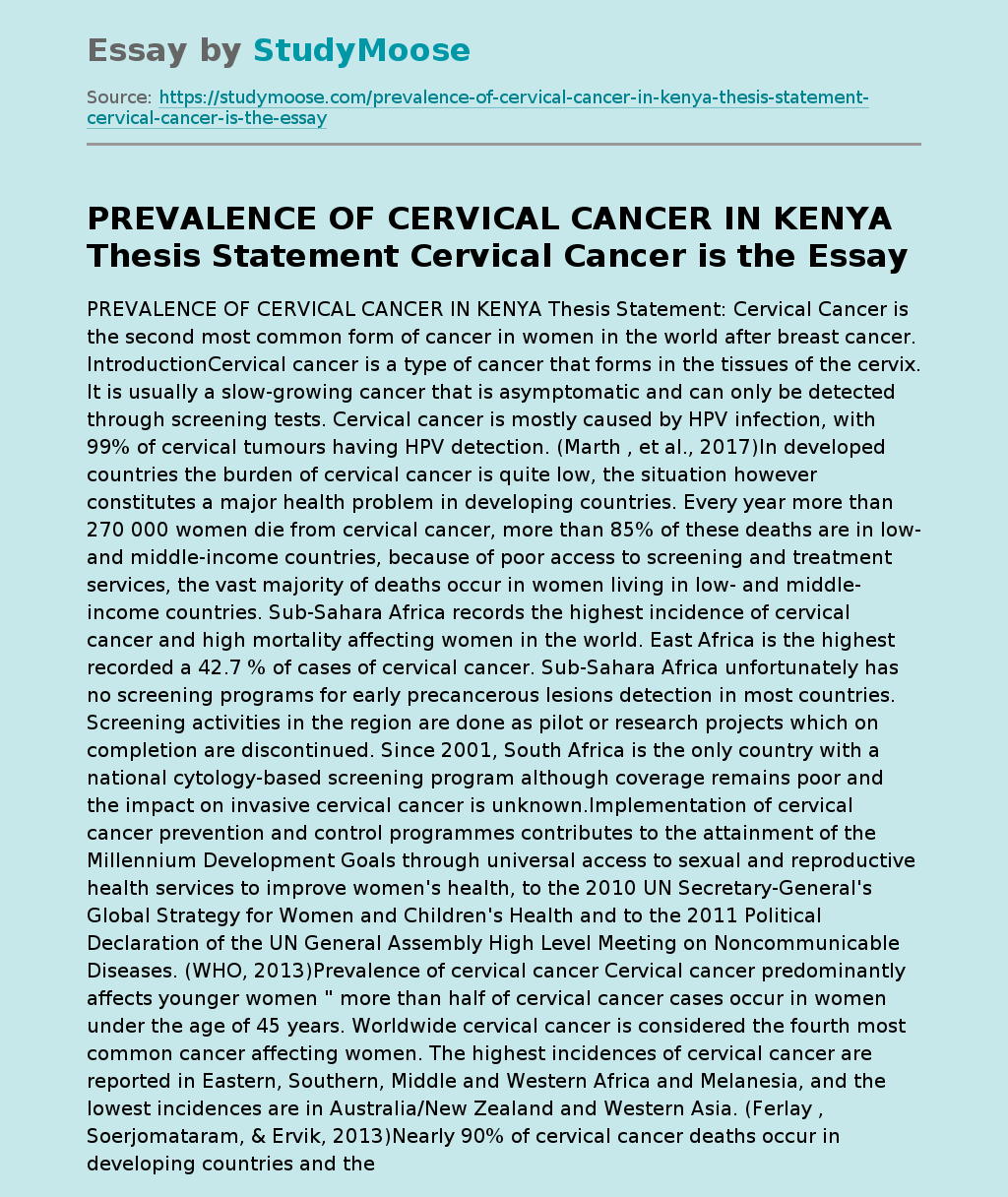