Freud believes that it is part of everyone’s personality to seek pleasure through violence; it is part of the “ID.” However, the ego negotiates between the ID and superego, meaning the majority of people can regulate between the morals of society and their own pleasures. I agree with this, as does Sara Shepard, the author of “Pretty Little Liars.” I believe that people who seek pleasure through violence are ill minded, and have psychological issues, due to the fact that the ego should be able to tell the brain to follow the morals of society.

Don't use plagiarized sources. Get your custom essay on
“ “Pretty Little Liars” by Sara Shepard ”
Get custom paper
NEW! smart matching with writer

‘A,’ a character from Pretty Little Liars, nobody can solve the mystery regarding who exactly ‘A’ is, however they are ill-minded, and seek pleasure in harming others as a joke. Ill-minded people like this are evil.

Most people follow the morals of society, but still enjoy violence. How the person goes about enjoying it is what differs them from everyone else. For example, an individual could can enjoy watching crime shows, such as CSI, Criminal Minds, Law and Order and many others.

Even though they enjoy these shows it does not mean that they would go out and seek to hurt someone the way the criminals do to their victims in the show. In “Pretty Little Liars,” Aria, Hannah, Emily, and Spencer are all good people. They do not go seeking violence, they do not seek harm. This is the way most people in society are. These ‘good people’ have a good ego. Meaning it is negotiating their wants to work with the morals of society.

A very select few are ill-minded wishing only harm upon others. ‘A’ from “Pretty Little Liars” is one of these select few. She or he makes it their goal to ruin the lives of Aria, Hannah, Emily and Spencer. For example, Aria gains an interest in a man during the summer; little did she know he was her new English teacher. They keep it a secret between only them; they were not going to let that tare their new love for each other apart. However, ‘A,’ knows everything. They know how Aria’s dad (a teacher) had an affair on his wife years ago. Due to the fact that Aria is keeping her relationship a secret she receives a text message, signed A, saying, “Aria,

Maybe he fools with students all the time.
A lot of teachers do……. Just ask your dad! –A” (Shepard, page 139). This quote shows how A knows everything. They know the girls’ past, and use it against them. ‘A’ is a murderer, they killed Allison during the beginning of the novel, and Ian during the end. ‘A’ did not intend to kill Ian but meant to kill Spencer. The girls have no understanding as to why they are ‘A’s’ targets. They are good people, not intending any harm. This is not a normal person. Innocent people are killed every day because people are sick. They seek pleasure in watching the suffering of an innocent individual. It is not normal or moral, for people to be this evil.

I can speak on a personal level. I do not seek pleasure through violence, I do enjoy crime shows, but does that make me a bad person? No. Although someone has enjoyed taking their pleasure out on me by violence, and those that do that to an innocent person are evil. I do not think that the people that look for pleasure in violence truly understand how they affect a person. I can relate to the girls in Pretty Little Liars because they seek help, sometimes people will try and help you, other times it’s a hard concept for many to believe.

Emily, Aria, Hannah and Spencer cannot trust anybody the same because of the horror and threats they are encountering that affect their daily lives. Just as I cannot do a lot of things that I use to do prior to my incident. Nothing is the same. People that seek violence do not realize what they are actually doing to other people because they only seek self-pleasure, they are ill-minded.

There is always going to be a psychological battle between the ID and superego, however the ego’s ability to negotiate between the two is what will make or break an individual. There are many ill-minded people in our world, there is help. ‘A’ is an evil person, just like many in our world seeking pleasure in selfish ways because they don’t know any different. Their effects on people could be unfortunate. Not everyone is made evil, it’s a psychological illness. There is good in this world. 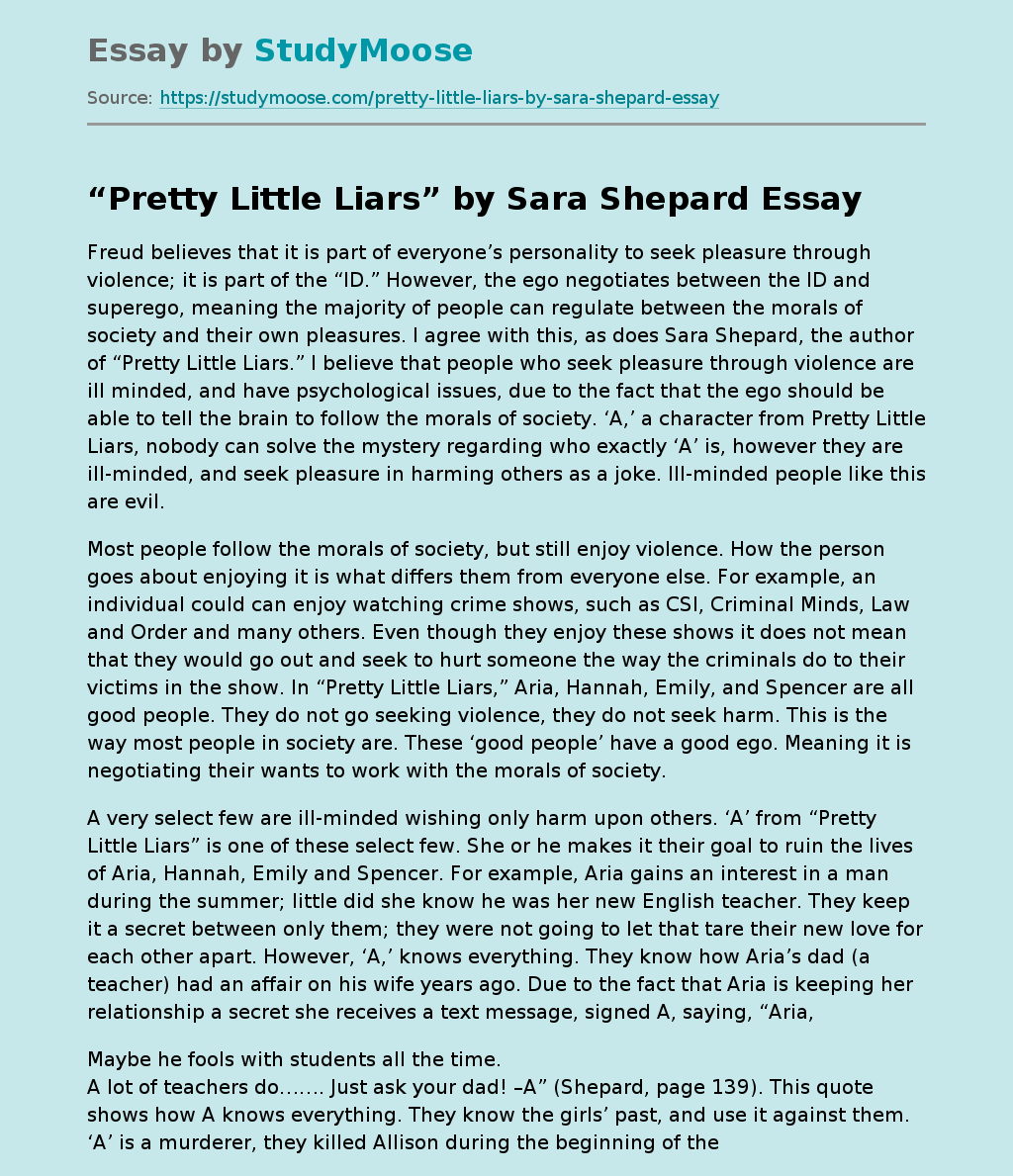