Prejudice in the Merchant of Venice

Prejudice is a significant theme in The Merchant of Venice. This is expresses at various occasions throughout the novel. One of the most significant examples of prejudice in this novel is the Anti-Semitic views of the Christian citizens in Venice. A second act of prejudice in The Merchant of Venice occurs when the Prince of Morocco arrives in Venice. The third example, though more subtle, is the prejudice towards the Prince of Arragon. These three examples fall in to two major categories, racial prejudice and religious prejudice.

Turn in your highest-quality paper
Get a qualified writer to help you with
“ Prejudice in the Merchant of Venice ”
Get high-quality paper
NEW! AI matching with writer

The Anti-Semitic views in The Merchant of Venice play an important part in the novel. Without the Anti-Semitic views, the elopement plot and the bond plot would not be in existence. If Jessica were Christian, Shylock would have embraced the marriage of Lorenzo and Jessica. Religion, however, intervenes and causes Shylock’s anger at his daughter. The bond plot simply is based on religious tension. Shylock the Jew would not have been so hostile towards Antonio and Bassanio had they all been Jewish or Christian.

The behavior in the court room also made a heavy contribution to the Anti-Semitism in The Merchant of Venice .The punishments for Jews were far worse than those given to Christians. Jews had seriously harsh restrictions allowing them to only be money-lenders.

The second example of prejudice occurs between Portia and the Prince of Morocco. This prejudice, however, is not religious like the prejudice between Shylock and Antonio, but is more of a form of racial prejudice. As the second act begins, Morocco states, “Mislike me not for my complexion, the shadowed livery of the burnished sun.

” (2.1.1-2). This was said to Portia to ask her not to judge the prince on his complexion, but rather that he be judged on what is inside of him. Portia, however, had decided that she would not enjoy marrying the prince. She expresses her prejudice by saying,

“If I could bid the fifth welcome with so good heart as I can bid the other four farewell, I should be glad of his approach. If he have the condition of a saint and the complexion of a devil, I had rather heshrive me than wive me.” (Shakespeare 127-131)

Her decision was clearly made and despite the Prince’s efforts to help her understand that he was just like any man she remained adamant about her agreement.

The third example of prejudice, also racial, is towards the Prince of Arragon. The Prince of Arragon is mocked in various manners throughout the scene in which he chooses the casket. The Prince’s name added a form of comedy to the story. His name, Arragon, similar to Arragon, told the reader about his attitude and personality in general. The Prince of Arragon also stated, “What’s here? The portrait of a blinking idiot presenting me a schedule!” (2.9.58-60). This statement is also insulting towards the prince due to the fact that he can’t even recognize his own self. Secondly, he referred to the image in the mirror as a blinking idiot. The prejudice here is given my Shakespeare and added instead of being given on from another character, it is expressed as a trait of the Prince of Arragon himself. Shakespeare, in this case, shows prejudice, not a character.

Prejudice in the Merchant of Venice. (2016, Jun 28). Retrieved from https://studymoose.com/prejudice-in-the-merchant-of-venice-essay 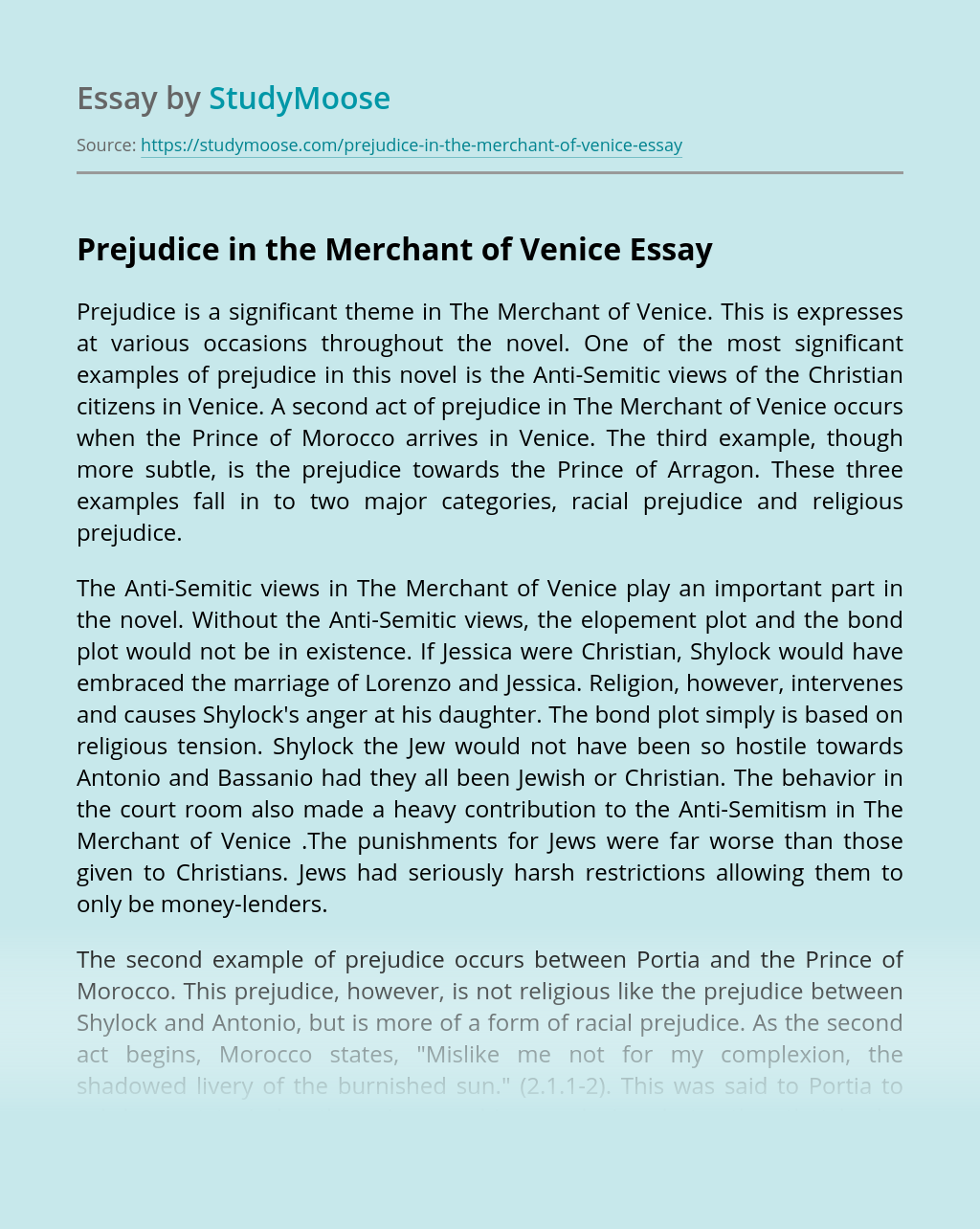 Turn in your highest-quality paper
Get a qualified writer to help you with
“ Prejudice in the Merchant of Venice ”
Get high-quality paper
Helping students since 2015
Stay Safe, Stay Original