Prejudice and Discrimination in Philadelphia

Philadelphia is a movie which demonstrates not only the cold-blooded and hypocritical members of corporate society, but the indignities and prejudices that people living with AIDS have to go through. This movie was set in an era when homosexuality was not socially accepted and not many people were educated on the disease AIDS. Andrew Beckett, a Philadelphia lawyer who has been keeping his homosexuality, and his AIDS, hidden from his conservative bosses. He is a good worker and is respected in the workplace until one day he’s suddenly and inexplicably fired.

Andrew suspects AIDS is the reason, and is determined to fight in court, even as he is losing his other battle, against the disease. Beckett hires attorney Joe Miller to represent him. Joe Miller is a homophobe and has to first overcome these fears of gays. Andrew Beckett’s ex Boss, Charles Wheeler, a sickening, prejudice man who resembles the most disgusting corporate boss there is: The corporate boss, who pretends to be friends with his coworkers or clients, only to stab them in the back later.

He will do only anything to benefit himself and get to the top of the business.

At the beginning, Wheeler pretends to be Andy’s friend, heck he even asks him for legal advice on a special antitrust case called ”Highlight vs. Sander Systems”. Andy Beckett’s becomes fired, from the job, once they find out he has aids, but try to make it look he was fired for other reasons. The movie also greatly shows the prejudices, and misconception people have about aids.

Another scene that shows people ignorance and prejudice towards AIDS and homosexuals is the library scene in which Andrew Beckett is conducting research for his AIDS case against the law firm that illegally fired him.

The librarian first asks Andy Beckett, if he would be more comfortable in a study room, but then it becomes evident that the ignorant librarian is telling not asking Andy Beckett to go to another room because she is uneducated on the disease and fears she might catch it. Andrew being, a very proud man, refuses showing his true dignity even while having AIDS. At the time Andrew Beckett’s lawyer Joe Miller was there and saw this happening, although he was hiding behind a pile of books.

He realised Andrew needed him to help protect his rights. The lawyer took the book Andy was holding out of his hand to show the librarian he was not afraid getting the disease by touching something Andrew had touched. During the court case, Joe Miller brings up the point of homosexuality against Andrew’s old company in defence, he brings up the points of how society don’t accept AIDS and homosexuals. In the end Andrew and Joe win the case and get money in damages, although Andrew is dying, he is happy to see that they won the case and raised awareness of AIDS.

Prejudice and Discrimination in Philadelphia. (2017, Jan 19). Retrieved from http://studymoose.com/prejudice-and-discrimination-in-philadelphia-essay 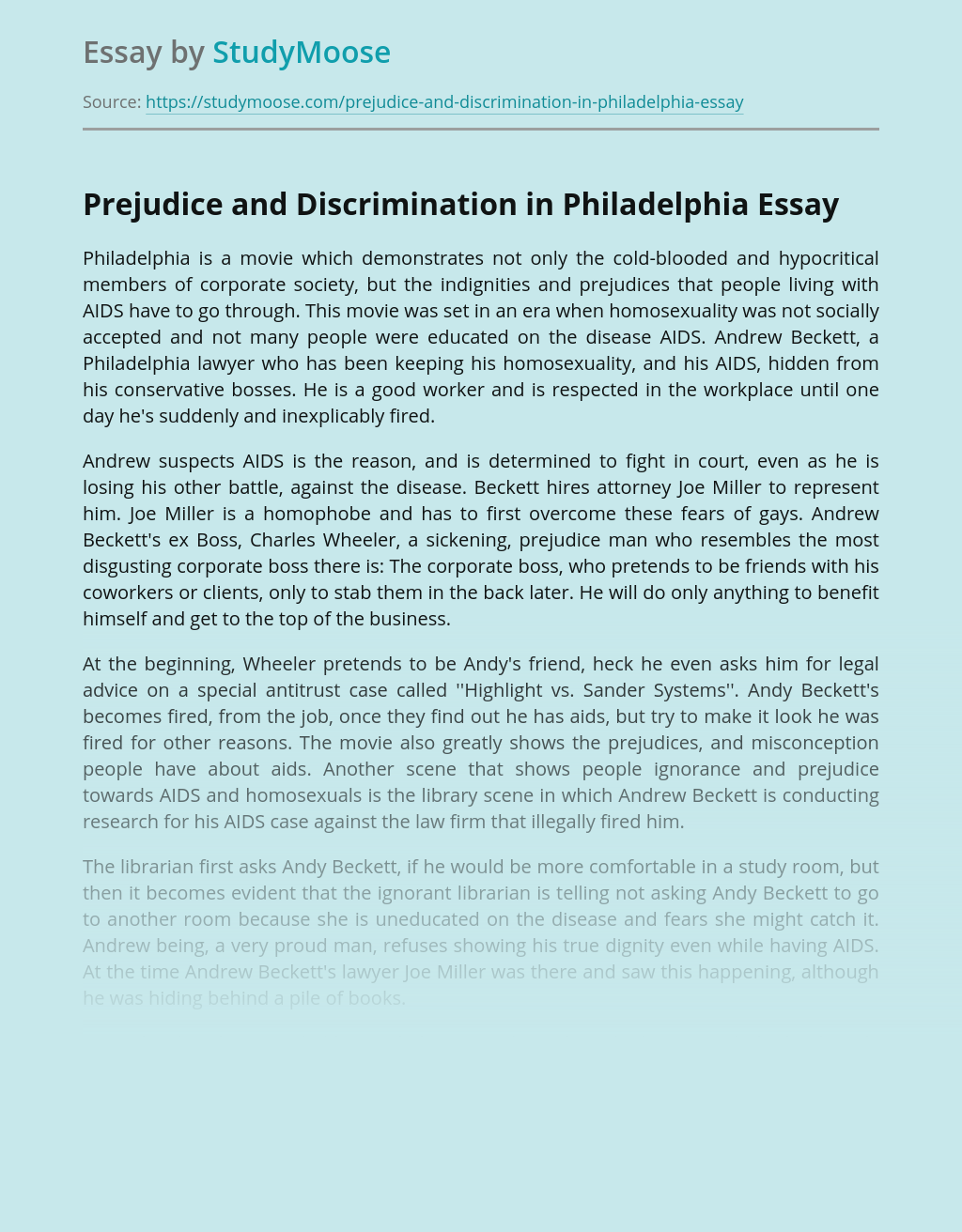 Don’t waste time
Get a verified writer to help you with Prejudice and Discrimination in Philadelphia
Hire verified writer
$35.80 for a 2-page paper
Stay Safe, Stay Original