Imagine being outside on a dark cloudy afternoon in Murphysboro, Illinois and the winds are roaring by you. Then you turn around and you see this monstrous funnel racing toward you. This is what happened to a group of people when the F5 tri-state tornadoes hit them on March 18, 1925. It drove through Missouri, Illinois, and Indiana killing a staggering number of 695 people and injuring 2,027. It was one of the most devastating storms to the United States costing over $17 million (Briannica 54-55).

Don't use plagiarized sources. Get your custom essay on
“ Predicting and Preventing Storms ”
Get custom paper
NEW! smart matching with writer

But why were there so many deaths when some people had a 15 minute to three and a half hour warning?

Our technology has come a long way since 1925, but we still have many casualties from twisters and hurricanes. We need to make a better, more comprehensive warning system to help prevent and predict future storms. Some of the first recorded storms were back in the early civilizations namely the Greeks, Romans, Egyptians, Pre-Columbian, and the Orientals. They would have rituals to try to influence the weather for a good harvest.

For instance the Romans had rituals to worship and praise their Gods to gain their favor so that they would not punish them (Briannica 76).

Another way that people have been trying for many of centuries to predict weather is through plants, animals, and the moon. The people would research and study their patterns to try to find a way how they would relate to the weather. For example when some animals, like horses, will act more energetic or different when a thunder storm is coming.

Another example when there is a halo around the moon at night it predicts that there is going to bad weather tomorrow (Briannica 65). Instead of using the moon and animal behavior, today we have technology to help us predict future storms such as hurricanes.

Hurricanes are one of the longest and strongest storms that hit America every year. Hurricanes are one of the biggest meteorological phenomenons. Every continent has been affected by a hurricane, typhoon or cyclone, in some sort of way Back in 2005 when hurricane Katrina hit the Gulf States it set 14 feet storm surges on the coast line and had 155 mile per hour winds. The hurricane’s winds are not what kill people; it is the debris that the hurricane’s winds carry. When Katrina had subsided there were over 1,500 deaths and over 75 billion dollar of damage (Briannica 58-59).

Why were there so many deaths when it is nearly impossible to not spot a hurricane coming towards heavy populated areas, and then not prepare for what could be the biggest storm of the year? The National Oceanic and Atmospheric Administration, or NOAA, has now made some of the most important and impressive instruments for hurricane research. They are called the WP-3D Orion and Gulfstream IV hurricane hunters (Treaster 38). These aircrafts fly through hurricanes to record data on how hurricanes form and their anatomy.

Along with them flying through the hurricane, they have probes that are shot out of the aircrafts to record the water temperature. The recordings of these temperatures are then transmitted back to the plane for analysis. They have been trying to improve these probes so that they will also record wind speeds, wind direction, humidity, air temperature, and pressure (Darack 3). The warnings for hurricanes have been extended from three day warning to five day warning and the National Oceanic and Atmospheric Administration are still trying to extend the warning time (Darack 2).

They are also now making drones, like the Predator Unmanned Aerial Vehicle, that can fly through hurricanes and do everything that an aircraft with a manned team on it can do (Treaster 39). Another type of storm that the United States is researching along with hurricanes is tornadoes. Tornadoes are one of the most destructive storms that are known to mankind. For example a tornado’s wind speeds range from 40 to 320 mile per hour, unlike a hurricane which ranges from 74 to 155 miles per hour (Briannica 52-53). Tornadoes can form year round and occur just about anywhere.

Unlike hurricanes, tornadoes cannot be predicted over a long term, but there are some advantages with having short term predictions. For instance, for a tornado warning to be launched to the communities there has to be someone, like a tornado chaser, to call it in to the National Weather Services to report that a tornado has touched ground and may harm civilians. Having these people in the field watching for these tornadoes can report it faster for people to take cover, and over the years the tornado warning has advanced from three minute warnings to 15 minute warnings (Magers 2).

These tornado chasers are always hard at work tracking these tornadoes to try to intercept them with probes and other weather instruments. These probes and weather instrument that they are trying so hard to get within these tornadoes are what helps them to further and advance our tornado warnings. In addition, they are also improving these probes to record more information that is needed to further our knowledge about how, where, and when these tornadoes are going to form. To help better predict these types of storms we eed to employ very educated people in the different fields of weather prediction. It would supply jobs for people, but they would have to be qualified in researching and forecasting weather. Yet with additional researchers within the different fields they can gather more information and analyze it faster for forecasting future storms. Another job that can help the researchers record better and more data is having engineers build new and more advanced probes and weather instrument that the researcher can use to record valuable information.

With more people trying to predict these storms it may add more valuable time for civilians to prepare and take cover. Preventing future storm from happening is impossible, but preventing future deaths and injuries from happening is possible. One way we can help prevent fatalities occurring is to start requiring all homes to have a safe room. In other words one room within each home will be anchored to the ground and then strengthened with steel reinforced concrete or steel sheathing to make them debris proof.

Along with building them in homes, we need to also build them in all schools and in big gathering places. These safe rooms can withstand winds and debris up to 250 miles per hour. Some states, like Mississippi and Oklahoma, which are hit by these strong winded storms, are already building more and more government funded safe rooms to protect their citizens (Mississippi 1 and Magers 1). Hurricanes and tornadoes have many similarities, so why can we not use some of the same weather research methods that we use on one and then use it on another to learn more about that storm.

For example we could fly a hurricane drone through a tornado to record the anatomy of it. Or have hurricane chasers that record data that can be analyzed for future forecasting. With America having some of the most severe storms on earth like over 10,000 thunderstorms, 2,500 floods, 1,000 tornadoes, and ten hurricanes per year there is bound for a super storm to hit us (Is Your… 1). Also National Aeronautics and Space Administration, or NASA, says that the United States are going to face more severe and larger storms in the near future (Borenstein 1). 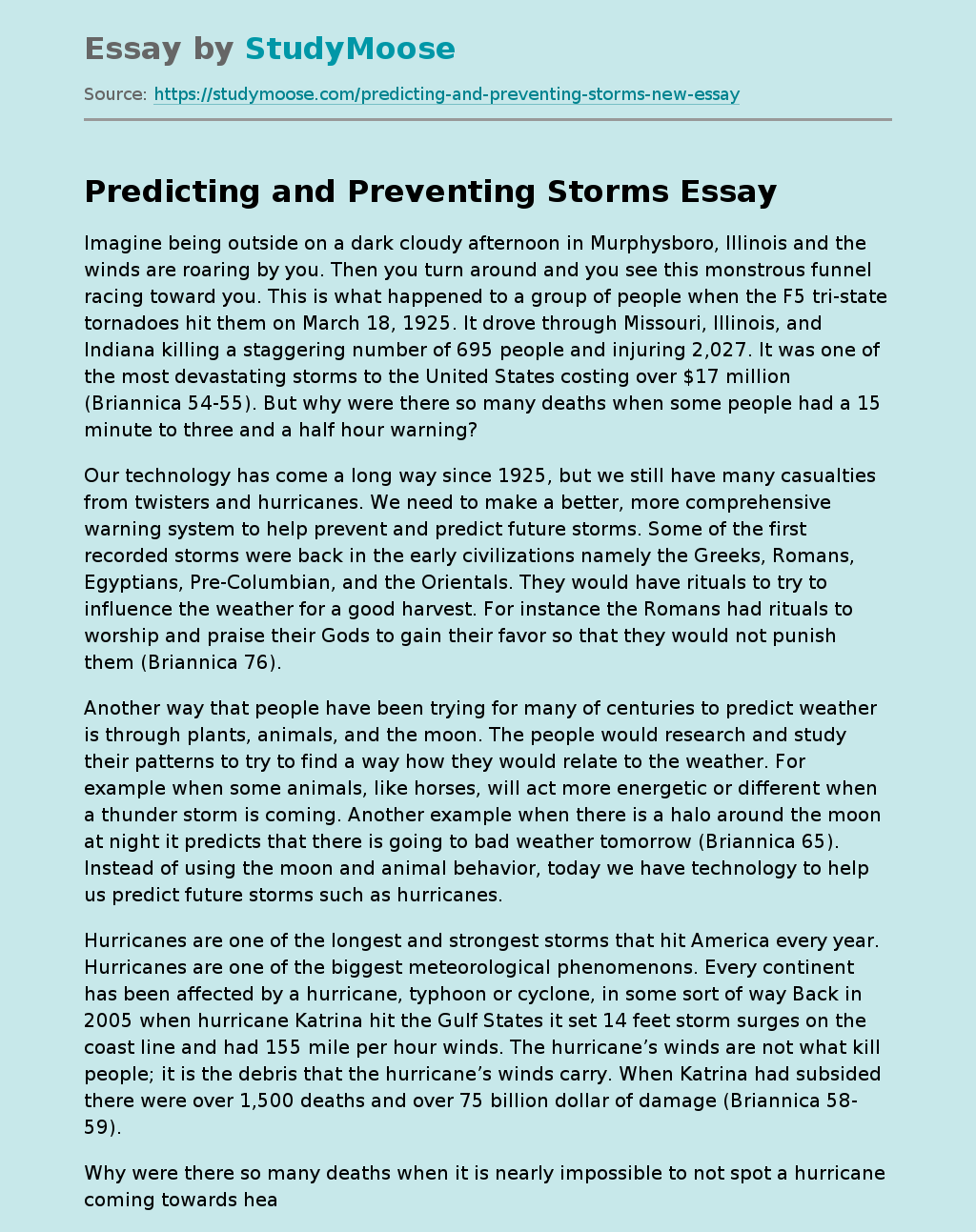