There was a boy he lived high above the clouds in a glass house, the boy was about 6 feet tall, Black hair that is past his ears and covers one eye, his eyes are Grey and Black, under his lip there are 2 dots called snakebites and he had beautiful black angelic wings. This boys name was Rain, his name was Rain because whenever he was crying or sad it would rain in Washington State, Rain was sad a lot so it rained quite often.

Don't use plagiarized sources. Get your custom essay on
“ Precipitation and Mother Nature ”
Get custom paper
NEW! smart matching with writer

One day rain looked down on Washington and saw that it was snowing; this took rain by surprise because if he makes rain then someone makes snow and that person must live near him!

Rain felt excited, in his head he made a plan to fly all around tomorrow and try to find this person. Night came and Rain went to bed so he can have energy for tomorrow. Morning came and Rain woke up feeling better than ever, He got up and went outside, Rain spread his wings and jumped.

Rain felt wind rush through him and then his wings started to soar. Rain didn’t exactly know where he was going but he was either looking for a house or person. Rain thought he was out there for hours until he saw this house it looked like it was made out of crystal. Rain flew over there and landed on the crystal porch.

He walked slowly to the door, He didn’t know what he was going to say until his thoughts got interrupted by the door opening, Rain shot his head up and there stood a girl, the girl took rains breath away.

“Hello can I help you? ” She said, Rain couldn’t even speak to her, her angelic voice kept ringing through his ears “Hello? ” Rain snapped out of it. “Sorry, but I’m Rain I control rain obviously… and I saw it was snowing down in Washington and if I make rain then someone makes snow so I was trying to find that person because I’ve never really talked to someone. ” Rain said out of breath. Oh very well. Why don’t you come inside? I’ve never actually had company either. ”

She smiled Warmly, than Rain did something he never thought he would do he smiled. They walked inside and she asked him if he wanted a cup of tea he agreed and she turned around and Rain studied her figure, She had Pure white hair with bright blue eyes, she was kind of short compared to Rain, around 5”2. She had Fur boots on with white jeans, a white top that formed down to crystals, a crystal necklace that glowed on her chest and white wings that seemed similar to Rains. “I was wondering, What is your name? Rain hollered over to her. “Oh How rude of me, I’m Snow and I control snow. ” She chuckled and gave him his cup of tea “Thank you. ” Rain mumbled and smiled. Rain was very confused on why he was smiling so much he has never really smiled.

“So Rain tell me about yourself? ” “Well I’m a mortal, I’m 6,952 but I have the appearance of a 18 year old. My mother died when I was younger and that’s how I toke over rain. ” Rain finished and looked up at Snow she had pity in her eyes. “Oh I’m very sorry but you must be going I have to make it snow tomorrow and need lots of rest. She smiled. Rain would usually smile when she smiled but he felt like crying. Without saying anything he walked out and spread his wings and flew off. “RAIN, RAIN COME BACK MOTHER NATURE IS OUT, YOU CAN’BE ROAMING. ” Rain ignored her and kept flying to his house. “RAIN PLEASE!?!? ” He ignored her once again, if he looked at her he would probably start crying, He kept hearing the faint calling but didn’t pay attention to it. Rain looked up and saw Mother Nature, Rain froze and fear dropped all through his body.

Rain turned around and bolted to Snow, He turned around to see of she was gonna turn around and she was just about to when one of her peasants paged for her and she turned around relief went through his body and hurried over to Snow. Rain got to snow and they bolted inside, right as they got in Rain bear hugged Snow, “I’m so sorry I should’ve listened. ” Snow let go and smiled up at Rain, “It’s alright, at least you OK. ” Rain spent the night instead of going home just to be safe.

Morning came and Rain woke up before snow so he folded his blankets and cleaned around him and waited. Snow came out about 30 minutes later, “Oh good you’re up! She smiled and put on her Fur boots. “Lets go! ” After long confusing hours Rain and Snow made it to Rains Glass house. “Oh wow, it’s just so… clear. ” she looked at the house amazed, “I guess so. ” Rain chuckled. “Snow can I ask you something? ” Rain asked nervously. “Yes, anything. ” she walked over to him. “Well you see I was wondering if you could be my um Girlfriend? ” Rain didn’t know if that’s what there called but- “Yes! ” Snow said smiling. “Really?! ” Rain asked not believing she said yes, Snow laughed “Yes. ” Rain smiled so big he thought his cheeks were going to fall off. “I’ll never be sad again. ” Rain thought.

Two years have past and it hasn’t rained sense in Washington. One day Rain and Snow were talking and laughing at stupid when there was a knock on the door, “Mother Nature open up! ” Snow looked at Rain shocked and scared, “Go hide… NOW. ” Rain hid in a closet next to the door so he could see, Snow opened the door, “Hello Mother Nature what brings you here? ” snow asked trying to sound polite. “Well I’m looking for a boy named Rain have you seen him? ” Mother Nature asked looking around the house. “Oh I have never met someone named Rain sorry. ” Snow put on a Fake smile and Mother Nature looked at her closely to see if she was lying. Well I guess I will check somewhere else, Farewell darling. ”

Snow smiled and said a quick Goodbye and shut the door. Rain came out, “Snow I will just go to my house until Mother Nature stops searching for me. ” Rain said trying not to show how sad he was. “Oh, I guess Goodbye Rain. ” She gave him a long embrace and smiled up at him and he left. Rain was shutting the door when someone screams “THERE’S RAIN! ” Mother Nature wiped around and looked furious. Mothers Natures little creatures things held Rains arms down so he won’t get away. Mother Nature walked up to Rains door, “Oh Snow come out dear. Snow came out looking at me terrified and nearly in tears, “Yes? ” She said trying to act innocent.

“Snow you lied to me and everyone knows you don’t lie to Mother Nature you know why? ” She didn’t even give Snow to answer, “Because you will get punished, bad. ” Right before Mother Nature could raise her hand and zap snow and kill her, Rain broke free and pushed her off the porch. Snow ran up to Rain and hugged him, “I’m so sorry. ” Rain could only think of how he killed the one and only Mother Nature so the only thing he thought was appropriate was to cry, and down in Washington lied Mother Natures dead body. 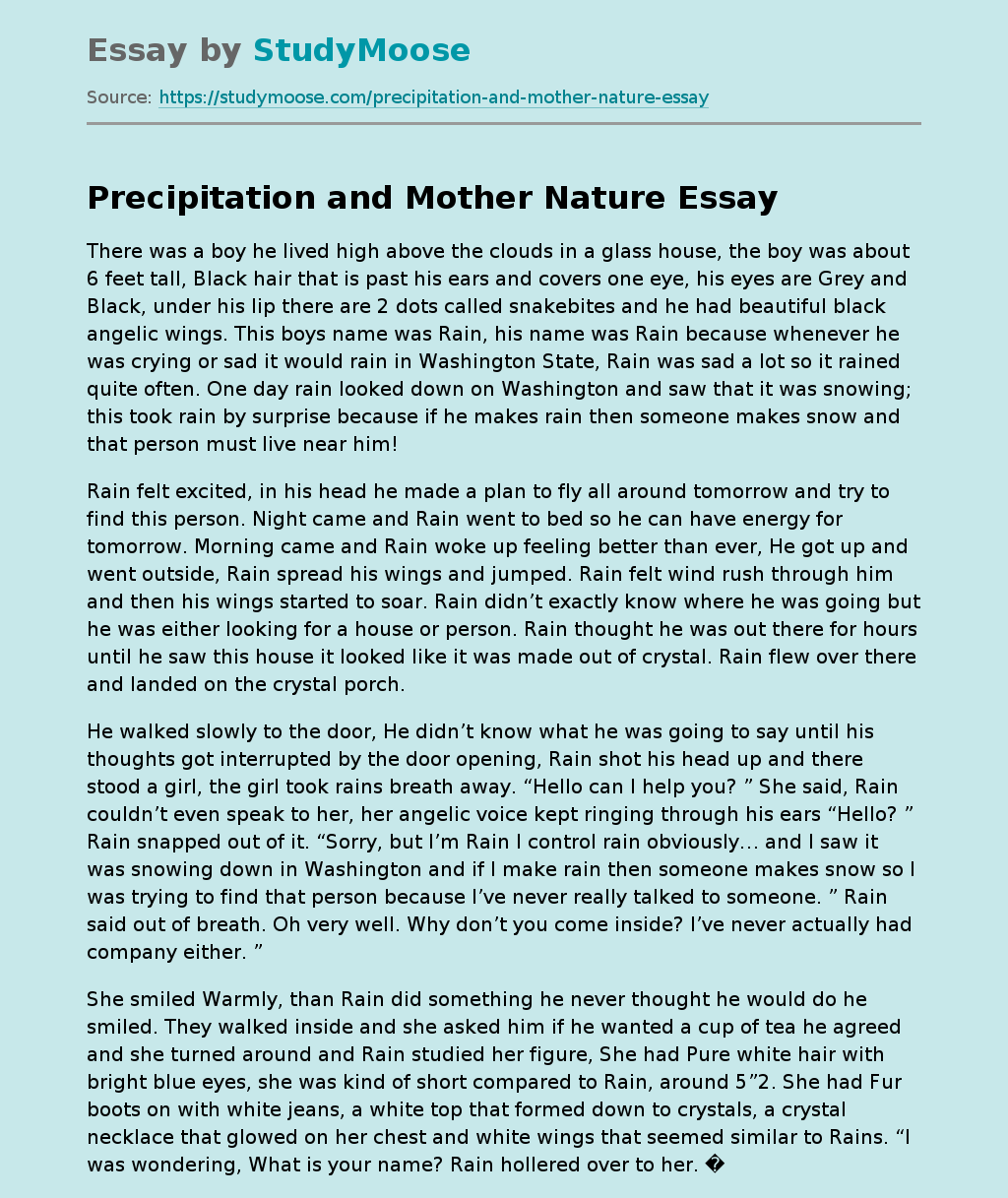