Powerful Women and Submissive Women in Njal's Saga and the Bible

Ancient societies and their cultures traditionally provided women with no access to power. It was nearly universal for women to be treated as subservient to men while being expected to behave mildly and submissively. The New Testament makes no exception. The Apostle Paul explains that through Christ, women are absolved of constraints that the social hierarchy imposes on them, but he later goes on to explain that even in Christ a religious hierarchy still exists. By acknowledging that women are inferior to men in both the social and religious circles, Paul presents women as subordinates.

Don't use plagiarized sources. Get your custom essay on
“ Powerful Women and Submissive Women in Njal’s Saga and the Bible ”
Get custom paper
NEW! smart matching with writer

This contrasts with Njal’s Saga. Through the saga’s characters Gunnhild, Hallgerd, and Bergthora, the unknown author presents the way Icelandic society treats women as property to men, and demonstrates women as powerful and influential characters who hold their individual desires to a higher degree to those of men; acting as catalysts of conflicts among men and the overall plot itself. In Njal’s Saga, the author introduces the Queen of Norway, Gunnhild, in the beginning of the story.

Gunnhild’s position in society as a powerful character is demonstrated when she sends a servant for the traveling Icelanders, Hrut and Ozur, saying, “Tell them that I invite them both to spend the winter with me and that I want to be their friend. If Hrut listens to my advice I will look after his property claim… I’ll also put in a good word for him with the king. ” The two give their response when Ozur says, “It’s clear to me, kinsman, that we have already taken our decision, for I know Gunnhild: if we don’t go to her she will drive us from our land and grab all our possessions.

But if we go to her she will show us the honour she has promised (Njal’s Saga, 7). “ Rather than simply disregarding the woman and approaching the king, here the two Icelanders acknowledge a woman’s (Gunnhild’s) power to take away their possessions and act to avoid this from occurring. Additionally, Hrut and Ozur’s realization of the strategic benefit that follows when submitting to Gunnhild as well as the quoted promise suggests that they also acknowledge that Gunnhild may possess significant influence in decisions.

This suggestion is eventually confirmed when she successfully convinces the King to accept Hrut as a bodyguard (Njal’s Saga, 8). Even though the King is the superior, Gunnhild still possesses the ability to influence him. Her influence demonstrates her ability to assume and exercise a degree of power. It is through her power that Gunnhild goes on to instigate a chain of events. After having Hrut as a lover for several seasons, Gunnhild reasserts her power when Hrut asks to return to Iceland.

Though she lets him return, she sends a curse along with him. She says, “If I have as much power over you as I think I have, then I cast this spell: you will not have sexual pleasure with the woman you plan to marry in Iceland, though you’ll be able to have your will with other women. Neither of us comes out of this well, because you did not tell me the truth (Njal’s Saga, 13). ” The curse she places on Hrut actually comes true (Njal’s Saga, 16). Hrut cannot please his wife and Gunnhild’s desire to hold a degree of dominance over Hrut is fulfilled.

Because Hrut wants to please his wife but cannot, his desires are unfulfilled. This suggests that Gunnhild’s demands and desires are superior to those of men. It is the demands and desires of a woman that instigate events. The author immediately presents Gunnhild in the very first significant event of the Saga, as a woman with power. It is through this that it is ultimately suggested that the tone of behavior of women is established early in the saga. The behavioral tone set by Gunnhild is echoed through Hallgerd, Gunnar’s wife.

Her desire to preserve her honor in the face of Bergthora, Njal’s wife, as well as her position of power allows her to trigger a series of conflicts. At a customary feast between the families of Njal and Gunnar, Hallgerd and Bergthora engage in an argument, attacking each other’s honor. Gunnar refuses to defend his wife, saying, “I’m going home, and it would be best for you to pick quarrels with your servants, and not in the dwellings of others. I’m in debt to Njal for many honours, and I’m not going to be a cat’s paw for you. When the time comes for the men to ride to the “Thing,” Gunnar tells Hallgerd, “Behave yourself while I’m away and don’t show your bad temper where my friends are concerned. ” Hallgerd, thinking that Bergthora is plotting to steal excess wood from a forest shared between Gunnar and Njal, sends her servant, Kol, to kill Svart Bergthora’s servant who is innocently collecting wood (he does so) (Njal’s Saga, 57-59). Here Gunnar clearly expresses his friendship with Njal and his disdain for his wife’s behavior.

Even though Gunnar clearly commands his wife to not act against his friends, Hallgerd refuses to relinquish her anger and desire for honor and disregards Gunnar’s demands. Hallgerd’s desire to preserve her honor by causing the death of Svart demonstrates her ability to incorporate her desires into her decisions. Combined with her authority over her servants, she clearly possesses the ability to make crucial decisions. This particular decision results in the death of another’s family, which in turn instigates reoccurring conflict between Njal and Gunnar.

It could be argued that women do not actually possess power because it is not exercised against the will of man when he is present, based on Gunnar’s absence during Hallgerd’s actions. This argument is rejected because the feud between Hallgerd and Bergthora still disregards their husbands’ demands to retain peace. Disregarding a man’s will, whether in his absence or not, indicates a lack of absolute authority over women. Because of this disregard, women appear to have authority over their own lives and decisions.

Even Gunnar acknowledges this when he “said she would decide her own actions – ‘but I shall decide how the cases are settled (Njal’s Saga, 60). ’” This clearly demonstrates the husband’s inability to assert complete dominance over his wife, leaving only the decision of the consequences of the women’s actions to the men. Again, the desires of the women take precedence over the demands of the men. On the other hand, the Apostle Paul presents women as completely subordinate to men, expected to never act on their own desires and to submit to God and their husbands.

Paul does this by establishing women’s inferiority in both the social and religious hierarchy. He first says, “For as many of you as were baptized into Christ have put on Christ. There is neither Jew nor Greek, there is neither slave nor free, there is neither male nor female, for you are all one in Christ Jesus (Gal. 3:27-28). ” Here Paul is acknowledging that in his society, like the Jews, Greeks, and slaves, women are repressed and that the following of Christ does not discriminate against these social restraints.

Because there is no discrimination through Christ, it could be argued that Paul is preaching religious equality among women. However, he goes on to establish women’s inferiority even in religion. I want you to understand that Christ is the head of every man, and the husband is the head of his wife, and God is the head of Christ. Any man who prays or prophesies with something on his head disgraces his head, but any woman who prays or prophesies with her head unveiled disgraces her head… For a man ought not to have his head veiled since he is the image and reflection of God; but woman is the reflection of man (Cor. 1:3-16). Here Paul clearly expresses that the religious hierarchy is as follows: God, then Christ, then man, and finally women. In that order Paul establishes a chain of command per se. Paul clearly places men above women in this hierarchy, which clearly indicates women’s inferiority to men in religion. His decree that women should wear a veil when praying or prophesizing is reflective of this hierarchy; the veil is a symbol of a woman’s subordination to man and therefore God.

This means that equality in religion does not exist between men and women. Because Paul acknowledges that social restraints on women do in fact exist and because he establishes a religious hierarchy with men outranking women, it is assumed that Paul views women as generally inferior to men in both social and religious spheres. Although Paul’s letters to both the Galatians and the Corinthians do not refer to any specific women, they establish his expectations of women.

Paul’s identification of women as both socially and religiously inferior creates a general air of inferiority for women, which contrasts with the women of Njal’s Saga who possess actual power over men, able to instigate events and conflicts between men. The women of Njal’s Saga are not totally confined to any kind of hierarchy , while those that Paul speaks of are. The role of women in varying societies has been a dilemma in today’s contemporary age. The increasing number of those who view women as independent and equal to men combats firm-standing traditions and cultures that expect women to behave as subordinates to men.

Many religions to this day implement the same expectations (to be mild and submissive to men) of women that Paul shares in both their social and cultural, as well as their religious spheres. In other parts of the world women hold influential positions of power, from independent mothers to high-ranking political officers. The dilemma of the role of women in society is prominent in every society, forming a variety of societies due to their adherence to social and more often than not, religious customs.

Powerful Women and Submissive Women in Njal's Saga and the Bible. (2016, Nov 23). Retrieved from https://studymoose.com/powerful-women-and-submissive-women-in-njals-saga-and-the-bible-essay 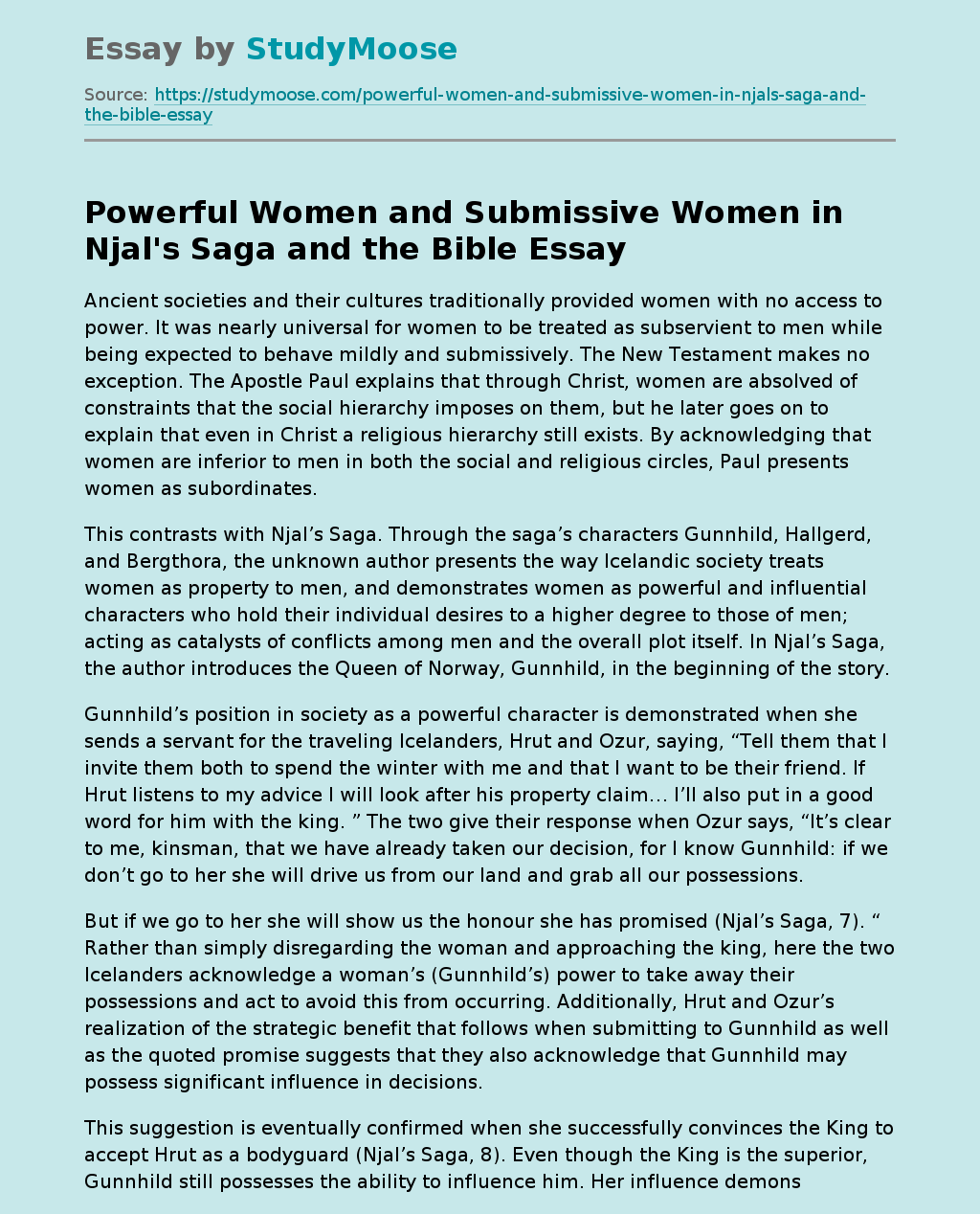