Power of Education: Narrative of the Life of Frederick Douglass

In the excerpt of learning to read and write, Frederick Douglass describes the struggles he faced to read and write and the power of knowledge, which he used to escape from slavery. He describes the situations he had gone through for being an African American slave. His writings show is the cruelty of the slaveholders towards their slaves and the inhuman conditions they have faced. Douglass describes that the slaveholders were cold-hearted towards the slaves. All at once, Douglass needed his readers to understand that slavery is a cruel and vicious act.

Don't use plagiarized sources. Get your custom essay on
“ Power of Education: Narrative of the Life of Frederick Douglass ”
Get custom paper
NEW! smart matching with writer

His mistress never tutored him again besides, she used to get mad if she saw Douglass with a book.

One of his audience were African Americans for most of his companions don’t even recognize the importance of education. He wanted those slaves to understand the power of education. Throughout his narrative, Douglass explained how he used those children to teach him how to read and write in exchange for food. Douglass writes, “Have not I as good a right to be free as you have?”[39]. He most likely chose these kids as his audience because he knew that those kids could change the future.

He used to tell them that they will be free once they flip twenty-one but, he must be as a slave, throughout his life. This event could have been his method of convincing those young ones’ that slavery is a cruel act and to look down on it so that they can change the lives of African Americans.

Douglass opens his excerpt by describing how his mistress changed from a nice-lady to a mean person. She used to get mad whenever she saw him with a book. He also described the white children he made friends with, so that they can help him how to learn to read and write. Douglass slowly started understanding the things going on around him, which he did not like it at all. One day, he met two white men who tried to encourage him to escape to be free. However, Douglass ignored them because he thought that could be a trap led by white people to catch the slaves while running away and return them to their masters. This shows us that Douglass had to go through a lot of trouble to learn to read and write.

Douglass expresses”I would then make the letter which I had been so fortunate as to learn, and ask him to beat that; In this way, I got a good many lessons in writing…” (Douglass 349). Douglass learned to write by challenging other kids that he knew more words than they do. He finally started making his own decisions, which made him discover who he was. Throughout the narrative, Douglass described that his slaveholders were against the education to slaves, because they believed that a slave should not be educated and independent.
“I was now about twelve years old, and the thought of being a slave for life began to bear heavenly upon my heart.” This shows us how difficult it was for a kid to undergo such situations. Douglass and his fellows had to face a lot of problems and inequality by their masters. Sometimes Douglass wished himself dead because he couldn’t bear slavery anymore.

Frederick Douglass knew that his only way to freedom was possible through education. He made education as his goal and started to work on it. Douglass also said whenever he was in a separate room, he was suspected of reading by his master. He started to lose his hopes until he found the word abolition. He used to pay attention whenever he heard the word. Educating himself made Douglass confident about his decisions and also made him think that he was close to freedom. Sometimes Douglass wished himself dead because he couldn’t bear slavery anymore. “Freedom now appeared, to disappear no more forever…[41]” Douglass was so confident that one day, he will be free from slavery. He started to see a new perspective on life.

Douglass was happy to understand that he was close to freedom, but at the same time, he wanted to revolt against the eduction because he believes that education made him able to understand the horrible facts of slavery.

Certainly, one of the purposes of the narrative is to tell the facts about slavery he faced and wanted people to stand against it. He was one of the few ex-slaves who got an opportunity to speak against slavery.

Power of Education: Narrative of the Life of Frederick Douglass. (2020, Sep 23). Retrieved from http://studymoose.com/power-of-education-narrative-of-the-life-of-frederick-douglass-essay 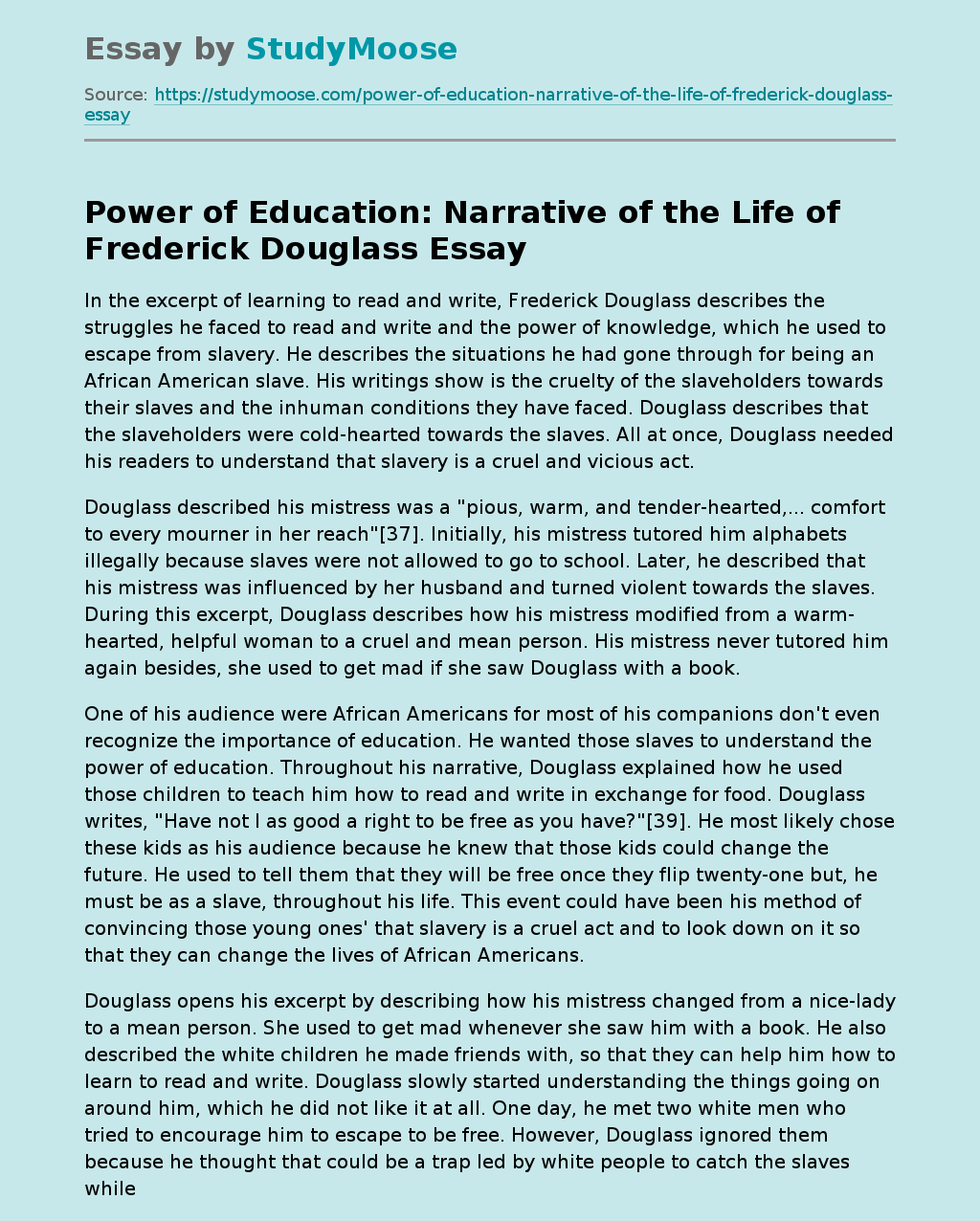