With the advancement of poverty in the United States it is time to solve the homeless situation. Thousands of Americans are homeless and taking up space on the city’s streets. A simple solution to this problem would be to allow the homeless to reside in landfills. They would be able to sort through the waste to find appropriate cardboard boxes to live in. This could also be used as a form of employment allowing them to sort through recycling to improve the environment.

Don't use plagiarized sources.
Get Your Custom Essay on Poverty Satire Just from $13,9/Page

It is also a statistical fact that many Americans throw away food that goes untouched. Not only would they have a permanent residence of their choosing but this also insures that they would have plenty of food to maintain their strength to sort trash.

The act of throwing food away is often forgotten, but with this new profound idea other Americans can feel charitable each time they throw away their trash. Their leftover food will go straight to the landfill and become a nice snack or a whole meal for one of the landfill residents.

Society will no longer have to worry about starvation because essentially anyone can provide for the poor. People will eventually feel better about the act of throwing away hundreds of thousands of dollars of wasted food knowing that it will go to a family in need. However, people will be questioning why it has to stop with food. Used tissues, old dental floss, and that rusted razor that everyone has lying about will ensure that the landfill residents have acceptable hygiene. The rainwater combined with the last few congealed drops of some liquid soap will keep the landfill inhabitants fresh and clean. There will be competition in the landfills for the best food and supplies or the best cardboard, but that should be promoted because they need to understand that although everything will be essentially thrown out to them, it will still be “survival of the fittest”.

The landfill inhabitants will be able to sleep in peace knowing that their shelter was handmade. Newspapers and junk mail will be of great use to the residents because it could provide as a floor or even a roof. Although there might be a rise in identity theft because of the information civilians have thrown out in the trash, it should come as a lesson because people should know to shred their important documents before throwing them out. The landfill residents can also use their resources to better their education. The writings and nutrition facts on the backs of cereal boxes along with the short stories about fields of lavender and honeysuckles on lotion bottles can easily suffice as a quick English lesson. The shelters in the landfills will consist primarily of cardboard boxes but it will give the residents a chance to express their creativity. The residents could even form small village like shelters within the landfill to be better protected from the other scavengers. The fight for the best supplies will endanger quite a few residents, but in the long run they should be able to value the relationships they might form with one another.

Many people would probably argue that this solution to homelessness is too dangerous or inhumane but it will prepare the homeless people for a life after the landfill. The landfill would offer a refuge for the poverty stricken victims to be provided for and it would also allow the homeless to provide a service for the public. The landfill already offers such valuable resources that are just going to waste. It would be unreasonable to think that the landfill residents couldn’t sort through the trash to figure out what could be recycled; this could be a form of employment in the landfills. Ensuring that the public will be rewarded for their generous donations, the homeless would essentially pay back the public with the use of reusable goods. The rising homeless count is rising and this is an adequate solution to a major problem. Not only would the landfill provide a new home for the homeless it would give city residents peace of mind knowing that the homeless people are safely away out of sight. 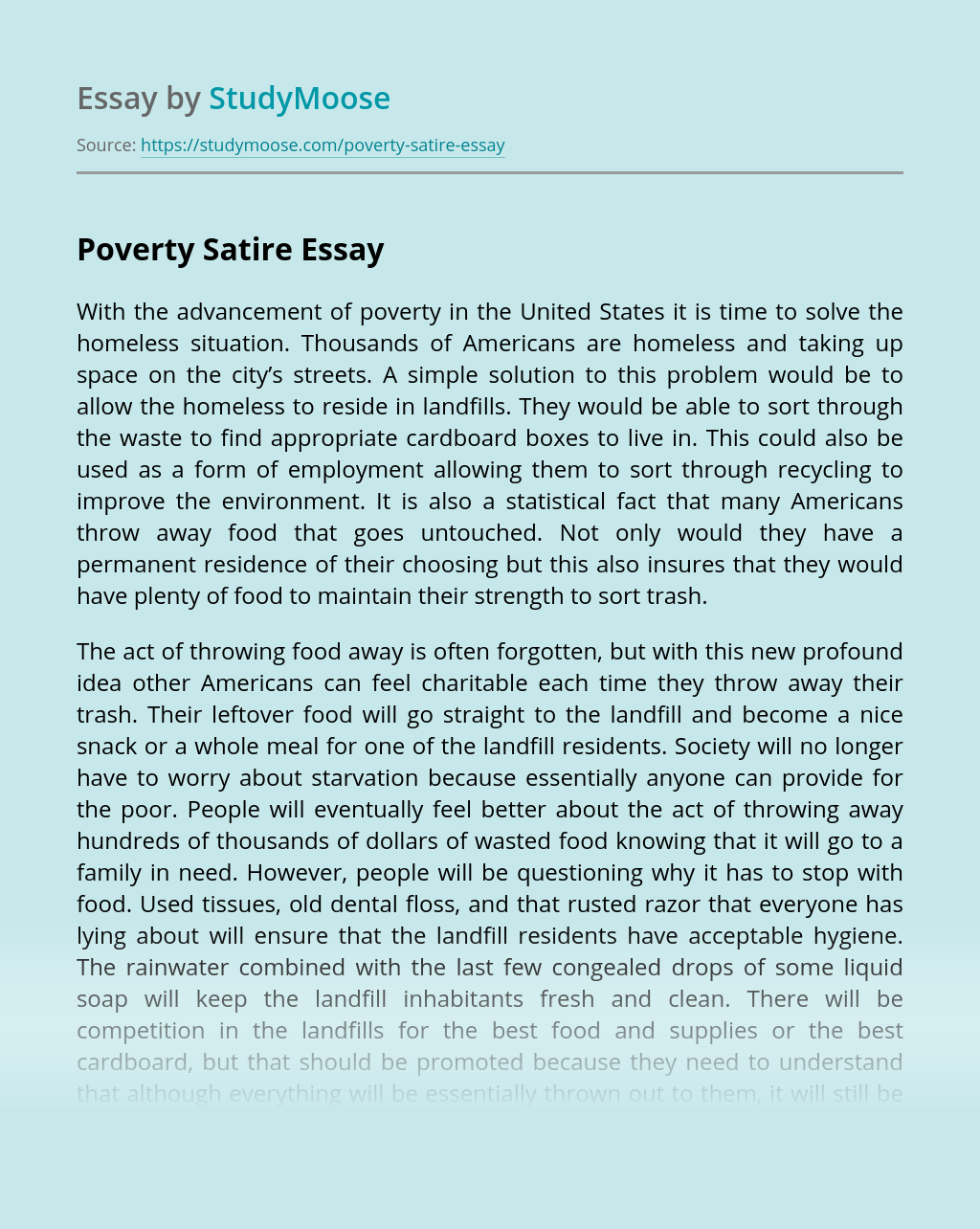 The Impact of Poverty on Children in America

The U.S. is among the richest countries in the world today, yet millions of people still live below the poverty level. The number of American children living in poverty is increasing day by day. “Poverty in America has become a great menace to children’s wellbeing as it affects them emotionally, socially, and even in their...

In the early 1960’s, the epidemic of juvenile crime began to take shape. The problem of juvenile crime is becoming an increasingly pressing matter in America. Anyone who watches the news on television or reads the newspapers is well aware of the urgency and intensity of America’s juvenile crime problem. Effectively establishing the causes of...

Get Essay
Positive Functions the Poor and Poverty Has on Society

There is a lot of positive functions poverty and the poor have on society. The existence of poverty makes sure that “dirty work” is done. “Dirty work” is classified as dangerous, physically dirty, temporary, undignified, a dead-end, underpaid, and menial jobs. In America, poverty functions to provide low-wage labor pools that makes people, willing or...

Disadvantages of Large Population of a Country in Relation to Development

“Overpopulation is a curse to the society’s overall growth. Several countries facing this problem are trying to control their population growth. India, for example, has been introducing family planning programs to curtail the growth of its population.” Population growth in a country using a capitalist economic system means more demand for products and therefore economic...

Families in poverty in Australia

One of the important global plan is to eliminate poverty by 2015 as per UN Millennium Development Goals. Every day approximately 30,000 children are losing precious lives due to living in precarious conditions. (Make Poverty History) It is high time to bring a big change in the lives of people who deserve to meet the...