Poverty is generally accepted as an undesirable condition. However, defining poverty is extremely difficult and several definitions exist. According to Dennis brown (1995), He defined poverty as a state in which an ‘‘individual or group possesses less than some standard which has been defined as acceptable”. In the world we live it is generally accepted that there are two kinds of poverty, public and private poverty, however, the focus on poverty in this paper relates to Jamaica and its struggle to vanquish poverty.

Don't use plagiarized sources.
Get Your Custom Essay on POVERTY IN JAMAICA Just from $13,9/Page

Poverty has been a persistent feature of Jamaica’s environment from the post-emancipation period, and from their, it has been a subject of continuing concern and analysis for Caribbean academics and welfare practitioners. It is mainly in the past decade the notion of poverty and poverty reduction come to occupy the central position in both local and international policy. With boldness, Jamaica promulgates policy statements that poverty will be eradicated. With this continuing dance around the crisis of poverty, the distinction between cause and consequence has become increasingly blurred, with the result that poverty reduction policies have little chance of reducing the extreme risks and hardships that Jamaicans face on a regular basis.

In both national and international dialogue, the assumption remains unchallenged that poverty can be reduced if only one could correctly and channel the assistance directly to the deserving poor. The deserving poor are considered the vulnerable because of their demographic of physical characteristics, which may predispose them to health risk situations. Even though every individual will gladly accept any help they can get it is considered unfair to the real less fortunate’s of society According to the Planning Institute of Jamaica, over the past decade, the percentage of the Jamaican population classified as poor fell from 30.5 percent in 1989 to 16.9 percent in 1999. With an estimated population of 2.58 million persons, this was equivalent to approximately 400,000 persons who were unable to meet their basic needs. Assuming that three-quarters of the poor were located in rural areas, as in 1998, an estimated 300,000 rural persons lived below the poverty line. The methodology officially used in calculating the number of those who fall below the poverty line follows international practice and is built around the cost of feeding a low income family.

It is therefore highly insensitive to the changes in food cost. Most basic foods were imported; the effect of 1991 deregulation of the foreign exchange was immediately reflected in the poverty level, which soared to 44.6 percent. Since 1992 the poverty level has followed a steady downward path, until 1998 when it was estimated at 15.9 percent. One of the reasons why poverty permeates Jamaica’s environment is due to a number of factors that needs immediate attention which is still present in the 21st century today. Rural households are large and includes more children than in KMA( Kingston metropolitan area) households, rural area contains larger proportions of elderly and small proportions of persons in the prime working ages, as well as they can only afford to spend only two-thirds of what (KMA) counterparts spend on food beverages for each household member and their members a more likely to report being ill and less likely able to seek medical care.

The question pertaining to who are considered as the poor is generally taken as sufficient justification for the heavy emphasis of current poverty reduction programs on the two target groups of children and the elderly. However in an article named (“A Rose by any other name”). A woman by Rose Morgan has been sitting outside the villa medical centre in Mandeville who came from Westmoreland in her early 20s seeking job opportunities. According to rose she came to Mandeville and she was pursued by a man that accommodated her at his home, but eventually he died. Now Rose lives off the sincerity of those that pass her by the street. Poverty receives considerable less attention, particularly because of the inadequacy of employment. If rose had a job which she said was impossible to get, she would be else where rather than begging on the streets. From 1995 the government has been trying to get rid of living conditions such as these. The formulation of the program called (NPEP) National Poverty Eradication Progamme, coordinated by the Office of the Prime Minister was design to improve the state of the country. This Programme serves as an umbrella for existing programs today such as the Human Employment and Resource Training, (HEART), Microenterprise credit programs; poor relief; public assistance; and food stamp Programmes. Social and economic support Programmes were also developed to promote the employment rate.

Employment is seen as one of the major influences on poverty. On November 28, 2012 a Gleaner article entitle, (“Youth Unemployment still triples national average”), shows that in spite of the government trying to eliminate poverty from Jamaica’s landscape it has some how still manages to inhabit the air we breathe. According to Director Dr Gladstone Hutchinson, he states that STATIN data during a review of the quarterly economic performance, Jamaica’s labour force increases by 20,600 in the past year (2011). The youth unemployment has consistently run two or three times the national average. The percentage of unemployed youths was 28.7%. The only improvement in jobless rate was on April 2012 (14.3%). The back of poverty is hard to brake, and I insist because majority of those without jobs are unqualified and it is either difficult at their age to pursue any form of higher education or they have no source of funding to do so. These groups of people falls within the poverty category called the consumption group. For operational purposes, the Government of Jamaica (GOJ) has enunciated three categories of poverty which are: Chronic Poverty, which exists when an individual is incapacitated and incapable of independently procuring the requisite means of sustenance. This category includes persons who are unable to work because of chronic physical and mental infirmity or old age and children without parents or with parents who are incapacitated. Those in this category of poverty are the primary beneficiaries of the welfare Programmes that fall under the (NPEP). Consumption Poverty, which refers to able-bodied adults who are unable to meet their basic consumption requirements. This means, they fall below the poverty line as determined by mean per capita consumption expenditure. This category may include both the employed and unemployed.

Resource/capability Poverty, which refers to those who are deprived of access to private and public resources such as a basic education, basic health care, basic housing, transportation, healthy environment, water and employment. This deprivation of these basic resources in turns results in impoverishment. Categorizing poverty in this format allows the government to allocate the necessary assistance to the right persons. Hence they will not give those who need help less more than what they deserve. One of the most diverse Programmes, aiming at breaking the back of poverty is the PATH Programme. It is said often times that the children are the future, it is clear that the aim of the Programme of Advancement Through Health is to break the generational struggle starting with the future of the country. Even though Path assists the elderly and the incapable, most of the focus is placed on the school which is essential for anyone’s country. On February the 4th, 2007. The Sunday Gleaner had an article about PATH, (“Out of Poverty”) emphasizing the 1.2 million spent on path beneficiaries which 70% were to school children. PATH is a conditional cash transfer (CCT) Programme funded by the Government of Jamaica and the World Bank and is aimed at delivering benefits by way of cash grants to the most needy and vulnerable in the society. In the article the Programme is being questioned why everyone is not benefited from Path.

However it was stated that it is not because of budget limitations, but path is working on improving the attendance and performance rate in schools. In essence it justifies my point that Path is attacking poverty at the roots. It was introduced Island wide in 2002. With PATH helping to assist in the elimination of poverty, it still does not conclude that path alone can do it. On the 6th of October 2006 in the Daily observer an editorial comment was made where the writer was in favor of the (PIOJ) and (STATIN) survey on November to the month of May in 2005. It states that poverty fell by 12.7 percent. On the contrary though he states that, “While we recognize that each intervention by the necessary Programmes are important, we are convinced that they do not provide the long-term basis for the eradication of poverty. For the real solution to poverty is sustained and sustainable economic growth”. In correlation to the writers comment, the (NPEP) comprises of the Micro Investment Development Agency (MIDA) which was set up to support the microenterprise as mentioned earlier. It provides persons with the opportunity to gain employment through the establishment of their own businesses (2003). To date (MIDA) remains among the single largest providers of microcredit in the island. MIDA alone has been responsible for providing well over one billion Jamaican dollars to the micro-enterprise community between 1992 up until this very day.

Hundreds of student graduates from HEART yearly with a skill and is now contributing to Jamaica’s economic growth. For that it seems as though the country’s quest to illuminate poverty is gradually taking place. The literature on poverty in Jamaica dearly indicates that it is a phenomenon associated with low educational attainment and often affects those who are unemployed or self-employed. Other contributing factors to poverty in Jamaica can be traced back to the increasing birthrate, delinquency in schools, child abuse and possibly drug abuse. It is each individual responsibility to profile their actions into actions that will in turn benefit them and the society they reside in. 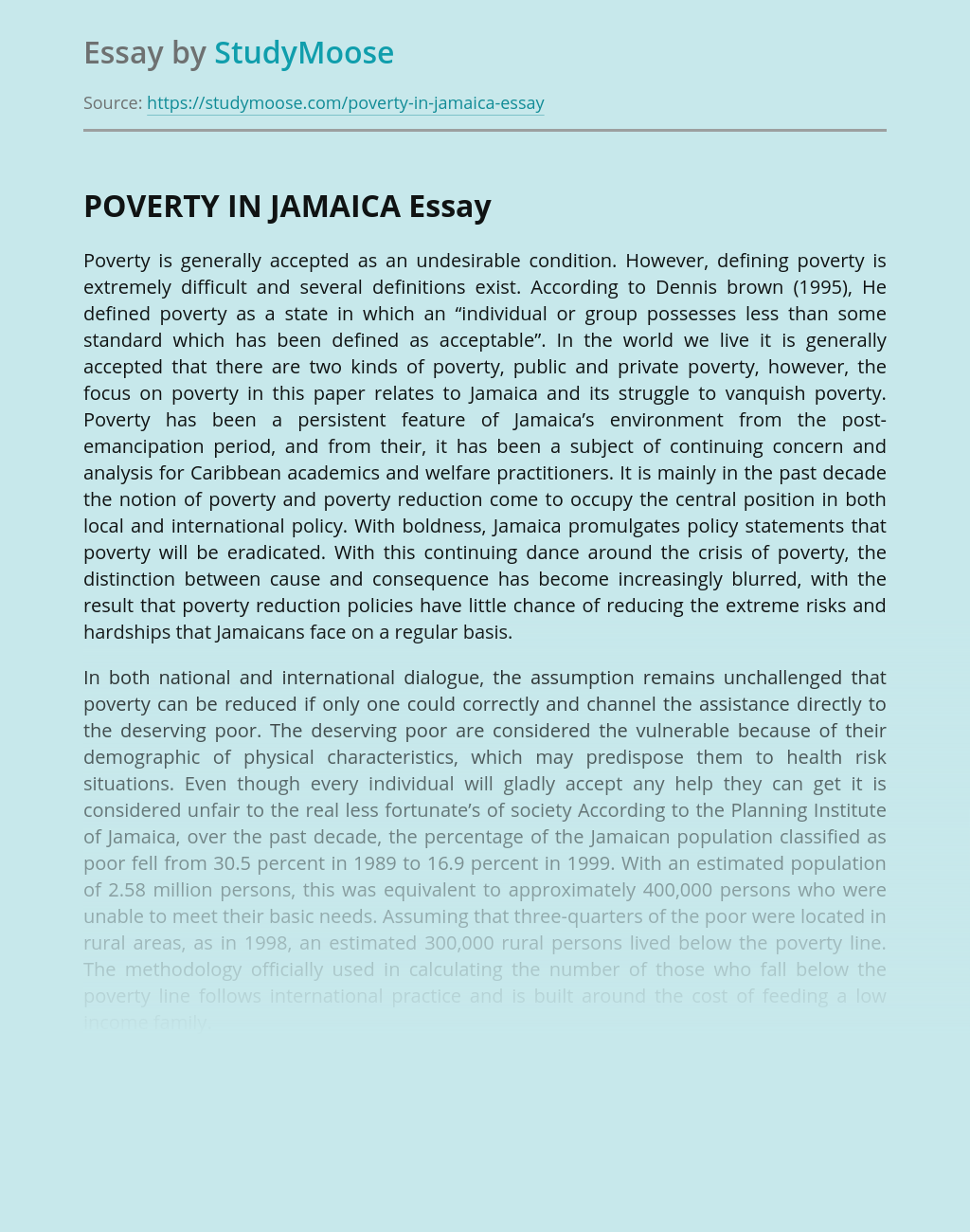 Today, many firms are enjoying a monopoly of their products/services in the market. Don't use plagiarized sources. Get Your Custom Essay on POVERTY IN JAMAICA Just from $13,9/Page Get custom paper Monopoly may be defined as the complete control over a commodity enjoyed by a particular company in the market. There will be only a...

1) Oligopoly is when a particular market is controlled by a small group of firms. For example supermarkets, there are three (there usually exist three companies) companies which dominate the market, Wong and Metro, Santa Isabel and Plaza Vea, and Tottus. The main assumptions that economists make when talking about a situation of Oligopoly are...

Economics Introduction Differentiate between free market economy and mixed economy        Economics is part of business that deals with the production, distribution and consumption of goods or services in the society (Paul, 2008). Economics contains many aspects that helps define different markets, which attribute to the applying of goods and services and also...