Following a traumatic event, the mind sometimes stores and hides away the details and memories of the event and then sends them back at unexpected times and places, sometimes years later. It does so in a way that makes the recall just as disturbing as the original event and sometimes more. Post Traumatic Stress Disorder is the name for the mental condition acquired following a psychologically distressing event outside normal human experience. There are five things that determine that someone has this disorder and there are no cures for this disorder, only therapy which lessens the burden of the symptoms.

The root of the disorder is a traumatic event which places itself so firmly in the mind that the person may be attached by the pain and distress of the event indefinitely, experiencing it again and again as the mind stays in the past rather than the present. The disorder is quite common, damaging the lives of approximately 8% of the American population (5% of men and 10% of women).

Some people may suffer from only a few mild symptoms for a short period of time and other people may be subjected to symptoms for longer periods of time, maybe even years. However there are also people who experience great traumatic events that may never develop any symptoms at all. The symptoms are a reaction to an overwhelming traumatic event, or series of events. There are many situations that may lead to developing Post Traumatic Stress Disorder, including: serious threats to a person’s life, to their children, to their spouse, close friends, or to relatives. Sudden destruction of home or community and witnessing the accidental or violent death or injury of another can also lead to the development of Post Traumatic Stress Disorder.

Characteristic symptoms include nightmares, re-experiencing the event, avoidance of any images, sounds, or smells associated with the event or a lack of general responsiveness to a person’s surroundings, increased arousal that previously wasn’t there, and duration of the disturbance for at least one month. When a bomb exploded in the Oklahoma Federal building in 1996, hundreds of lives were affected. Not only are the people who were in the explosion in danger of re-experiencing it over and over, but so are the people who witnessed the aftermath, from bystanders to the rescue workers on scene. The surviving employees not only were physically injured in the blast, but saw the deaths of their coworkers and children. For the rescue workers who arrived, many saw death and people who they could not help and their feelings of helplessness and guilt could turn into painful memory recall and nightmares. The first way to determine a person has the disorder is that the person was at one time exposed to a traumatic event involving actual or threatened death or injury, where the response was marked by intense fear, horror or helplessness.

This event may have taken place only weeks ago, or as far back in memory as forty years. The disorder is most commonly found among survivors of war, abuse and rape. It also occurs after assorted crime and car accidents, as well as after community disasters such as hurricanes and floods. Workers of rescue missions are subjected to situations of severe stress frequently. Many emergency response workers like police officers and EMS drivers may become overwhelmed by the trauma they see and end up with painful recollections themselves. Second, the trauma is re-experienced in the form of nightmares, flashbacks, painful memories, or unrest in situations that are similar to the traumatic experience. Sights, sounds, and smells can evoke panic, terror, dread, grief or despair in individuals. Commonly, in the case of war veterans, the patient may be mentally sent back to the time and place of the original traumatic experience.

A veteran who hears a startling noise like a car backfiring may hear gunfire, which will trigger flashbacks. These flashbacks can last a few seconds, minutes, or up to days where the person behaves and reacts to everything as if they are in the original setting. Third, there is a lack of emotions and reduced interests in others and the outside world. The person is attempting to reduce the likelihood that they will expose themselves to traumatic sounds, images, and smells. Because of this it is extremely difficult for people with Post Traumatic Stress Disorder to participate in meaningful relationships.

Fourth, there are random symptoms including insomnia, irritability, nightmares, fatigue, and outbursts of rage. Last, symptoms of each category must show a big effect on the person’s social abilities or other important areas of life and all of these symptoms must persist for at least one month. Since the Iraq War, 5% of U.S. soldiers have been diagnosed with Post Traumatic Stress Syndrome. Those with the most combat experiences are the most likely victims of the disorder. Also, Post Traumatic Stress Disorder develops mostly in soldiers who were don’t have very stress resistant personalities and have low levels of social support. To recover from any stressful event is the victim has to know that he or she isn’t alone and that others care about his or her recovery. The soldiers who return from war with no one to share their experiences with are likely to re-experience warfare through nightmares and flashbacks. After witnessing the deaths of enemies and friends, soldiers without social support are likely push their pain inwards which then has a good chance of escaping out of the body through symptoms. PTSD can become a chronic disorder that can stay for decades and sometimes a lifetime.

Chronic patients go through periods of relapse like many diseases. Some people suffering from the disorder may turn to other ways of dealing with their stress if untreated. Depression and addictions, such as alcoholism, drug abuse, and compulsive gambling are a common way for victims of the disorder to self-medicate. Therapy is the only known method of treatment, but there have not been substantial gains in this field for recovery of patients. After four months of treatment, Vietnam veterans showed no long term effects from their therapy in a study conducted by the National Center for Post-Traumatic Stress Disorder in New Haven. The men received individual and group psychotherapy and behavior therapy, as well as family therapy and vocational guidance. Even though they left reporting increased hope and self-esteem, a year and a half later their symptoms were actually worse. They had made more suicide attempts and their drug abuse had increased. Healing can only take place when the person can get rid of the memories at will, instead of suffering from the memories being recalled involuntarily. 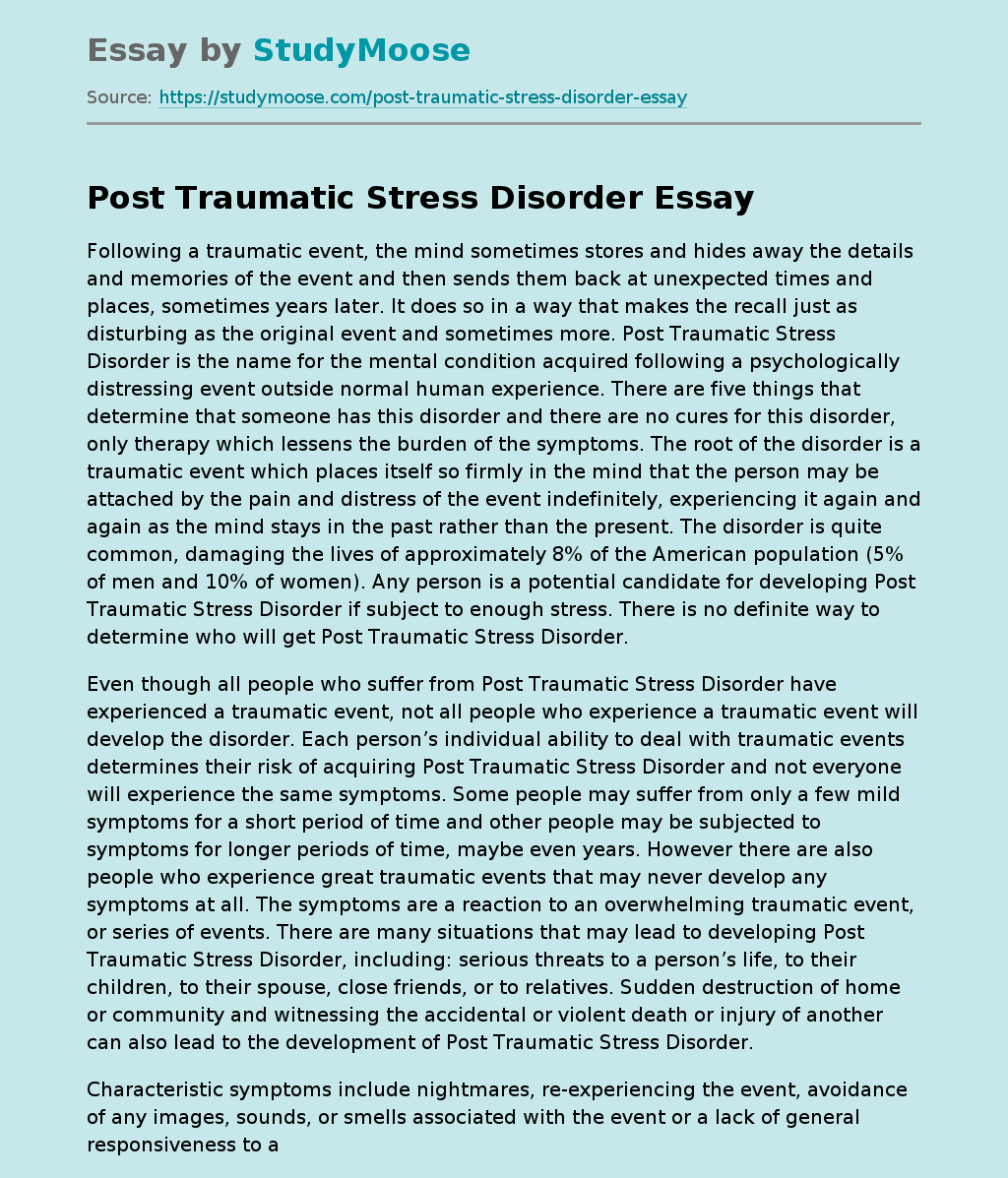