Positives and Negatives of the Utopian Society

Sir Thomas More wrote a novel named Utopia about a country that existed only in his mind. More used the story to explore his views and feelings about politics and government. People still believe that the story holds truths that are relevant today even though More wrote Utopia during the Renaissance. Utopia contains information about More’s vision of a perfect society. The Utopian government was able to overcome or prevent all problems facing the country. The government first segregates the island by digging a canal around it so that the ocean will create and island that has hazardous straights as it’s only means into the island.

Don't use plagiarized sources. Get your custom essay on
“ Positives and Negatives of the Utopian Society ”
Get custom paper
NEW! smart matching with writer

It then handles the many aspects that a community faces in a manner that, for the most part, creates an enjoyable environment to live in. There are however a few points that I found a flaw in. Personal wealth, religion, and justice are three areas of the Utopian society that have positive and negative sides.

The first area of the Utopian society that I found weakness in is the lack of personal property. Every person who could get up and work did so for six hours a day. People were not allowed to be idle as it was against the law.

Actually their working hours are sufficient to provide not only an abundance, but a superabundance of all the necessities and conveniences of life” (p. 35). Since every person contributes to the production of every food or material product in the commonwealth, there is no poverty and no greed.

This concept looks great on paper. I feel, however, that this lack of owning anything would cause people to feel like they don’t work for themselves. There would be no reason to toil over soil that was hard to sew if you knew you were not going to starve regardless of what you produced.

The next part of Utopian culture that I disagree with is its religion and the policy it has on holidays. The people are able to worship any god they wish in anyway they wished.. The people of Utopia are able to partake in any religious ceremony they choose. Each citizen worships as he pleases and as long as he does not force his beliefs onto others he is fine (p. 70). This freedom gave people a very important right. It helped to end many problems that occurred during the early years of Utopia (p. 72). This policy is a magnificent idea and it surprised me that no one who actually ran a country had thought of this.

The only flaw that I found in Utopian religion was that all citizens had to the same temple at the same time for the festival of the first and last days of the month. These days, called Cynemern and Trapermern, were celebrated in a common temple in the city. The name of no specific god was used in the celebration except Mithra. Since every sect of religion used this name for their god. The government designed the services in this fashion so that they would not offend any religion (p. 77). The use of no specific name of a god is a good way to avoid offending people, but it also makes the ceremony very impersonal.

It seems to me that it would have been more beneficial if each group of religious Utopians was able to worship in the temple on their own day. This way they would be able to call their god anything they wanted and would feel surrounded by people with their same beliefs. The final area with some aspects is the Utopian justice system. The government does not have many laws; they do not see a need for it. The Utopians see no need in having many laws when there is not enough time to spend to gain the understanding for a larger number. Actually, the Utopians feel that honoring good citizens as a better way to develop morals.

Displaying the names of people who have done good for the commonwealth, is thought to be a good way to detour others from acting against the common good. The laws that are made are very few and are made to enforce the desired ethics. If a law is broken, the punishment is normally left to the head of the family, a male, unless the crime is so bad that a public punishment would be better for the people of the city (p. 60). There are no standards for the punishment according to the wickedness of the wrongdoing, the senate decides on a case by case basis. In court, people represent themselves.

The worst criminals are punished by bondage. People in bondage do the distasteful work of the community. They do not stay in prisons and their only distinctions from citizens are a few physical and cosmetic differences. Even those punished by bondage are able to redeem themselves with hard work and patience (p. 59-61). Using bondage for severe crimes as opposed to capital punishment is a moral punishment. Bondsmen also provide service to the country whereas if they were put to death, no benefits would be received. However, the freedom they are given allows them the opportunity to endanger the public again.

More laws and increased security of bondsmen would create an environment safer for all Utopians. There are many positive aspects of the Utopian justice system. The most prevalent is the court itself. Many cases are kept out of court due to family punishment. With no lawyers, the judicial process is much quicker than today’s court system in America. The most negative part of the justice system is the lack of laws. A society should regulate their people by rules, not just positive reinforcement. There should also be regulations of punishments for each crime.

Without that there is always a place for unfairness. Officials should keep convicted bondsmen under a closer watch and make them more visible. These are the most vicious criminals in the country. The citizens should treat them as such for their own safety. The society in Utopia has positive and negative elements in religion, personal rights, and justice. With a few minor changes, I feel that the negative could be eliminated. Utopia portrays aspects of a community that is idealistic. However, the balance of good and bad portions creates a realistic, more attainable society.

Positives and Negatives of the Utopian Society. (2020, Jun 02). Retrieved from https://studymoose.com/positives-and-negatives-of-the-utopian-society-new-essay 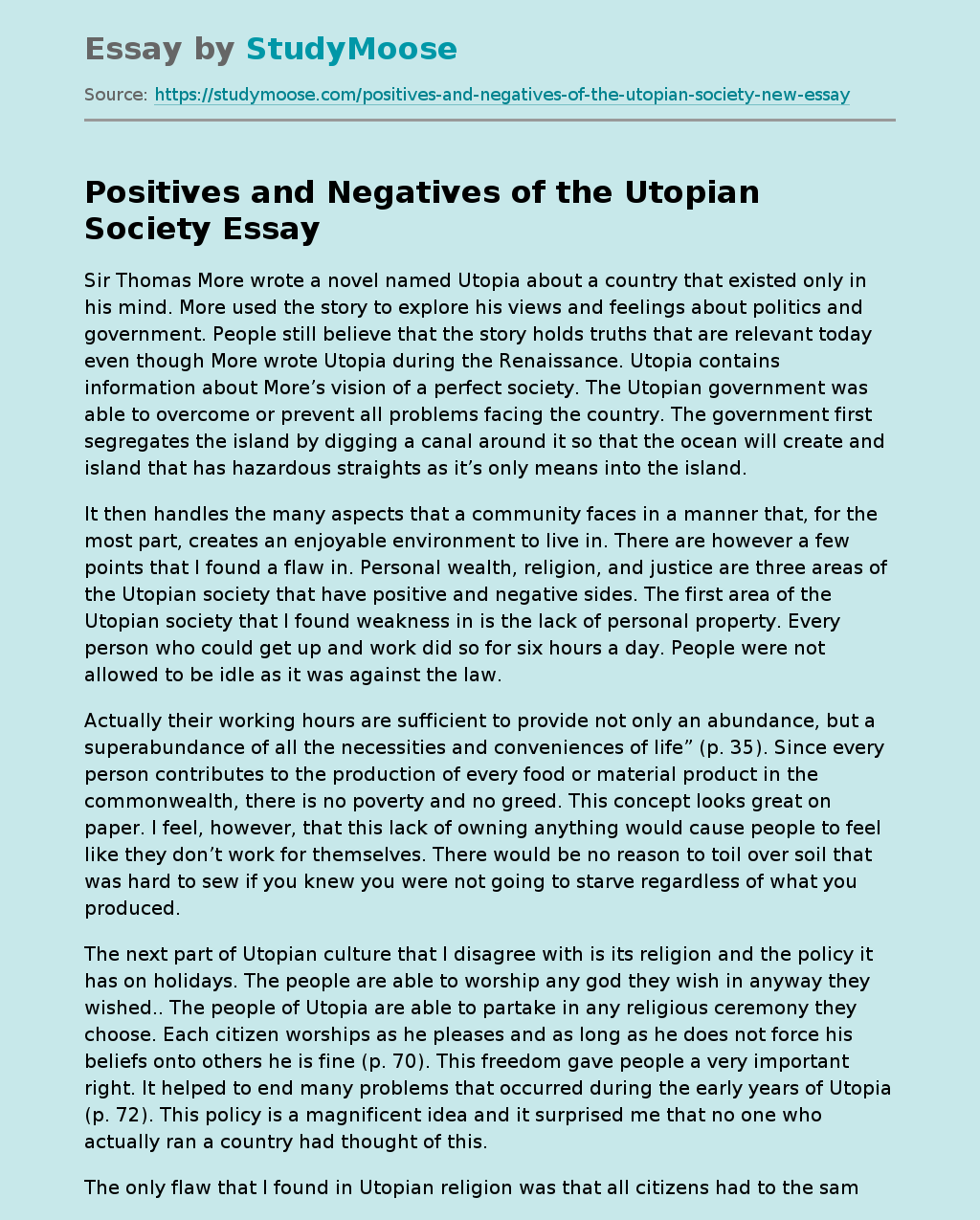