“Prue” is the main character of the story and is described by the narrator as a woman who aims to become the real person that she wants to be despite all the situations that she is actually involved with at present. Her understanding of her role as a woman is shown through the different experiences that she had to deal with in her life. It starts with her being divorced from her first husband with whom she bore children to.

Don't use plagiarized sources.
Get Your Custom Essay on Positive Thinking in Prue By Alice Munro Just from $13,9/Page

Her children I the story are already grown an are self sufficient, making her appear as a woman who is trying to suffice her own needs through working as a dining room hostess in Britain and currently a Toronto clerk.

She is a woman of good sense of humor who is able to handle life’s challenges in a much positive approach that makes her more extraordinary than other women of her age. Considering this particular fact, it is undeniable that she has carried on with her life issues with much positivism and strength in handling her dreams in balance with what she has at the moment.

Her involvement with Gordon, a man with a wife of his own though, gave her a rather unstable status with regards her emotional standing and her relationship with the said man. Considerably, such issues have not been shown by the character of Prue as something that is directly affecting her and her growth as a woman. Instead of actually being deeply involved, she then takes several souvenirs that are neither expensive nor too much worthless from the man that she adores and kept them in a tobacco tin where she kept other mementos from her past experiences and other people she met with in her life.

(a) Women are subjected to many challenges in life and as individuals; they have different approaches in facing such issues. For Prue, hiding her emotions was likely her process of facing life.

Complexities of the Story

Women are known for their capability of handling multiple tasks at the same time. Serving the people that they love and still being the person that they ought to be is one of the primary things that women are mostly concerned of. In the story of Prue though, the said characterization of women has been much focused on making a known identification of how women strive to become sufficient for themselves as they grow apart from their children to whom they owe responsibility. Understandably, such status in life makes the character of Prue rather shows a woman who is able to survive life through disregarding some of the basic things that she has to do like writing letters to her children so as to make a connection to them even though they have all grown and are already having a time of their own lives.

The author, Alice Munro actually presented the story with some explanations regarding the characterization of Prue missing within the plot of the story. Likely, this complication is not at all accidental. The author primarily wants the readers to fill themselves in, into the shoes of Prue and thus be able to realize the kind of person that she is in their own way of understanding. It is through this that the author could actually involve the personality of the readers within the character portrayed by Prue within the story.

The element of emotion has been casually omitted from the explanations of the different situations that Prue had to deal with as she trod the journey of her life. Munro has naturally made the story more complex in terms of explaining what is already obvious within the plot.

Furthermore, Munro used the different elements of womanhood to actually show the different issues that are involved with women dealing with the real situations in life that they are faced with. Relationships and responsibilities actually shape the personality of women all around the world. The description of Prue’s character in the story cold actually be noted to have a direct effect on the manner by which Alice Munro herself wants to help the readers understand the characterization of women altogether. She then aims to let the readers know that women are individuals who are in need of their own identity that separates them from the others.

Unlike an average woman of her own, it could also be noted that Prue’s character in the story point out an extraordinary individual who could use humor to cover up what she really feels about a certain situation that has been presented to her by life. Her involvement with Gordon has been treated by Prue as a worthwhile experience that has developed her growth and understanding of relationships. Although it has been so much complicated considering that Gordon has a wife and still undergoing divorce proceedings, she still managed to get the best out of such personal and intimate involvement with a man.

Prue’s character insists in presenting a kind of woman who is able to handle the difficulties in life with so much optimism in mind. It is through this particular process that the woman trying to grow within Prue’s personality began to reveal as the story progresses towards the end. Understandably, such an issue is presented through the ways by which she uses humor to hide her emotions.

It could be observed that through the establishment of the character of Prue in that particular state, she has become an epitome of a woman who tries to become the real person that she wants to be despite all the experiences that she has to face with in her life. The regularities of the different challenges that she meets with everyday, at work, with her relationship with her children, with her relationship with the man she adores, her character stands out to be someone who is able to control her emotions and still grow out of the fact that she feels pain inside her. She knows that all these events are a part of life that is supposed to make her grow towards the person that she aims to become.

Considerably, Prue’s character is presented as a regular individual who have had chances of dealing with their mistakes and their limitations in life with the use of optimism and supposed wisdom in understanding life as it presents a lot of challenges along the way. Through this, Prue’s character mirrors the capability of humans to use humor and optimist to survive life’s issues as they come every now and then.

Understandably, the different effects of relationships and emotional attachments as well as responsibilities upon the personal development of women could actually be understood through the narration of how Prue actually met with the different issues that she had to handle in her life as a woman, as a mother, as a worker and as a lover who wishes for nothing but the best for her and for those whom she loves. 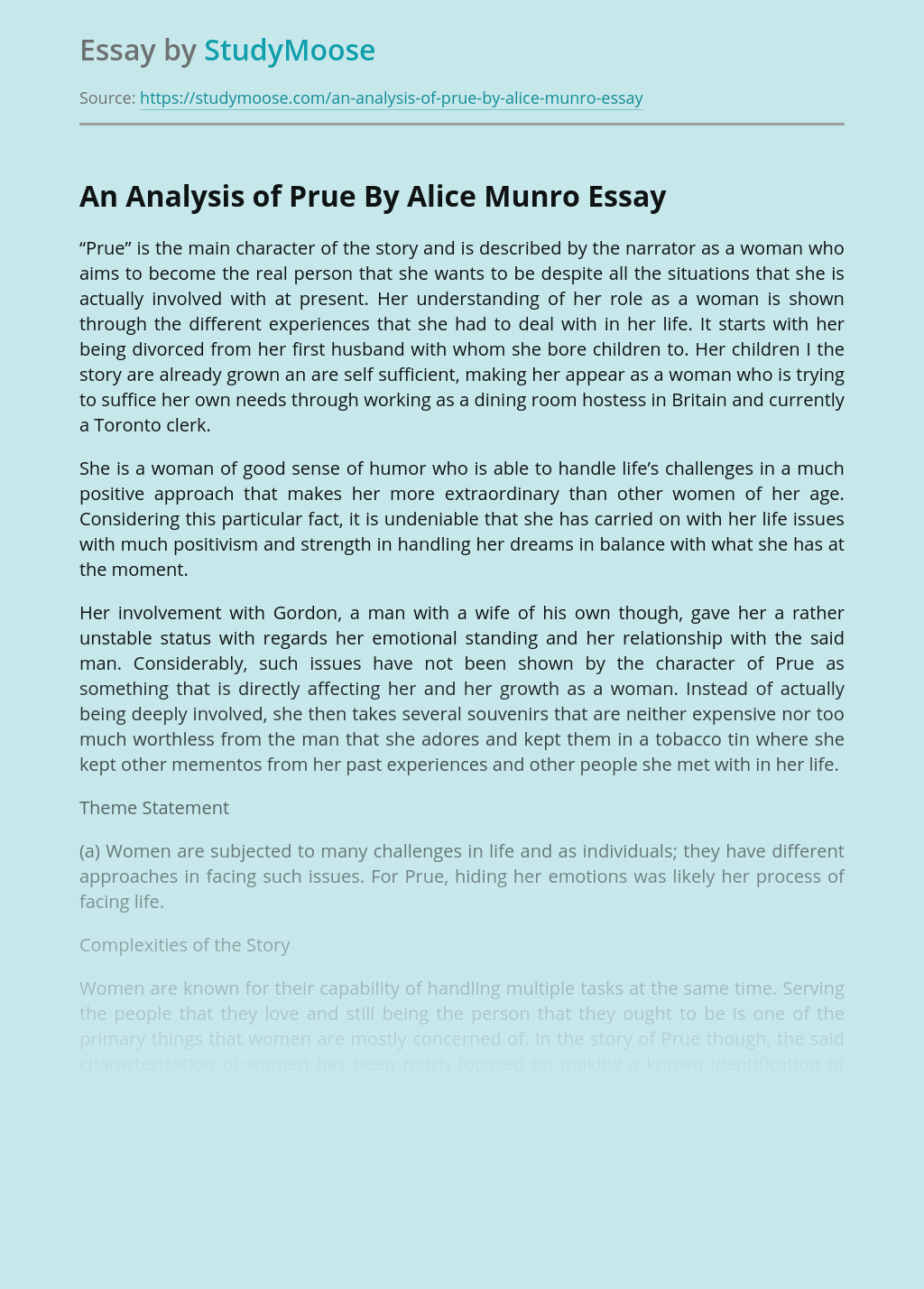 Poet and political activist John Milton after a period of radical political revolution, religious turmoil, and his near execution; published the twelve book edition of Paradise Lost, a poem describing the biblical text of Genesis filled with hidden political meaning. Paradise Lost enraged those who supported the restoration of Charles II, was praised by seekers...

1. As you like it is full of characters pretending to be someone other than themselves. To what degree are the characters aware that they are role-playing? Does their acting have serious consequences, or is it merely a game. In the text as you like it by William Shakespeare many characters have alter egos in...

Get Essay
Advantages and disadvantages of using internet anonymously

Internet freedom is a controversial issue nowadays, and there are some findings discovered that using internet without registered their real name will cause some critical problems as cyber bullying, stealing or intimidating since users do not need to have any responsibility about what they said. However, using internet anonymously are also some advantages which gives...

How is love presented in Pride and Prejudice

The theme of love is presented in Pride and Prejudice through three main ways; firstly through the personalities of the characters, for example whether the character in question believes that love should play a larger part in the coming together of two people than the possible benefits, like wealth or societal position. Secondly, how love...

Significant themes in Ethan Frome include silence, seclusion, impression, and the consequences that are the result of living according to the guidelines of society. Wharton depends on personal experiences to relate her thematic messages. Throughout her life as a writer, Wharton would arrange the time that she wrote around social engagements and she did not...