Positive Functions the Poor and Poverty Has on Society

There is a lot of positive functions poverty and the poor have on society. The existence of poverty makes sure that “dirty work” is done. “Dirty work” is classified as dangerous, physically dirty, temporary, undignified, a dead-end, underpaid, and menial jobs. In America, poverty functions to provide low-wage labor pools that makes people, willing or unwilling, to perform dirty work at lowest costs allowed. The poor subsidize tons of activities that benefit the wealthy. They have supported the consumption and investment or the private economy by virtue of the low wages they receive.

Don't use plagiarized sources.
Get Your Custom Essay on Positive Functions the Poor and Poverty Has on Society Just from $13,9/Page

Barry Schwartz pointed out, “the low income of the poor enables the rich to divert a higher proportion of their income to savings and investment, and thus to fuel economic growth. This, in turn, can produce higher incomes for everybody, including the poor, although it does not necessarily improve the position of the poor in the socioeconomic hierarchy, since the benefits of economic growth are distributed unequally. ” Poverty creates jobs to help serve the poor and shield them off from the rest of the population.

Activities flourish because of poverty; examples would be anything considered a “number game” like the sale of heroin, cheap liquors and wines, prostitutes, pawnshops, and a group called Peacetime Army (this group only enlists poor men). The poor buy foods and other items that other people do not want, for instance day-old bread, fruits and veggies that would be thrown out at grocery stores, second-hand clothing, and deteriorating cars and buildings. The poor also provide incomes for lawyers, teachers, doctors, and other people who are either too old, incompetent, or poorly trained to attract the more wealthy clients/patients.

There is a group of poor people called the “deserving poor”, these people are disabled or just have plain out bad luck. They provide the rest of the population with emotional satisfaction. They Induce compassion, charity and pity thus allowing the people who help them feel as though they are moral, practicing a religious ethic, and that they are philanthropic and generous. The “deserving poor” let those people feel fortunate for not having to deal with what they have to being struck within the poverty hole. Poverty also promises the status of the people who aren’t poor. In a stratified society, social mobility is an important goal.

People need to know where they stand in the level of classes; poverty functions as their reliable/permanent measurement tool for status comparison. To end this long list of positive functions poverty adds to society, I have one last thing – the poor have played a large role in the shaping of America’s political process. They vote and participate far less than other groups in the economic standings. The system is free to ignore the poverty-stricken because of this; this has not only made politics more reasonable and centrist but it has added more to the stability of the processes involved in the American politics.

Positive Functions the Poor and Poverty Has on Society. (2016, Oct 27). Retrieved from https://studymoose.com/positive-functions-the-poor-and-poverty-has-on-society-essay 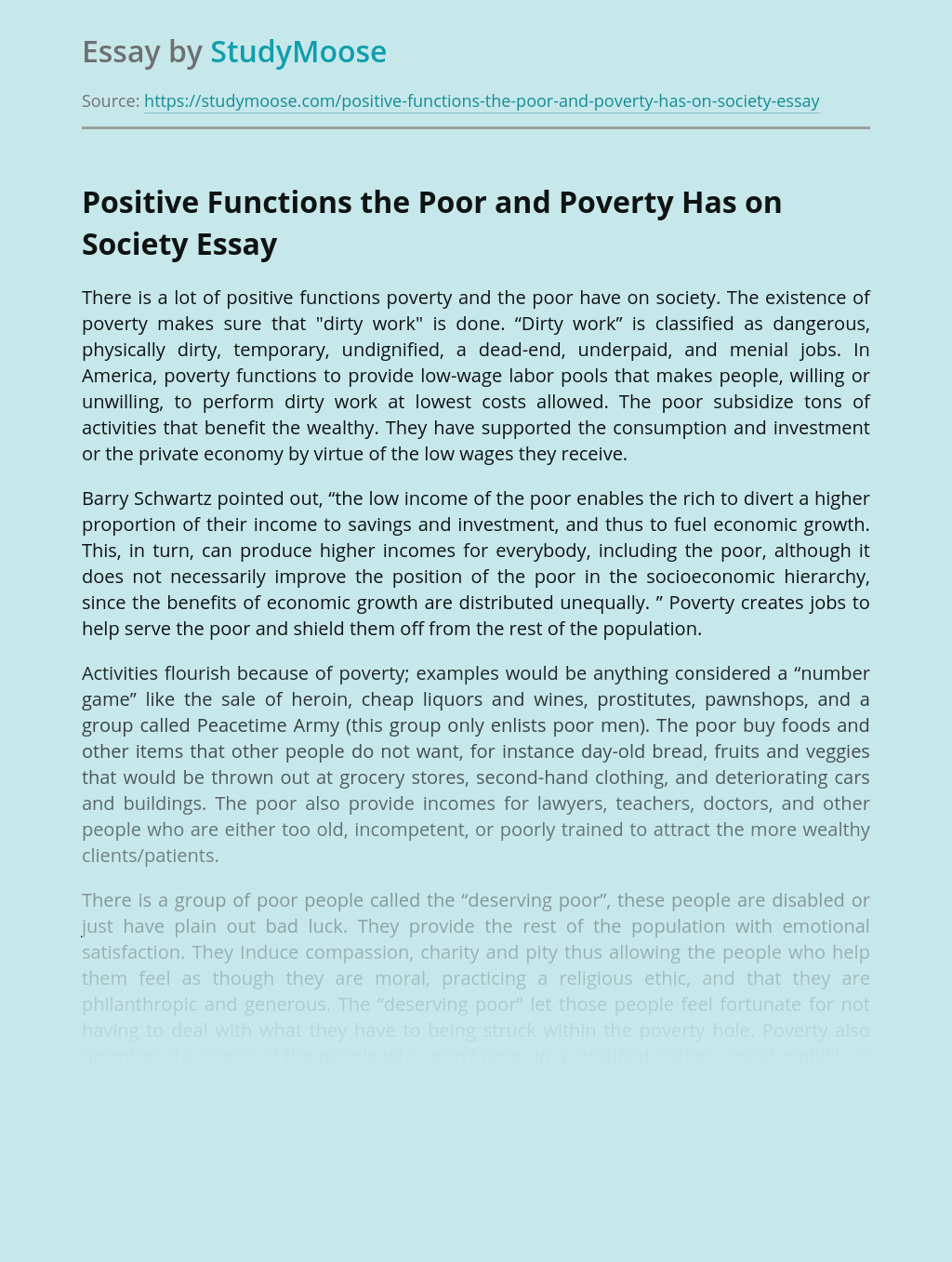 "I had been hungry all the years" by Emily Dickinson

The poem “I had actually been starving all the years” by Emily Dickinson checks out the persona’s modification of attitude towards food. This poem can be taken literally or metaphorically and I have actually chosen to understand it actually. From the beginning of the poem, the personality informs us that she (presuming the personality is...

The Lesson is considered by the Literary Canon to be a wonderful work of fiction since of its usage of language, humanistic style, meaning, and non-genre plot. 2 essential components that include to the depth and boost a reader’s comprehension of The Lesson are Bambara’s use of importance and style. The Lesson occurs in New...

Get Essay
Absolute and Relative Poverty

The article I chose for this assignment is titled Absolute and Relative poverty. The author talks about the difference between the two terms, likewise defining them as clearly as possible as if to ensure that the reader is clear about what the difference between being absolutely poor and being relatively poor. The World Bank Group...

My Father Goes to Court Author by Carlos Bulosan

My Father Goes to Court is just one of the many short stories in Carlos Bulosan’s “The Laughter of My Father” which was published in the 1940’s in the United States. It is the most popular one, I believe. He wrote this story based from folklore in the Philippines and it has an underlying social...

What Kind Of World Do You Want To Live

If we are able to create a world of our own we would that world with everything we like and erasing everything that we dislike. But that world could change based on our ages. So like every normal people I have my own world in my mind since I was little. Since my dream is...