Population/Migration Patterns of Mexico and Botswana

Botswana, located at 22.9906°S and 25.1557°E, is known to be the most advanced country in Africa, where poverty is common and at its worst. What makes this country covered, with a large wilderness and desert sand, a middle-income nation is its abundance of diamonds. Almost half of its economy is run off the selling of diamonds. It is the world’s number one diamond selling country, making Russia second. But with the Kalahari Desert covering most of Botswana, it is difficult for agriculture to exist but cattle.

Don't use plagiarized sources. Get your custom essay on
“ Population/Migration Patterns of Mexico and Botswana ”
Get custom paper
NEW! smart matching with writer

Botswana’s government is a multi-party democracy that makes it free of corruption. With little to no corruption in the government, there is a good human rights record. Botswana may be the best in Africa, but there is a different result when compared to the rest of the world.

Botswana only makes up of 0.3 percent out of the world population. In Botswana, there are 3.7 people per kilometer, but the physiological density, which is 463, is totally different. Botswana is mostly made up of desert which is not arable so the physiological density is much higher. Because Botswana is mostly made up of desert, there are barely any people who live in rural areas because most people live in the city where there are more resources, so the agriculture density of Botswana, which is 0.

Though Botswana is doing great economically and politically, it is still in stage two of the demographic transition model. There is a high C.D.R. and a high C.B.R. in Botswana which makes it site on stage two. Unlike stage one though, there are more people surviving in middle age. One factor that makes Botswana have a high C.D.R. is the diffusion of the AIDS virus. Botswana use to have the world’s highest rate of HIV-AIDS infection, but now, Botswana has one of Africa’s most advanced treatment programmers. But because of poor medical care in the past, one in three adults have HIV/AIDS. The virus then spreads to other adults, then to children, cutting life expectancy and killing thousands. Botswana has a high C.B.R. because there are still some people in Botswana that are Bushmen and live on traditional customs. People tend to have more boys than girls because of religion.

Right now, Judging from Botswana’s population pyramid, Botswana lies on stage two on the Demographic Transition Model. I can tell that it is very close to becoming a stage three country. Botswana’s C.B.R. has already been decreasing to the point where it is already in stage three. Even though Botswana is doing well politically and economically, there is a large gap between stage three and four According to predicted population pyramids of Botswana, its C.B.R. will decrease by the year and there will be more people surviving at older ages because of improved medical care which lowers C.D.R. The progress towards stage four for Botswana is at a slow pace but I predict that it will reach stage four on year 2070 by comparing the population pyramid of Botswana in 2070 to the population pyramid of the U.S. in 2015. They are similar in both shape and actual statistics.

Migration patterns of Botswana have changed since it gained its independence from Britain in 1966. Back then, Botswana was a country that had a lot of emigrants, people who leave the country. Now Botswana is a migrant receiving country or in other words, gets a lot of immigrants. It is known to attract talented people from Africa and to be a haven for refugees, asylum seekers, and anti-apartheid from South Africa. Just recently, there have been a large number of illegal immigrants crossing Botswana’s borders because of the economic crisis in neighboring country Zimbabwe. I think that Botswana will not put any harsh laws against illegal immigrants or refugees because of, as said above; Botswana has a good history of human rights. Botswana also has the economy and medical treatment to care for these refugees seeking help. Botswana’s Population Profile

Mexico, located at 19.0000°S and 99.0000°N, is one of the two countries that border the powerful nation, the United States of America. Though its economy mostly runs on oil that is mainly sold to the United States due to the short distance between them, Mexico has a very high poverty level. Mexico’s government has been dominated by the Institutional Revolutionary Party, or I.R.P., for 70 years. But there was a switch in power in the year 2,000 when Vicente Fox became the first president that is not from the I.R.P. Mexico will have to go through great change because of the changing of political parties. One major change that concerns leaders is the high poverty level. Many citizens of Mexico tend to cross the border to the United States to find a job and earn more money. They usually tend to migrate to the U.S. it illegally, making them illegal immigrants, because it’s quicker. Because of high poverty levels, there is also a high crime rate.

Mexico is made up of 1,942,945 square kilometers of land that make up arid deserts, high mountains, and thick, humid, rain forests. With Mexico having a large land mass there is also a large population of 114,975,406 people. Like Botswana, Mexico only makes up a small portion of the world population having about 1.6% of the world’s population. The Arithmetic Density of Mexico is 59.1 people per squared km. The Physiological Density of Mexico is 436 peoples per squared km of arable land. The Agricultural density of Mexico is 103.6 people who live in rural areas per square km of arable land. The agricultural density is fairly high because there are also Native Americans still living there. Also, Mexico isn’t covered in Desert like Botswana, so Mexico’s environment can sustain a rural background.

Though Botswana is doing better than Mexico is economic achievements and the welfare of the people, Mexico lies on stage 3 of the demographic transition model with decreased C.B.R. and decreased C.D.R. Mexico is slowly becoming more educated affecting the C.B.R. to decrease. Traditions are fading and the bias between boys over girls will soon disappear. With technological advances through health care, more people are surviving to live to an older age. Though there was medical improvement, the AIDS virus still kills thousands in Mexico because of the large spread in the past. The AIDS virus still seems to be incurable through a vaccine so there will still be a large death toll because of it.

Mexico is currently in stage three in the Demographic Transition Model. Its C.B.R. has been decreasing and C.D.R. has been decreasing. I think that Mexico will become a stage four country in the year 2040. I also think that Mexico could become a stage four country a lot faster if it weren’t for its economy, government, and its migration patterns. Because of the bad economy, many Mexicans cannot find a job with pay that can support their family. That’s why most citizens of Mexico from the middle ages are moving to the United States to find a job with good pay to support their family back at home, even if they cross the border illegally. This makes it difficult for human geographers to record the population of Mexico because so many Mexicans are in the United States.

Population/Migration Patterns of Mexico and Botswana. (2016, Nov 23). Retrieved from https://studymoose.com/populationmigration-patterns-of-mexico-and-botswana-essay 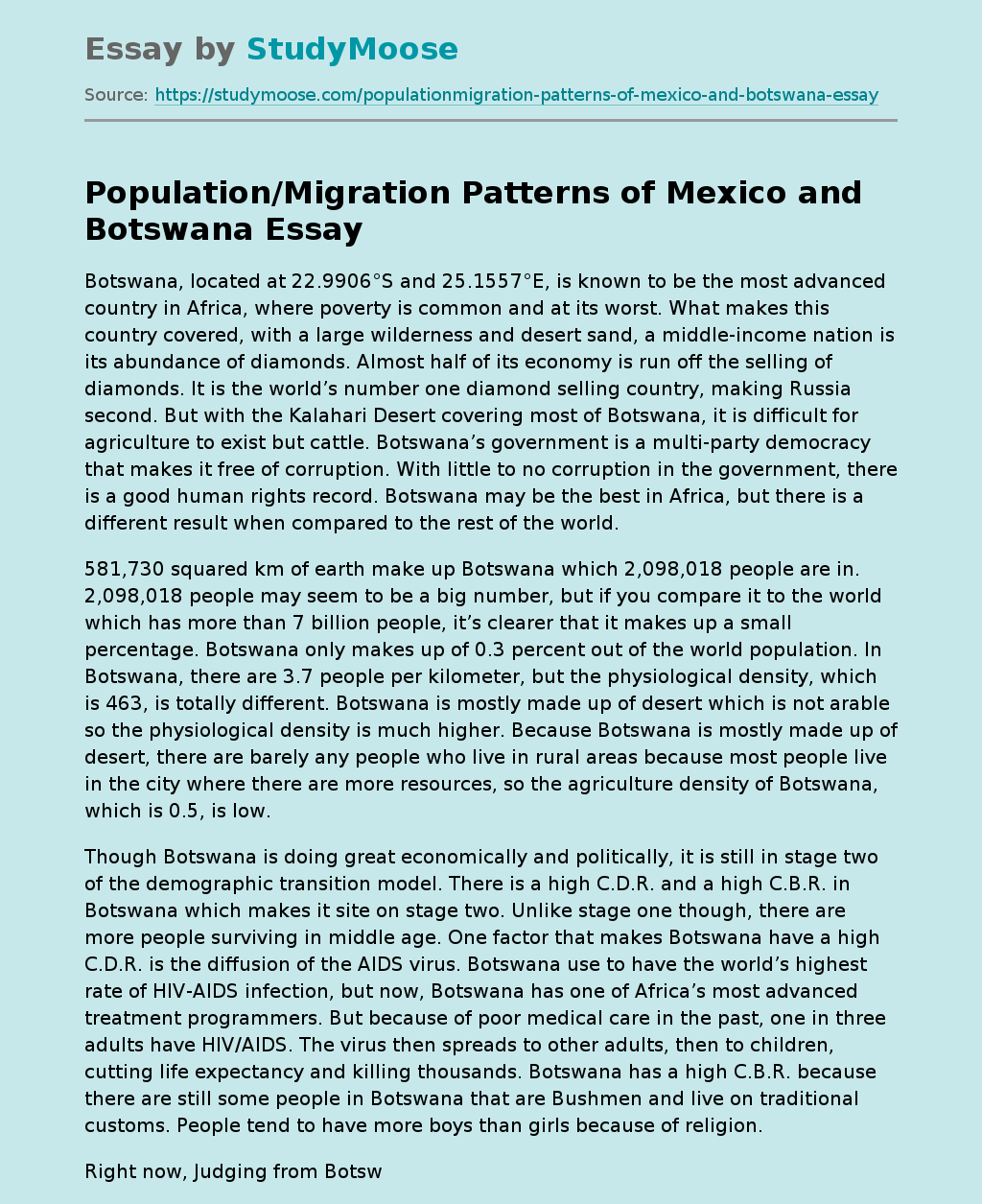