Population growth has long been a concern of the government, and India has a lengthy history of explicit population policy. In the 1950s, the government began, in a modest way, one of the earliest national, government-sponsored family planning efforts in the developing world. The annual population growth rate in the previous decade (1941 to 1951) had been below 1. 3 percent, and government planners optimistically believed that the population would continue to grow at roughly the same rate.

Implicitly, the government believed that India could repeat the experience of the developed nations where industrialization and a rise in the standard of living had been accompanied by a drop in the population growth rate.

Don't use plagiarized sources. Get your custom essay on
“ Population and Family Planning Policy in India ”
Get custom paper
NEW! smart matching with writer

In the 1950s, existing hospitals and health care facilities made birth control information available, but there was no aggressive effort to encourage the use of contraceptives and limitation of family size. By the late 1960s, many policy makers believed that the high rate of population growth was the greatest obstacle to economic development.

The government began a massive program to lower the birth rate from forty-one per 1,000 to a target of twenty to twenty-five per 1,000 by the mid-1970s. The National Population Policy adopted in 1976 reflected the growing consensus among policy makers that family planning would enjoy only limited success unless it was part of an integrated program aimed at improving the general welfare of the population. The policy makers assumed that excessive family size was part and parcel of poverty and had to be dealt with as integral to a general development strategy.

Education about the population problem became part of school curriculum under the Fifth Five-Year Plan (FY 1974-78). Cases of government-enforced sterilization made many question the propriety of state-sponsored birth control measures, however. During the 1980s, an increased number of family planning programs were implemented through the state governments with financial assistance from the central government. In rural areas, the programs were further extended through a network of primary health centers and subcenters.

By 1991, India had more than 150,000 public health facilities through which family planning programs were offered. Four special family planning projects were implemented under the Seventh Five-Year Plan (FY 1985-89). One was the All-India Hospitals Post-partum Programme at district- and subdistrict-level hospitals. Another program involved the reorganization of primary health care facilities in urban slum areas, while another project reserved a specified number of hospital beds for tubal ligature operations.

The final program called for the renovation or remodeling of intrauterine device (IUD) rooms in rural family welfare centers attached to primary health care facilities. Despite these developments in promoting family planning, the 1991 census results showed that India continued to have one of the most rapidly growing populations in the world. Between 1981 and 1991, the annual rate of population growth was estimated at about 2 percent. The crude birth rate in 1992 was thirty per 1,000, only a small change over the 1981 level of thirty-four per 1,000.

However, some demographers credit this slight lowering of the 1981-91 population growth rate to moderate successes of the family planning program. The heavy centralization of India’s family planning programs often prevents due consideration from being given to regional differences. Centralization is encouraged to a large extent by reliance on central government funding. As a result, many of the goals and assumptions of national population control programs do not correspond exactly with local attitudes toward birth control.

At the Jamkhed Project in Maharashtra, which has been in operation since the late 1970s and covers approximately 175 villages, the local project directors noted that it required three to four years of education through direct contact with a couple for the idea of family planning to gain acceptance. Such a timetable was not compatible with targets. However, much was learned about policy and practice from the Jamkhed Project.

The successful use of women’s clubs as a means of involving women in community-wide family planning activities impressed the state government to the degree that it set about organizing such clubs in every village in the state. The project also serves as a pilot to test ideas that the government wants to incorporate into its programs. Government medical staff members have been sent to Jamkhed for training, and the government has proposed that the project assume the task of selecting and training government health workers for an area of 2. million people. Another important family planning program is the Project for Community Action in Family Planning. Located in Karnataka, the project operates in 154 project villages and 255 control villages. All project villages are of sufficient size to have a health subcenter, although this advantage is offset by the fact that those villages are the most distant from the area’s primary health centers. As at Jamkhed, the project is much assisted by local voluntary groups, such as the women’s clubs.

The local voluntary groups either provide or secure sites suitable as distribution depots for condoms and birth control pills and also make arrangements for the operation of sterilization camps. Data provided by the Project for Community Action in Family Planning show that important achievements have been realized in the field of population control. By the mid-1980s, for example, 43 percent of couples were using family planning, a full 14 percent above the state average.

The project has significantly improved the status of women, involving them and empowering them to bring about change in their communities. This contribution is important because of the way in which the deeply entrenched inferior status of women in many communities in India negates official efforts to decrease the fertility rate. Studies have found that most couples in fact regard family planning positively. However, the common fertility pattern in India diverges from the two-child family that policy makers hold as ideal.

Women continue to marry young; in the mid-1990s, they average just over eighteen years of age at marriage. When women choose to be sterilized, financial inducements, although helpful, are not the principal incentives. On average, those accepting sterilization already have four living children, of whom two are sons. The strong preference for sons is a deeply held cultural ideal based on economic roots. Sons not only assist with farm labor as they are growing up (as do daughters) but they provide labor in times of illness and unemployment and serve as their parents’ only security in old age.

Surveys done by the New Delhi Operations Research Group in 1991 indicated that as many as 72 percent of rural parents continue to have children until at least two sons are born; the preference for more than one son among urban parents was tabulated at 53 percent. Once these goals have been achieved, birth control may be used or, especially in agricultural areas, it may not if additional child labor, later adult labor for the family, is deemed desirable. A significant result of this eagerness for sons is that the Indian population has a deficiency of females.

Slightly higher female infant mortality rates (seventy-nine per 1,000 versus seventy-eight per 1,000 for males) can be attributed to poor health care, abortions of female fetuses, and female infanticide. Human rights activists have estimated that there are at least 10,000 cases of female infanticide annually throughout India. The cost of theoretically illegal dowries and the loss of daughters to their in-laws’ families are further disincentives for some parents to have daughters.

Sons, of course continue to carry on the family line The 1991 census revealed that the national sex ratio had declined from 934 females to 1,000 males in 1981 to 927 to 1,000 in 1991. In only one state–Kerala, a state with low fertility and mortality rates and the nation’s highest literacy–did females exceed males. The census found, however, that female life expectancy at birth had for the first time exceeded that for males. India’s high infant mortality and elevated mortality in early childhood remain significant stumbling blocks to population control. 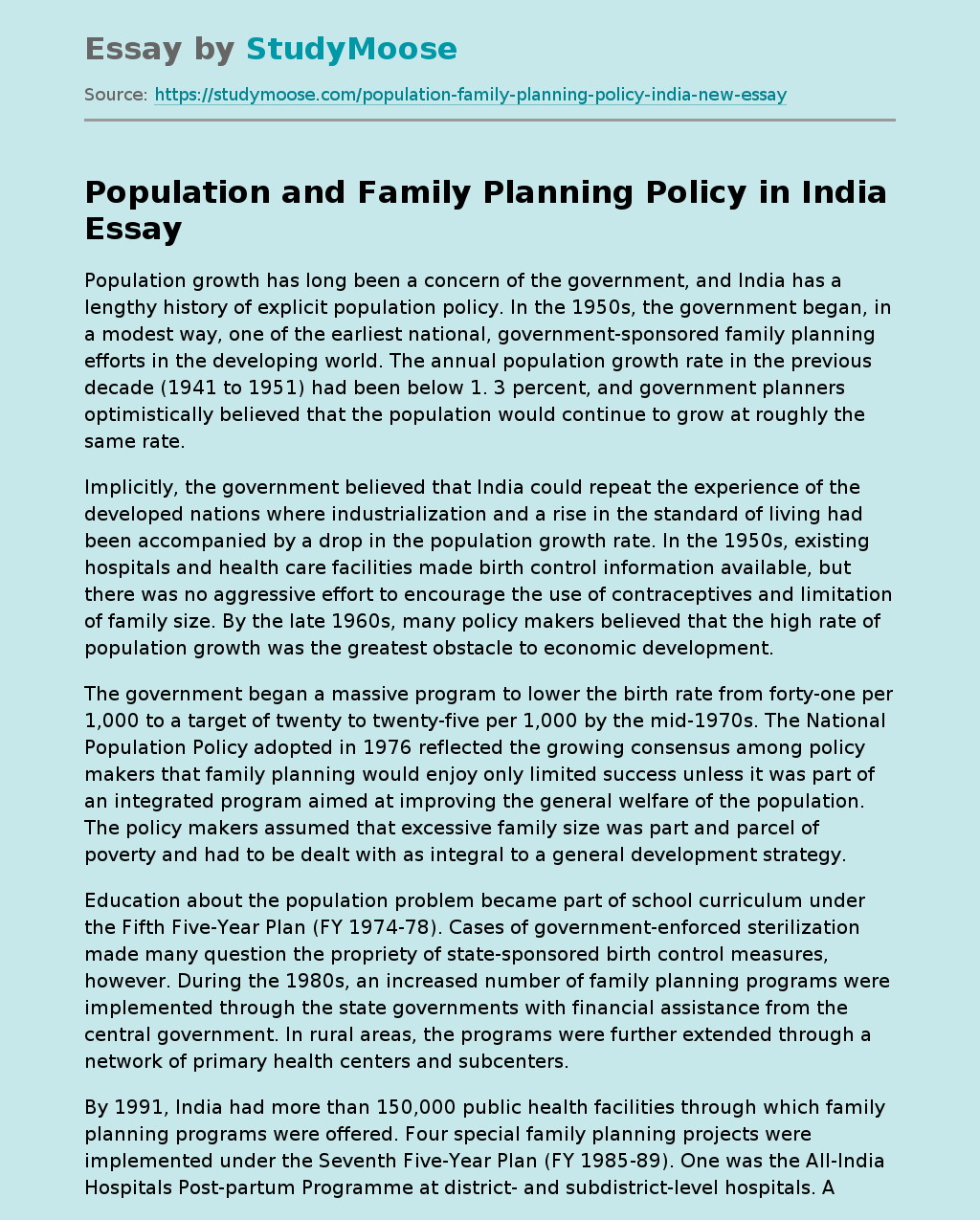