Popularity of Soccer Around the World

I am going to talk about the most popular sport in the world: football. Now, you may be having visions of huge quarterbacks, dressed up in their padding and helmets, parading down the field during the Super Bowl. But the other kind of football, the football the rest of the world knows, has no padding or helmets. This other football is known in America as soccer. In more than 180 countries across the globe, football, or soccer, rates as the number 1 national sport.

Don't use plagiarized sources. Get your custom essay on
“ Popularity of Soccer Around the World ”
Get custom paper
NEW! smart matching with writer

Even those games which took local root and flourished distinctively(for example, American or Australian football) didn’t gain as much popularity as football did. Not even a bit. ‘No, other sporting event-not even- the Olympics attracts such colossal audiences as footballs world cup.

The language, folk-memory, heroes, and stars of this remarkable game are universal, serving to unite (and periodically to divide) millions of people who would otherwise have little in common. Football dates back as far as thousands of years ago.

Even though there are some arguments on who started football its England who transitioned football. There are records that show that ancient civilizations of Greece, Egypt, and China (among others) played an age-old form of football with a stuffed leather ball. Early games in Old England were like mob riots. There were no rules; it was anything goes! The games were so rowdy and violent that many English rulers tried to outlaw them. But it didn’t t work. In fact, English travelers took the game with them, spreading it all around the globe.

But there needed to be rules. In 1863 the Football Association was formed, or FA, in England. They developed the first real set of rules for modern soccer, or football, as we know it. And actually, the word soccer came from their name, specifically from the word Assoc.

By 1900 football teams from all different countries were playing against each other, and there was a need for a common set of rules. In 1904 the Federation Internationale de Football Association, or more commonly known as FIFA, was formed. They proposed one set of rules for all countries in the world to follow. At first there were only 7 countries that members of FIFA, but today almost every country in the world recognizes them. In the present there are more than 2 million players registered with official football organizations, and about 275, 000 clubs play in official leagues and tournaments. Headquartered in ZГјrich, it’s membership now comprises 211 national associations. Member countries must each also be members of one of the six regional confederations into which the world is divided: Africa, Asia, Europe, North & Central America and the Caribbean, Oceania, and South America. The World Cup, held every four years, is the highlight of football tournaments. Held by FIFA (of course), it lasts 1 month, and on this month, the world s eyes are on the World Cup.

In 1994, over 1 billion people watched the World Cup, and the events leading up to it. The fans are everything to football. The pride of their city or country equals the pride of their football team. A football game is not about sitting and quietly watching the game while eating hotdogs and peanuts it is a wild fiasco! The fans dress up in costumes and their team colors, they paint their faces and bodies and sing songs in unison about their team. The stadiums are gigantic and chaotic. The MaracanГЈ Stadium in Brazil is usually filled up to it’s capacity with 220, 000 screaming fans.

Once, many Brazilian fans fainted in the stands when they lost to Uruguay. The popularity of this sport also has it’s downsides. It has even been deadly. For instance, in 1969 the qualifying games between El Salvador and Honduras caused a war between the 2 countries. There had been conflict between the countries, but things boiled over when they clashed on the playing field, sparking a full-scale war that lasted 2 weeks. In 1989 the infamous Hillsborough Tragedy occurred when excited fans caused themselves to be crushed to death. 98 Liverpool fans were killed, many children. As late as 1996 a stampede broke out in a Guatemalan stadium that killed at least 78 fans. Most victims died of smothering, and many of the injured had broken bones.

The football players themselves are also worshipped, but this idolization has proved to be deadly. A Colombian player named Escobar was killed after he cost his team the game by making a goal in the opposite teams net. But whether positive or not, football, or soccer (as Americans know it), will continue to be the world’s most popular sport. The chief reason for this vast popularity is that it has proved to be the most accessible and adaptable of all sports.

From children playing in village streets, to professional players in the world s biggest stadiums, from children to adults and from men to women, football is truly the most popular sport on earth. Hopefully one day America will fall in love with this other football, and she will join the rest of the world in the awesome Pandemonium, or as Americans know it, soccer.

Popularity of Soccer Around the World. (2020, May 23). Retrieved from https://studymoose.com/popularity-of-soccer-around-the-world-essay 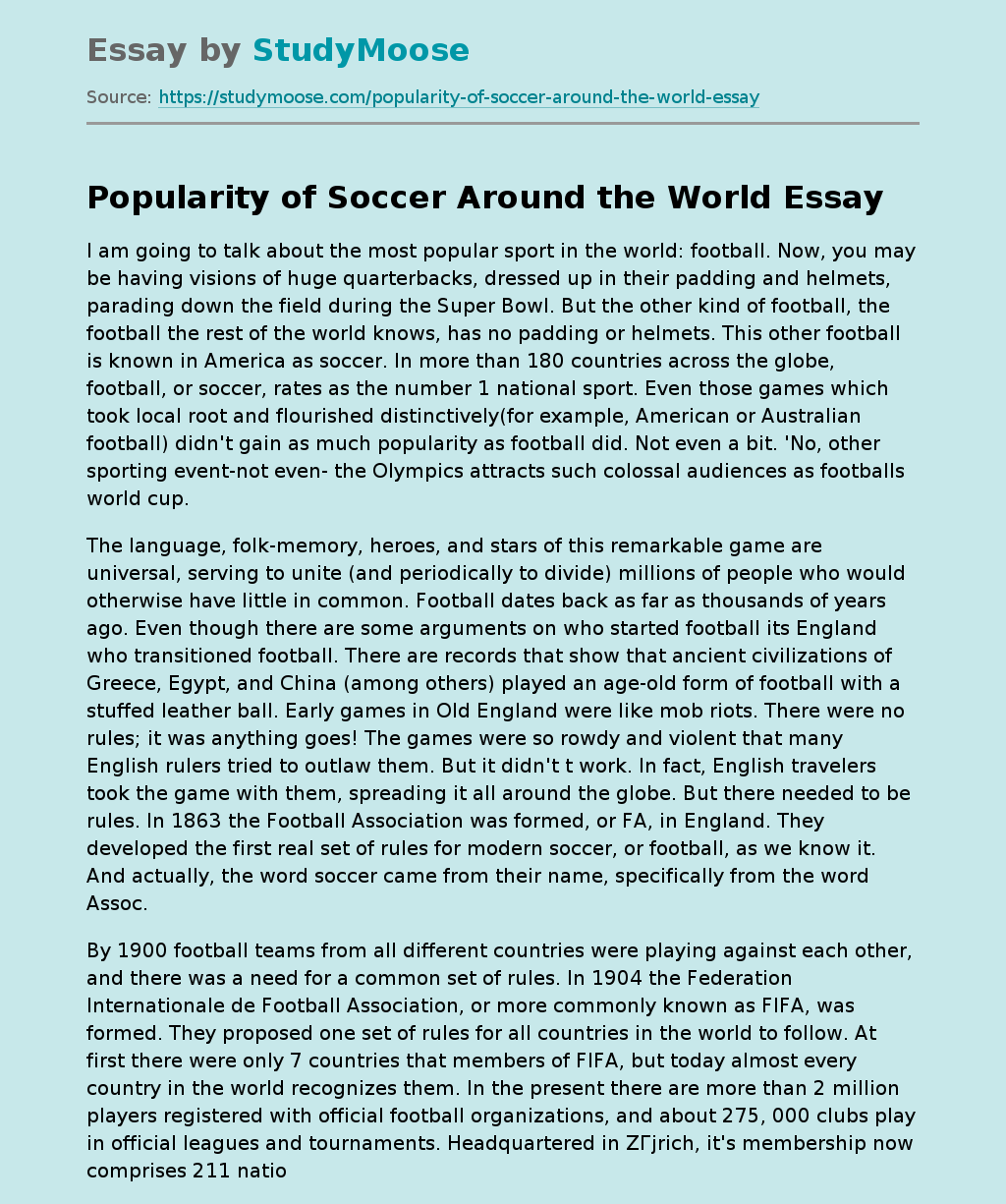