Madonna has been a very influential female “popstar” over the last 20 years: to sell her music she has publicised herself through the media, and through this media she has stuck to the concept that “sex does sell”.

Madonna was born on the 16th of August 1958 as Louise Veronica Ciccone, in Bay City, Michigan. She began her journey into the most influential industry and medium by moving to New York to become a ballerina. From this young age she was very aware of the human body and the way it is perceived.

Don't use plagiarized sources. Get your custom essay on
“ Popstar Madonna ”
Get custom paper
NEW! smart matching with writer

She knew that the body needed to be sold in some way, to ‘make it’ in these types of industries. At this stage of her life she became anorexic in an attempt to become the “stereotypical” ballerina figure.

Louise eventually left her ballerina days, and turned to music. She was part of the Patrick Hernandez Revel, The Breakfast club and Emmy: dance and pop groups that didn’t make it to the top.

It was through these small groups that she was scouted as a solo artist and in 1982 Louise was signed to Sire Records, under the performance name “Madonna”.

By the end of 1982 she released her debut single “Everybody”, which became an instant hit. This was the start of Madonna’s influential music career. Madonna debuted as a young, innocent, Christian girl, with strong morals and values. However, this changed as she began to transform herself and her image to attract a larger audience.

She began her career with the stage name Madonna, which she has kept throughout her long career.

The word “Madonna” is from the bible, a biblical name for the mother of Jesus (or Virgin Mary), and is a biblical character that is associated with purity and religion.

This is a paradox in itself – she is the complete opposite of her own name. By using and exploiting her sexuality, with the use of pictures, music, lyrics, and books, her image is almost always associated with the word sex. Through Madonna’s music we see that sexuality plays a large role in many aspects: the context, the names of albums and the lyrics. Examples of these are from her second album “like a Virgin” which was less poppier than the first but sultrier and sexier, focussing on sexual issues.

Her fourth album “Erotica” seemed to continue with this theme, which was one of her most sex-orientated albums.

So how has Madonna used her sexual powers to influence the music industry?

She is symbolic for women in our generation, as she is the first female pop star to have such an enormous following, and she broke the conventions of the usual 80’s popstar. Madonna seemed to give pop a new dimension, and made the genre and the industry more female orientated. In the 1990’s Madonna was the highest paying female artist in the pop music industry, which was highly dominated by men in the 1980s, such as Prince and George Michael.

With each album she seems to reinvent herself, and every second album seems to be sexually orientated, like she is somewhat taking a break in selling “sex”. Examples of this trend are within her first few albums. She firstly released “Madonna”, a very fun and youthful dance/pop album, which was the album that had such hits as “Holiday” and “Everybody”.

To compare how Madonna changed her image and music from her initial hits to her later singles, here are some lyrics from “Holiday”, from her first album:

If we took a holiday

Took some time to celebrate

Just one day out of life

It would be, it would be so nice

These lyrics are a contrast to those from her second album Like a Virgin; they show a shift from innocence to sexual connotations:

Touched for the very first time

When your heart beats (after first time, “With your heartbeat”)

With these transitions throughout her albums we are shown a different Madonna, exploiting sex in different ways.

In the 1990’s people started to react to Madonna’s use of sexuality through her music and video clips. Her video clip “Justify My Love” was banned by MTV due to its “overall tone of sexuality”. Also in her video clip “Vogue” she was placed in a see through shirt. Many people were outraged that this clip was not censored.

Change her name to Esther?

In 1986 Nude black and white photos were published in Playboy and Penthouse magazines. These were from the early 1980’s when she posed for art photographers to make money. However, Madonna further outraged the public by saying “So what?” to the fact these pictures were published. She announced that she was happy and proud of her image, and was not shy about her sexuality.

Saying so what to these pictures being published. Notice many biblical references such as virgin, prayer-opposite to what she represents.

Like a prayer; Religious imagery- where she compared love making to praying. The video was denounced by the Vatican. As Blasphemous’ + burning crosses.

Just like a prayer, your voice can take me there

Just like a muse to me, you are a mystery

Just like a dream, you are not what you seem

Just like a prayer, no choice your voice can take me there

In 1998 she seemed to change her style and reinvented herself once again with the release of ray of light: seemed to show a change in perspective and her songs were now bout motherhood and the lose of her mother.

American life was a flop dealt with more contempory issues such as the war and September 11,

Sex does sell, she learnt that by incorporating sexuality and sex into her music – so she could sell her album, she performed this by her kiss with Brittany spears last year in which boosted her back into the media and outraged critics but still boosted her otherwise but flopping album sales. 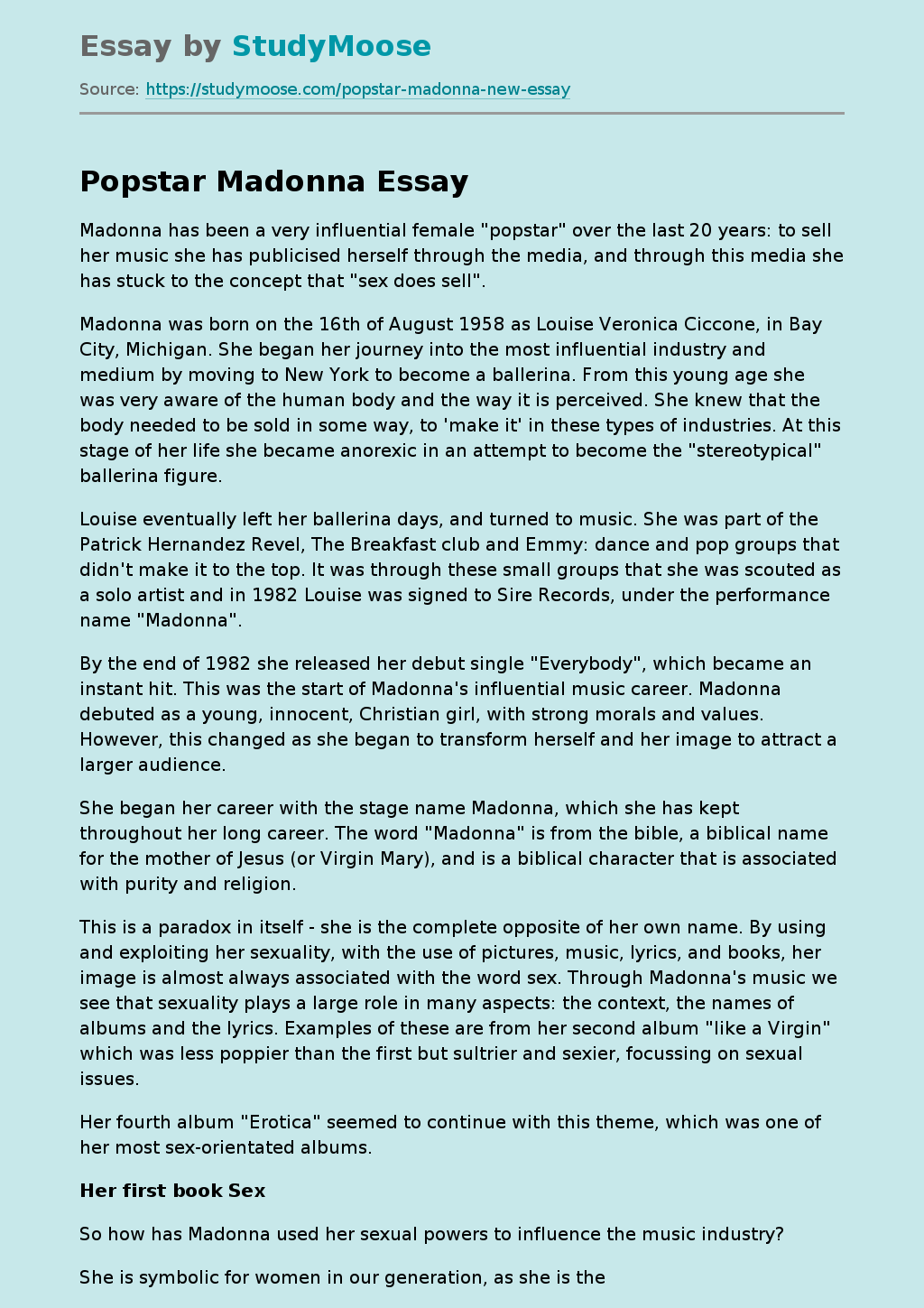