Politics in the Gilded Age

The politics of the Gilded Age failed to deal with the critical social and economical issues of the times. It was the era filled with forgotten presidents and politicians who ignored the problems erupting in the cites. Monopolies ruled over all the aspects of life, and the greedy men who ruled these monopolies caused poverty throughout the nation. The ideas of limited government caused the political parties to not take a stand on important issues. The “wonderful” Gilded Age in fact was not a pretty sight.

Don't use plagiarized sources. Get your custom essay on
“ Politics in the Gilded Age ”
Get custom paper
NEW! smart matching with writer

The Gilded Age was a time of inventions and reform, resulting in large numbers of immigrants and huge cities filled with skyscrapers. Men such as Thomas Edison, inventor of the light bulb, and Alexander Graham Bell, inventor of the telephone, gave the nation a modern taste. Whereas people before the Civil War had to use candles and fires for light and write letters that had to be carried on horseback, people during the Gilded Age could have light with the flip of a switch and could communicate to others in seconds.

With this wave of inventions came a wave of immigrants. These “new” immigrants came from southern and eastern Europe and were mainly Italians, Greeks, and Russians (Newman and Schmalbach 359). Soon efforts to restrict immigration arose.

Groups and organizations such as labor unions, which feared that employers would use immigrants to depress wages and break strikes, and the Social Darwinists, who viewed the immigrants as inferior beings, sought to help in the struggle against immigrants Newman and Schmalbach 361).

Immigrants moved to the cities where jobs were available and where luxuries such as running water, electricity, and cars were available at low costs. New reforms came about such as the Social and Reform Darwinists. The Social Darwinists believed in the survival of the fittest and loathed government intervention in anything, but the Reform Darwinists believed that man is inherently good and that the government should be involved in everything. With all of these new inventions and ideas came laziness and corruption “Y a part in which the government played a major role.

The United States government did little to help assuage the working class when monopolies ruled with complete control. These monopolies were run by robber barons, the nation’s most greedy and demanding people when it comes to industry. The government “proposes to sacrifice our homes, lives, and children on the altar of mammon; to destroy the multitude in order to secure corruption funds from the millionaires (Populist Party Platform). Children were made to work in dangerous conditions for many hours a day in factories. According to a cartoon in the Collections of the Library of Congress, the monopolies were the bosses of the senate and the senate is “of the monopolists, by the monopolists, and for the monopolists.” For many years, these monopolies would trample, invade, and pervert the rights of their workers (Gompers).

The government only laid back and watched its people suffer at the hands of monopolies. Before the Gilded Age, boys were expected to all there is to know about a trade. But during the Gilded Age, they were just put at a machine, not knowing how to do anything else except run that machine. “These were the principles reasons given by employers as to why the law had become inoperative (Third Annual Report of the Factory Inspectors of the State of New York for the Year Ending December 1st, 1888).” When asked about the conditions of the working people in an interview, Timothy Stow replied, “Because of their long hours of indoor labor and their hard work they . . . become physically weak.” The government had nothing to do with the workforce, but left it up to the powerful monopolies that worked their employees to death and pushed for more and more efficiency. This reflected their laissez fair attitude and social Darwinism, which played important roles in the political parties’ campaign strategies.

The closeness of the elections between 1876 and 1892 caused the Republicans and Democrats to avoid taking strong positions on issues. This idea of “do little” government was in tune with laissez fair economics and Social Darwinism (Newman and Schmalbach 380). Supporters of this theory explained that if the government does not interfere, the strongest businesses would prevail and bring wealth to the nation as a whole. To keep the laissez-faire policy active, businesses often contributed to friendly politicians, both legally and illegally with contributions of money. The spoils system was widely used to elect government officials who were supporters of such businesses (Newman and Schmalbach 381).

Under the spoils system, those who were elected in public office were free to appoint friends or supporters to government jobs, regardless of their qualifications. This system led to extensive corruption and lethargy among politics and business (Gilded Age). The political parties tried to avoid major issues, such as the problems with women’s suffrage and monopolies, because they were too “complex” for the common people and they did not want to alienate them (Politics in the Gilded Age). This seemingly endless laziness and corruption hurt society and eventually caused a depression.

The Depression of 1893 was caused by the unwillingness of the government to participate in social and economic issues. The federal government pursued a monetary policy that contracted the amount of money in circulation, making money scarcer and thus driving up its purchasing power and worth over time (“Agricultural Problems and Gilded Age Politics”). This was done by limiting currency to gold rather than by silver or paper money. This hard money policy the government pursued worked a real privation on debtors such as farmers. Not only did they have to repay interest on debt but had to do so with dollars that were increasingly harder to come by and that had greater purchasing power than those they had originally borrowed.

Farmers, who were constantly in debt because of the nature of agriculture and its problems during this era, “found themselves caught in this double bind year after year (Agricultural Problems and Gilded Age Politics).” James Bryce declared that this was “a neglect of details of politics such as had never been seen before.” With all of these problems concerning currency came the Depression of 1893, which lasted four years. The stock market crashed because of overspeculation and numerous railroads went out of business because of overbuilding (Newman and Schmalbach 387). President Grover Cleveland, not helping at all, met this problem by adopting a hands-off policy toward the economy. The government’s reluctance to listen to the complaints of the nation caused the Depression of 1893.

The politics of the Gilded Age failed to deal with the critical social and economical issues of the times. Monopolies ruled over all the aspects of life, and the greedy men who ruled these monopolies caused poverty throughout the nation. The government officials did nothing to aid the problems of the society and economy, but watched the nation suffer as they enjoyed the benefits of being an officeholder in the United States government.

Politics in the Gilded Age. (2016, Jun 28). Retrieved from https://studymoose.com/politics-in-the-gilded-age-essay 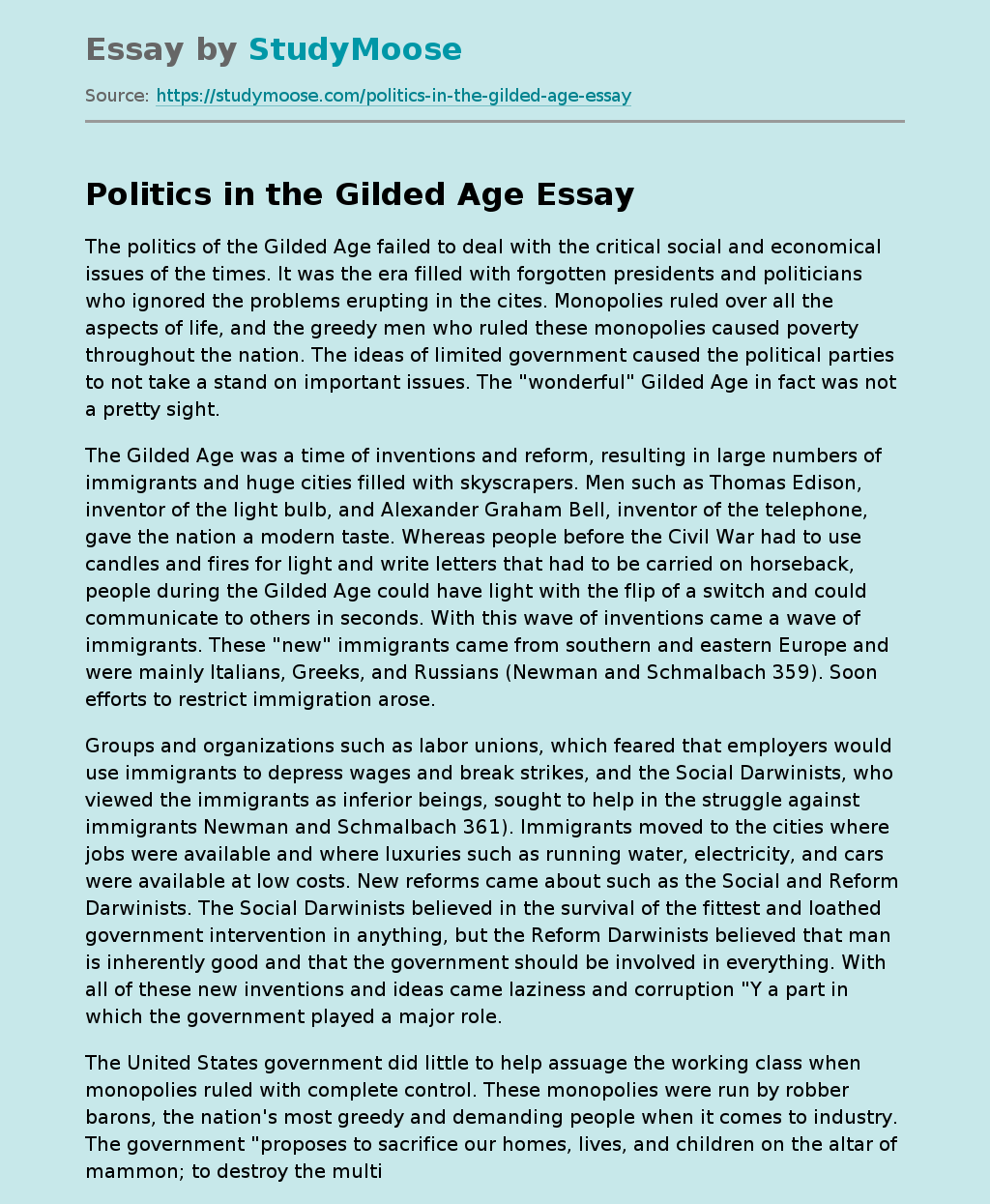