Following the Geneva conference in1954, an agreement was signed to end the First Indochina war. The agreements also lead to the temporary division of the Democratic of Vietnam into two sub- countries separated along the Laotian border next to the 17th parallel. To the north was the Democratic Republic of Vietnam and its capital in Hanoi and to the south was the Republic of Vietnam and its capital was in Saigon. The leader of the north was Ho Chi Minh and the south was lead by Ngo Dihn Diem.

The two leaders possess different skills and ideologies, however with the common target of uniting Vietnam, leading it to freedom. In this paper, an evaluation of the two leaders basing on the context of the Vietnam society will be made, about their leadership styles that lead them to win the hearts and minds of their subjects and consequently support for their initiatives (Schandler, 2009). Ho Chi Minh is a political genius. He fools the people of Vietnam to support his cause through propaganda, terror and betraying even his close friends to form the Communist movement in Vietnam.

He even tricks the patriotic solders and makes them to rebel, thinking that they are doing it for the benefit of Vietnam. A good example is the Hue Massacre in 1968. They seize the city of central Vietnam, killing thousands of innocent people, due to them inhabiting the southern Vietnam (Moss, 1990). Even though he commits all these, he is capable of creating good impression to the people of Vietnam and the whole world at large.

He manages to mobilize the people in the west through his propagandas. As a result, the person protests the south and praised the north. They are not able to discover his ill motives, but mistook him as good leader with good morals vision (Catino, 2010). He is deceptive and canning. He always wore a smiley face that could easily deceive the masses to think that he has the interest of Vietnam in his mind. He even insinuates that is major aim is to free the people of Vietnam from the colonial chains of The French. However, his only major aim is to liberate the nation and leads it to prosperity and development. In 1945, when he returns to Vietnam, he is chosen to lead Viet Minh.

Here he convinces many of the leaders by claiming that it is the revolutionary group whose intention is to end the French invaders. He has massive support, and when they win the French at Dien Binh in 1954, Ho Chi Minh is accorded all the praises and seen as a hero (Catino, 2010). Ngo Dinh Diem portrays himself as an honest and courageous leader. He shows his prowess in blocking the French from dominating his homeland. Ngo is equipped with genuine liabilities and his political base is developed through his own family that has high esteem and reputation (Moss, 1990). Also, Ngo Dinh Diem having stayed in the US, has gained him personality and experience from the influential politicians and reputable church leaders like senator Mike Mansfield and the cardinal of catholic church by the name Francis Spellman. This has made him the prime minister and also enjoys the massive support from the Vietnamese people (Moss, 1990). Ngo Dinh Diem is a determined and hardworking leader. He is very much focused in closely working with The United States military to in building the Republic of Vietnam Armed Forces. The chief reason for this is to create a strong defense at the northern border, against the inversion North Vietnamese.

Initiating the creation of Military Assistance Command, Vietnam (MACV) in 1963 and also providing the United States for the South Vietnamese is a good indication of his effort and hard work (Moss, 1990). Although he is challenged with the political instability, his determination won the hearts of many people in not only the Southern Vietnam and the entire Vietnam community. Personal leadership was a major factor in reuniting the country following the war. Ngo Dinh Diem and Ho Chi Minh were able to achieve growth and transformational processes as indicated by the conscious decisions they made in uniting the country (Schandler, 2009). Through personal change the leaders played a major role in developing and ensuring an enlightened life that was more meaningful, full of self-awareness, purpose-driven as well as being socially responsible.

Overall the leaders embraced vital lessons of personal leadership, which inspired the people to have deep reflection and indoctrination of positive aspects into everyday lives. The personal leadership had positive transformation of the Vietnamese society and had positive implications on the world around (Moss, 1990). It is clear from the discussion above that various skills and ideologies of the two discussed leaders contributed greatly to the reunion of Vietnam. Though their policies differed, their creativity and diligent leadership styles won the hearts of Vietnamese people, and the entire Continent of Asia. The Vietnamese embraced their leadership and consequently support for their leadership initiatives. They maintained political stability and achieved their dream of uniting the people of Vietnam (Catino, 2010). 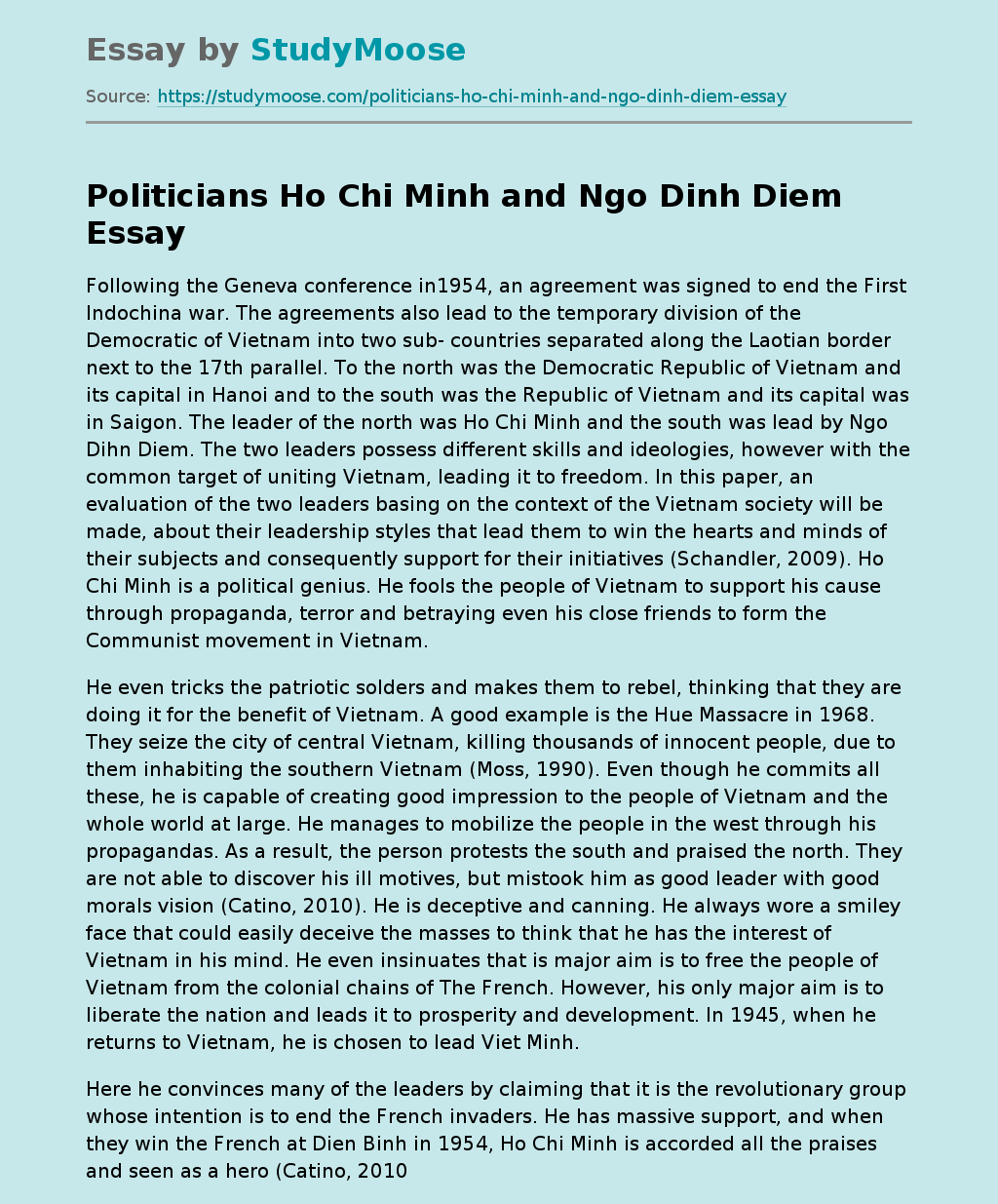