Have you ever thought about why you have the political beliefs and values you do? Where did they come from? Are they simply your own ideas and experiences or have you been influenced by others in your thinking? This process by which individuals acquire their political beliefs and attitudes is called political socialization. In another words, Political socialization is a concept where the study of the developmental processes by which children and adolescents acquire political cognition, attitudes and behaviors. What people think and how they come to think it is of critical importance to the stability of the government.

Don't use plagiarized sources.
Get Your Custom Essay on Political Socialization Just from $13,9/Page

The beliefs and values of the people are the basis for a society’s political culture and that culture defines the parameters of political life and governments? action. There are many agents that influence in one degree or another individual’s political socialization. Factors such as: family, friends, teachers, media, religion, race, gender, age and geography all influence us in one way or another during our childhood years.

By now you should know that most political opinions are formed during childhood and many political ideas are passed down from parents to their children through them expressing their beliefs.

When I was growing up I formed many opinions and attitudes due to the fact my parents were feeling that way. Growing up during in early/mid 1990? s in Bosnia wasn? t easy. With a country in a full scale war people were looking for help. A country that just few years earlier hosted and showed the world a great Winter Olympic Games was in need of help, but no one answered. People started forming their own opinions and theories about the world that has turned their back on them, including my parents. There was very limited access of what was happening in the world available to the people.

I can clearly remember trying to figure out what is happening on my own and listening to my parents and trying to form something out of it. I lived in Sarajevo, where it was impossible to get in or out the city for the first year or so. Even with the United Nations present in the city I always asked myself why don? t they end this? To this day, questions always reappear in my mind about the international polices and innerving in a war when so many people are dying. How many lives does it take before the world powers and the most honored world governments sit down and a peace treaty is signed?

For me this experience made me establish my own opinions about government and political views. With my parents constantly debating about who started the war, why aren? t the Americans coming, where is the humanitarian aid and many other questions concerning government policies, made me favor what my parents were saying and agree with them. By 1995, most of the fighting has stopped and siege was over and school back in session. Now, more views were formed to enforce what I been hearing at home, but as well some made me look at things in a different as well.

I started to develop my own thoughts that have been flooded with so much hate during my childhood. Schools played a really influential agent, after the family, due to the extended exposure to a variety of political beliefs. My friends and teachers, both respected sources of information in one way or another made me look at the world in a different way. I always to this date keep asking myself some of the same questions my parents debated about. I just can? t let it go. Why did so many people get shot, murdered, raped and killed in Srebrenica? In a U. N safe zone, but it still happened.

School thought us the history and not to forget. With school back in session, so was the television, newspaper and other sources of mass media. Media took over and attempted to reshape what we all have experienced in the previews five years for the benefit of their own profit. Foreign investors came in and took advantage of others need at a very cheap cost. I remember, first commercial on the national television was about the new mall what was to replace the shelled down Olympic village and the new president was going to be at ceremony. New lottery game was advertised everywhere with faces of political party members.

It like nothing has happening the year before. Another factors started to surface with me. Did a religion cause this terrible war? With so much talk about genocide and ethnic cleansing, religion was being though in school. At that time it was unbelievably hard to form your own opinions with so much information being fed to you by the mass media and government policies. Today, I look back to everything that has happened and how did I come to the thoughts and opinions I have about politics. Family was a primary influence in the development of my political orientation, mainly due to constant relationship between my parents and I.

Schools became a source to enforce what I been hearing at home. Then Mass Media took over and tried to paint a picture of functions as a political information-giver to adolescents and young children. With placing political figures in everyday life and association with political parties, I can only imagine what their goal was. The earliest socialization I believed is the deepest one because i favored with what parents have been going along with. Their political party favor and mine today however now that I am old enough and been influenced by a different culture I am beginning to rethink many views on our world today. 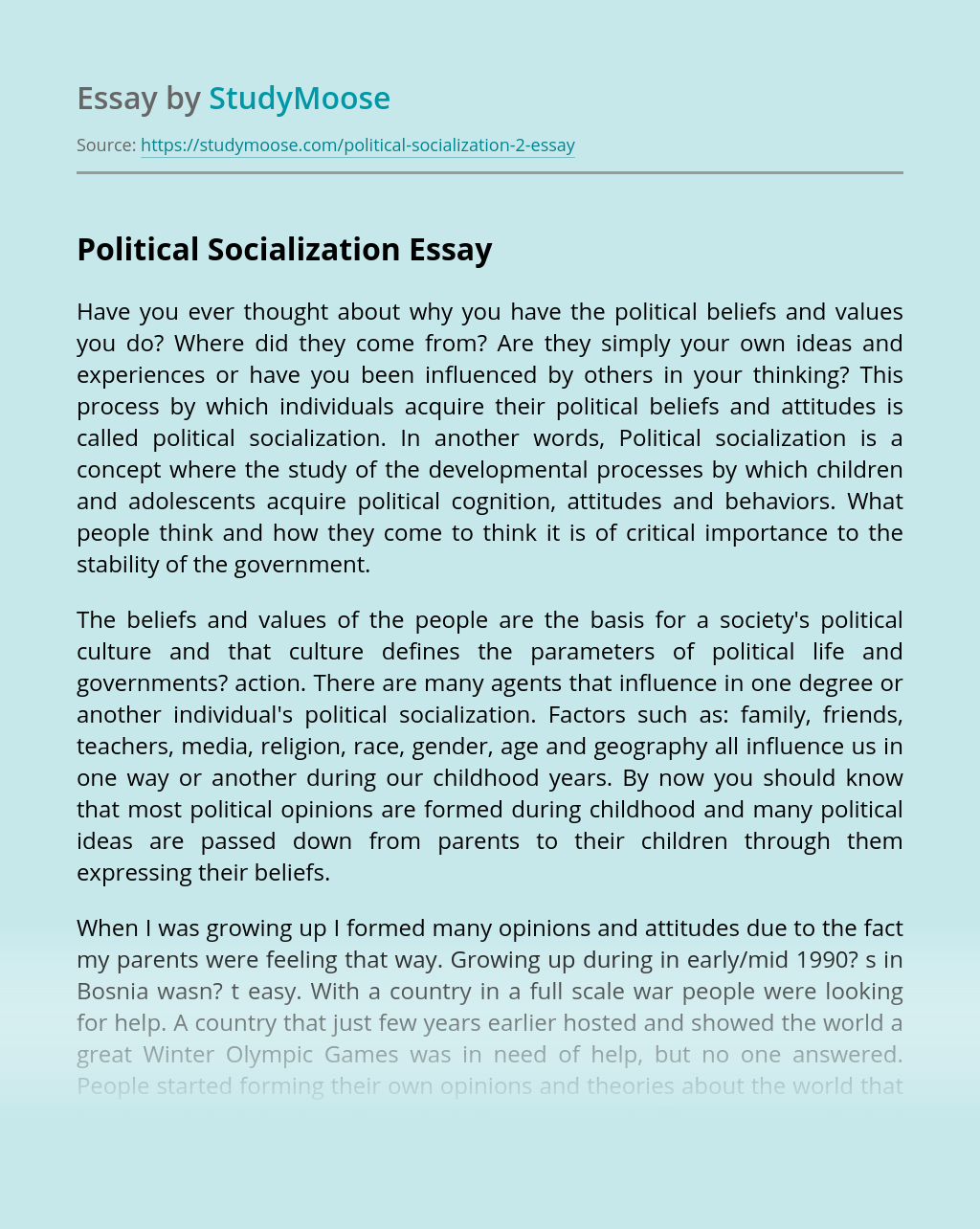 They say the mad lover is drugged often by the exhaustion of the confusing state they are in. It is like drowning. Drowning in an ocean with nothing to hold on. Although they will not be able to breathe, they will still feel a sharp sting of unavoidable pleasure around themselves. They will still desire...

With all these manly characteristics that Eddie strongly believes a man needs, if someone doesn’t conform to them it is surely to create conflict and tension between the characters. Rodolfo is young, blonde, a dress maker, cook, singer and dancer! To us in the modern world this can be normal for a young man but...

Held annually in the city of Tagum, Davao del Norte during February 21-27, Musikahan Festival also known as Musikahan sa Tagum, is a distinct cultural event celebrating Filipino excellence in music through composition, performance and production, providing the youth with more opportunities in the music industry as its goal. Local government of Tagum provides musical...