Political Polarization: The Return of the Norm in the United States of America

Political polarization, “an intense commitment to a candidate, a culture, or an ideology that sets people in one group definitively apart from people in another, rival group,” (Wilson 80) stopped being the norm in the United States of America after the Civil War, but it has recently become the norm once more. Wilson writes that between the end of the Civil War and the latter half of the twentieth century, “in electing a president, both parties would sacrifice any interest in principle or policy to accommodate the views of the average voter and thus would almost always offer an echo, not a choice.

Don't use plagiarized sources. Get your custom essay on
“ Political Polarization: The Return of the Norm in the United States of America ”
Get custom paper
NEW! smart matching with writer

” (Wilson 4) This would prevent polarization, as both candidates would, fundamentally, be the same.

However, it was clear in the first presidential election of the twenty-first century that the presidential candidates were, at least in the eyes of the public, polar opposites. “70 percent of those who thought abortion should always be legal voted for Al Gore,” Wilson writes, “while over 80 percent of those who thought it should always be illegal voted for George Bush.

” (Wilson 82) This phenomenon repeated itself in the following election, with John Kerry substituted for Al Gore. Whether or not the candidates really were different, they were definitely perceived as being so. One of the chief causes of today’s political polarization is the change in how the public receives their news. “When there were only three television networks,” Wilson writes, “and radio stations were forbidden by the fairness doctrine from broadcasting controversial views, the media gravitated toward the middle of the ideological spectrum, where the large markets could be found.

But now that technology has created cable news and the Internet, and now that the fairness doctrine has by and large been repealed, many media outlets find their markets at the ideological extremes.” (Wilson 86)

The fairness doctrine mentioned by Wilson is a policy that was once enforced by the Federal Communications Commission to ensure unbiased news coverage. It faded into irrelevancy around the turn of the century because, like most FCC policies, it only applies to broadcast networks, and not cable ones. While the circumvention of the fairness doctrine has undeniably contributed to political polarization, extending its reach to cable networks would not undo the damage caused by its absence. As Wilson stated, not only has cable television risen to prominence, but also the internet. If Fox News is forced to tone down its conservative bias, then its viewers could simply use the equally conservative website Breitbart.

This is, of course, assuming that the fairness doctrine isn’t applied to the internet as well—a reasonable assumption, given the public outcry in response to previous attempts to censor the internet. Another one of the causes of today’s political polarization is the country’s continual move towards secularization. Religious beliefs, or lackthereof, play a significant role in the stances taken on many political issues. In discussing the 2004 election, Wilson writes that “voters who attend religious services at least weekly were three times as likely as those who seldom or never went to church to oppose abortion and twice as likely to object to gay marriage or to describe themselves as conservative.” (Wilson 97) Although the Bible does not specifically condemn abortion, it does refer to fetuses in the womb as being people equivalent to any other person. Because the primary argument in favor of legal access to abortions is that fetuses don’t count as people, and the Bible states that fetuses are people, one who believes that the Bible is God’s word would likely not be in favor of legalizing abortions.

Furthermore, the Bible defines marriage as a bond that is strictly between a man and a woman and, at one point, outright condemns homosexual intercourse as being sodomy and, therefore, a sin in the eyes of God. One who believes that the Bible is God’s word would, therefore, not want to encourage homosexual activity, especially same-sex marriage. When all of this is taken into account, it makes sense that followers of Christianity and Judaism, two of the most prominent religions in America, would identify as being conservative. Conservatives, by definition, want to uphold traditional values, such as the sanctity of marriage and the specification of life as beginning at conception, while liberals want to the opposite. As more pressure is put on citizens to separate church from state, more Christians and Jews will move towards conservatism.

Earlier in this essay, I wrote that the rise of cable television and the internet contributed to political polarization by allowing news outlets to circumvent the fairness doctrine. However, these two forms of media, along with many other modern forms of communication, have also contributed to political polarization in another way. Not only are religious Americans becoming increasingly conservative, but they are also becoming increasingly close geographically. They are moving to places, such as “the Bible belt,” where they know that other religious conservatives can be found. They are aided in this goal by their newfound awareness of regional differences. Granted, regional differences have always existed in the United States of America, as evidenced by the split of the northern states into the Union and the southern states into the Confederacy during the Civil War.

However, the American people have never been so keenly aware of these regional differences. Furthermore, these regional differences are exacerbated by our nation’s employment of federalism, “a political system in which power is divided between the central and regional units.” (B&W G-3) States can create rules and regulations that cater to the needs of their specific populace, such as “local traffic laws, community school policies, and city and country housing codes.” (B&W 109) The political polarization of the public is not exclusive to the public, though. In fact, it exists in the American government itself-specifically, in congress. “When, in 1998,” Wilson writes, “the House deliberated whether to impeach President Clinton, all but four Republican members voted for at least one of the impeachment articles, while only five Democrats voted for even one. In the Senate, 91 percent of Republicans voted to convict on at least one article; every single Democrat voted for acquittal.” This is because the American government is imperfect and made up of people who, as previously stated, have proven susceptible to polarization.

“The reasons for the widening fissures in Congress are not hard to find.” Wilson writes. “Each of the political parties was once a coalition of dissimilar forces: liberal northern Democrats and conservative southern Democrats, liberal coastal Republicans and conservative midwestern Republicans. No longer; the realignments of the South (now overwhelmingly Republican) and of New England (now strongly Democratic) have all but eliminated legislators who deviate from the party’s leadership.” For context, “the party’s leadership” now refers not only to the leaders of the party, but also to said leader’s polarization levels—which are, these days, as strong as they possibly can be. (Wilson 85) The polarization of congress has, itself, begat more polarization.

Wilson writes that the result of congressional polarization “has been not only intense partisanship but a sharp rise in congressional incivility.” [sic] He then brings up a specific, anecdotal example. “In 1995, a Republican-controlled Senate passed a budget that President Clinton proceeded to veto; in the loggerhead that followed, many federal agencies shut down (in a move that backfired on the Republicans).” A government shutdown such as this is, essentially, holding the country hostage. When the Republicans refuse to reach a compromise with the Democrats, or vice versa, in regards to the national budget, it creates a stalemate that prevents federal agencies from being funded until its resolution.

The last government shutdown, in 2013, was organized by the Republican party in response to ObamaCare. It lasted for several weeks, and the Republican party recently threatened to stage another government shutdown over Planned Parenthood. In addition to the increased frequency and duration of government shutdowns, the polarization of congress has led to a climate that is more hostile overall. “Congressional debates,” Wilson writes, “have seen an increase not only in heated exchanges but in the number of times a representative’s words are either ruled out of order or ‘taken down’ (that is, written by the clerk and then read aloud, with the offending member being asked if he or she wishes to withdraw them).” (Wilson 85)

The congressional climate is so hostile that emotional outbursts are a frequent occurrence, and so is having them stricken from the record. Exacerbating the increasingly polarized congress are the increasingly polarized interest groups. “In the past,” Wilson writes, “the major ones—the National Association of Manufacturers, the Chamber of Commerce, and labor organizations like the AFL-CIO—were concerned with their own material interests.” These were organizations of people who wanted to keep their organizations running so that they could keep doing their jobs and earning their salaries. “They are still active,” Wilson writes, “but the loudest messages today […] are issued by groups concerned with social and cultural matters like civil rights, the environment, alternatives to public schools, the roles of women, access to firearms, and they directly influence the way people view politics.” (Wilson 88)

At one point, interest groups acted solely out of self interest, and while those interest groups still exist, a new strain of interest groups uses the same methods of the other strain, but to achieve goals rooted in altruism. Naturally, as with all matters of morality, this leads to conflict. Wilson writes, “Interest groups preoccupied with material concerns can readily find ways to arrive at compromise solutions to their differences; interest groups divided by issues of rights or morality find compromises very difficult.” (Wilson 88) The ways that people receive their information have changed.

Today, the main outlets for information are cable networks and online blogs. These are informational outlets are less reliable than those of the previous generation, and they also cater more to niche markets with specific biases. This has led to an increase of political polarization among the American people, who are now flocking to areas where they can be around those who are like-minded. This has had impacted not only normal citizens, but members of congress, who now communicate in polarizing (i.e. rude) ways and sometimes even withhold federal funding from distribution in order to make “the other side” comply with their demands, which are influenced by polarized interest groups with altruistic intent, using methods appropriated from previous generations’ more pragmatic interest groups. If this trend continues, then the nation might reach levels of polarization not seen since the Civil War, which raises the question of whether another Civil War may happen in our lifetimes.

Political Polarization: The Return of the Norm in the United States of America. (2021, Sep 15). Retrieved from https://studymoose.com/political-polarization-the-return-of-the-norm-in-the-united-states-of-america-essay 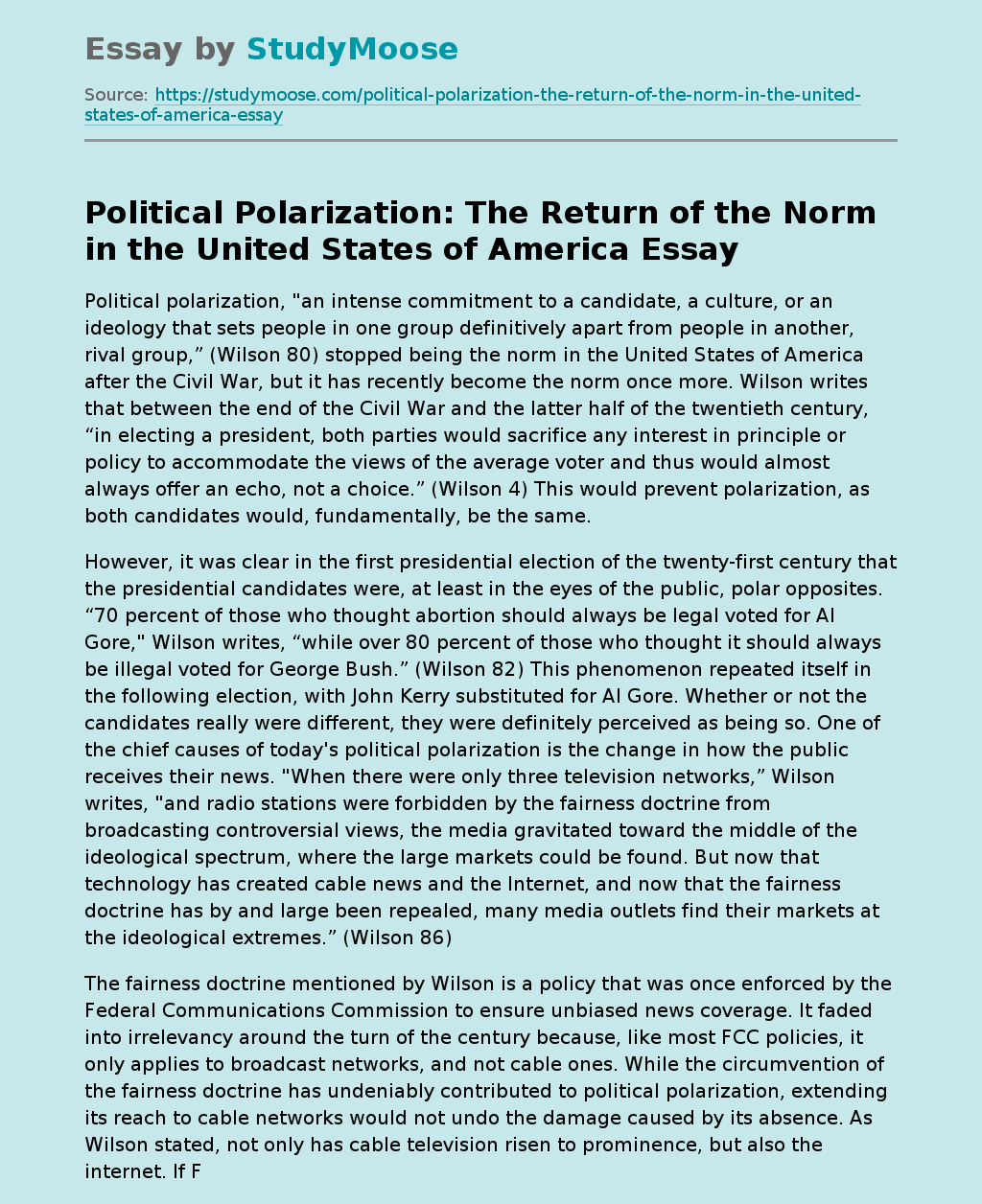