There are currently two major political parties in the United States, the Democratic and Republican party. There are many third political parties in the United States but, the Libertarian, Constitutional, and Green party are some of the most currently active. Each party has their different views on how the government should be ran and goals that they would like to achieve if ever elected. Despite their differences, their main interest is to bring forth a form of government that they believe is best for the citizens and running of the United States.

Don't use plagiarized sources. Get your custom essay on
“ Political Parties in USA ”
Get custom paper
NEW! smart matching with writer

The Democratic Party is the oldest political party in the United States. Democrats are often referred to as “the Party of the People,” attracting blue-collar workers, immigrants, minorities and, women. (“What do parties stand for?”) They are also known for having a liberal approach when it comes to important issues such as protecting civil liberties and human rights. (Conservative vs. Liberal Beliefs. 2010.) The democrats believe that the role of the federal government should be active in the citizens lives and that social programs are critical to those who need additional support from the government such as people with disabilities or the unemployed.

The Republican party was founded in 1854 and is often called the ‘Grand Old Party’. Republicans are known for having a more conservative and traditional stand on issues such as abortion and gay marriage. They believe that the federal government should not play a big role in the citizens lives and that less government power allows the people to have more freedom from regulations by having the states make their own laws for the people.

The Republican party is famous for striving to lower taxes and less government spending on social programs. They also believe that the less government intervention is good for businesses and the economy. (“What do parties stand for?”) I like to think of the Libertarian party as being the common ground between the Democratic and Republican party. The Libertarian party with the Democratic party by having the same views on some topics such as supporting gay marriage and their stance on other social issues but, also with the Republican party by having the same principles on topics such as government regulation and taxes. They believe that the people should be in control over their own lives and shouldn’t have to sacrifice their beliefs and values for others. (Libertarian Party Platform. 2018.)

The Green Party was founded in 2001 and was created from the previous Association of Green State Parties. (Platform. 2016.) The Green Party is known for advocating for environmentalism, social justice, nonviolence, and grassroot organizing. (Platform. 2016.) This party’s’ main goal is to increase public participation in the government, the better development of communities, operating with justice and democratically, and an upholding of a healthy environment. (Denmar. 2017.) After concluding my research about the five political parties, I would have to say that the Libertarian party is within my best interest and what I would associate myself with. I value their stances on social topics and pro liberty beliefs, but I also value individual right and freedoms. 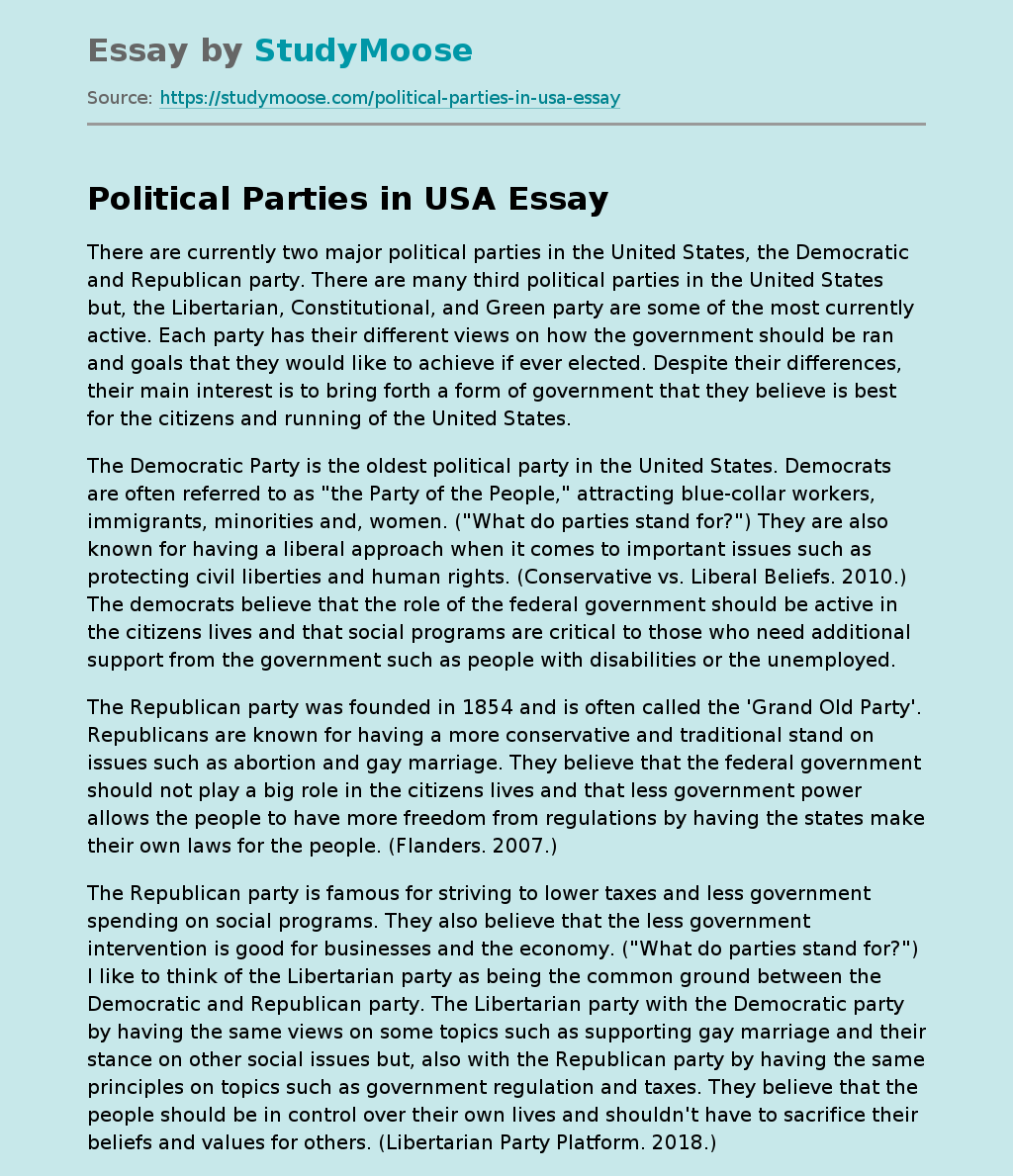