Both former Presidents Theodore Roosevelt and Woodrow Wilson term in office contributed to the increase of working class Americans. Each of the presidents was part of Progressive era, where people mattered. They both had different political views. President Roosevelt was a Republican and President Wilson was a Democrat. However, they both have had strong foreign policies to protect the United States allies. President Roosevelt built a strong Navy program and built National Parks in the United States. On the other hand, Wilson wanted to ensure authority over unions.

Don't use plagiarized sources. Get your custom essay on
“ Political Ideologies of Theodore Roosevelt and Woodrow Wilson ”
Get custom paper
NEW! smart matching with writer

Even though both of these presidents had different views, their aim was the same: to create a better United States. Both of these presidents were known for their role in the Progressive Era. The Progressive Era is noted from the 1890s to 1920s. It is known as the boost of political and social reform. Further, economic growth through industrialization helped the American people. The Progressive Party of 1912 was established because of a divide in the Republican Party during the 1912 presidential election.

According to Wilson (1913), “Change is not worth while unless it is improvement.

If I move out of my present house because I do not like it, then I have got to choose a better house, or build a better house, to justify the change.” This Progressive Party was established by Theodore Roosevelt after he lost the Republican nomination to the incumbent President William Howard Taft. Further, the Progressive Party was also known as the Bull Moose Party because of the emblem the party chose to represent them.

Lastly, President Theodore Roosevelt was known for his boasting of the party saying it was “As strong as a bull moose.” “All progress depends on how fast you are going, and where you are going, and I fear there has been too much of this thing of knowing either how fast we were going or where we were going” are words by Woodrow Wilson. Because industrialization was growing during this time, the conservative and traditional views of American life were challenged. Though this time period was filled with economic challenges, the goal was to bring economic security to the working class. In the same case, Woodrow Wilson’s philosophy was somewhat the same.

Wilson states “Our country — this great Republic — means nothing unless it means the triumph of a real democracy, the triumph of popular government, and, in the long run, of an economic system under which each man shall be guaranteed the opportunity to show the best that there is in him.” Wilson called this the “New Nationalism.” Their vision was similar but their methods and views is what differ. The Progressive movement is known to be considered great under American Presidents: Theodore Roosevelt, Woodrow Wilson, Franklin Delano Roosevelt and Lyndon Johnson. President Theodore Roosevelt, also known as “Teddie,” was age 42 years old when he became President of the United States in 1901. Even though he was the twenty sixth President of the United States, he was the youngest president to ever hold office. During this term in office, he won the Nobel Peace Prize. Before he began his political career, Roosevelt was in law school.

However, he was drawn to politics and ran for mayor in New York, where he was defeated. Further, he was a member of the National Guard and served as Minority Leader of the New York Assembly. In 1898, he became governor of New York. During his time in war, Roosevelt was awarded the Congressional Medal of Honor. According to Theodore Roosevelt’s biography, he is best known for his foreign policy, corporate reforms and ecological preservation. One of his greatest quotes is “A great democracy must be progressive or it will soon cease to be great or a democracy.” Further, President Theodore Roosevelt is known for his work in the building of the Suez Canal. President Woodrow Wilson was elected the twenty-eighth President of the United States. He served in office from 1913 to 1921. Before becoming President of the United States, he served as President of Princeton University from 1902 to 1910. Later, he became Governor of New Jersey from 1911 to 1913. He is best known for leading the United States through World War I. He proves he was a Progressive President by overseeing the passing of the nineteenth amendment for Women’s Right to vote.

Further, he helped small business and farmers through establishing criteria for the average American to secure loans. Wilson also helped shape the face of the federal income tax. Lastly, he created the Clayton Anti-trust Act, which protected union workers. Based on this track record, he proves to me a president who worked hard to ensure America would “progress” to a better future. The major contrast between the two gentlemen was their view on war. President Roosevelt believed and understood the importance of war. As stated previously, he served in war.

On the other hand, President Wilson was against war. When President Wilson was re-elected, he began to prepare for war during the early 1900s. Many say that President Roosevelt used his political power whereas President Wilson did not. However, they both wanted a new face for America. In the conclusion each of the presidents had their own different views because they represent different political parties. President Wilson accomplished the federal reserves, tariff, and the antitrust act. Since President Roosevelt accomplished railroads, drug administration, and food act. Both presidents wanted to create a better America for the common man. They both ultimately wanted America to progress. It is because of their progressive approach entwined in her political views; they created a better America which we have continued to build on their legacies. 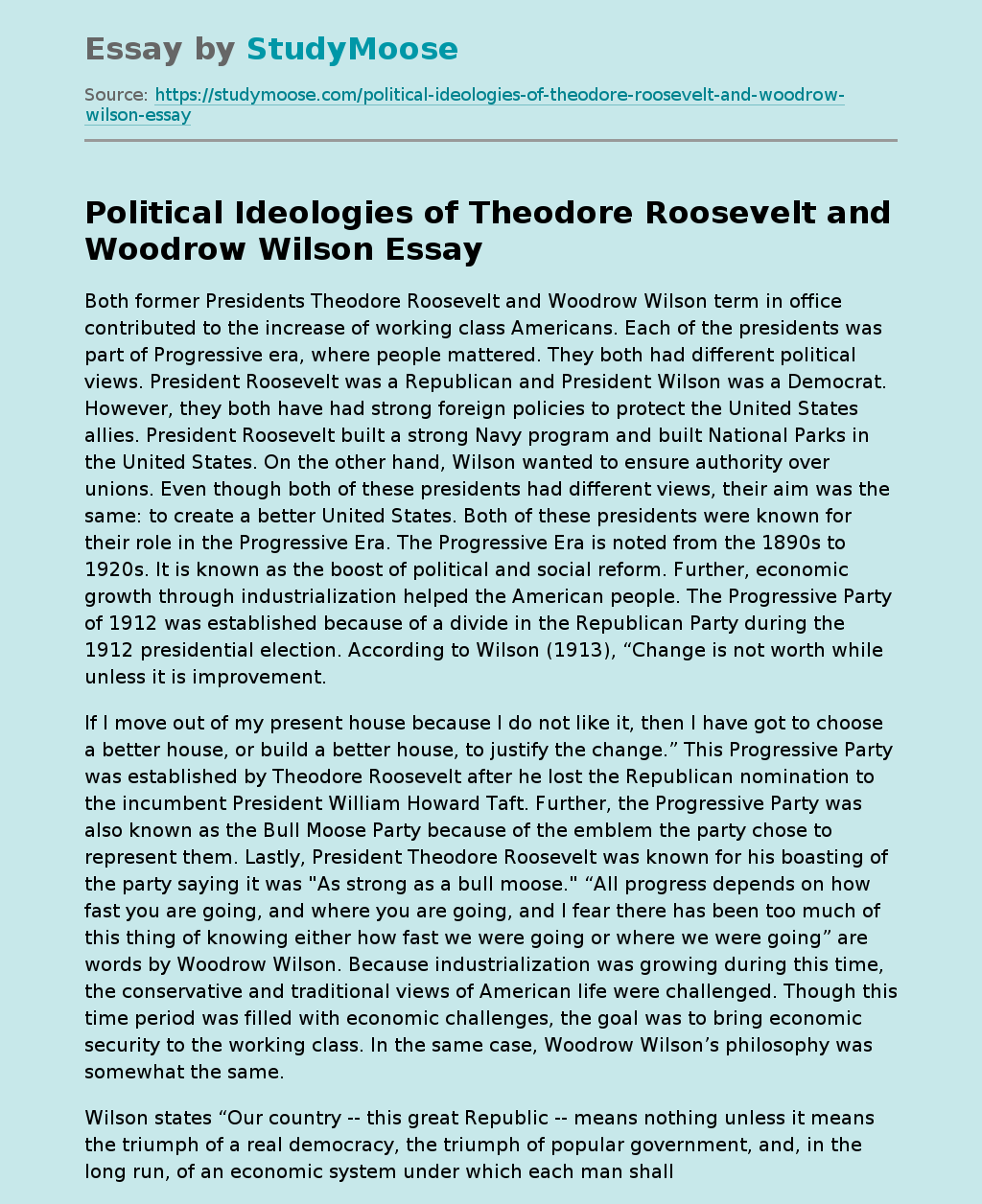