Fraser assumes that “redistributive remedies for political-economic injustice always dedifferentiate social groups” and “recognition remedies for cultural-valuation injustice always enhances social group differentiation”.  South Africa is one of the first countries in the world to recognise gay and lesbian rights and arguably the broaden of the scope of these rights has been achieved through the aide of the National Coalition of Lesbian and Gay Rights(NCLGE), later replaced by the Equality Project but it has also in some ways failed to transformative effect on the heteronormative perceptions on queer rights.

Don't use plagiarized sources. Get your custom essay on
“ Political-Economic and Social Injustice ”
Get custom paper
NEW! smart matching with writer

Recognition treat group difference. First it can be thought of “as pre-existing cultural variations, which an unjust interpretative schema has maliciously transformed into a value hierarchy”, or recognition can also treat differences as existing and occurring simultaneously with each other.  The homosexual rights victories were largely brought about by the National Coalition for Gays and Lesbians. They brought about changes with regards to recognition of same-sex marriage , decriminalising sodomy , the ability to jointly adopt children etc.

These victories, although significant for some part of our communities, may have a limited impact for the black LGBTI community.

The National Coalition has been critiqued for their conservationist, elitist, white and heteronormative. The formulation of legal arguments were directed towards benefiting more affluent gay and lesbians. The social movement disbanded in the year 1999 for the following identified reasons.

It seems, that as far as legal recognition is concerned for homosexuals has been achieved to a limited extent, in the sense that the assertion of queer rights generally find application for white queer persons and benefit them, there have multiple successes that have achieved here, it seems though that the redistributive effect of legal strategy adopted by the social movements such NCGLE/EP also have a very limited redistributive effect, especially in the black communities. NCGLE and/or the Equality Project that later replaced the National Coalition, did this if by virtue of liberating gay and lesbians’ rights, would also mean asserting the rights of ‘ poor gays and lesbians’ which has not, in fact happened.

Oswin argues further in his article that we can merge identity politics and class issues. This kind of strategy is not useful for the fight against redistribution. As Modiri argued you cannot be essentialist when we think of race and we try to remedy racial disinvite through redistribution. Using the very generalised ‘gays and lesbians ‘ makes the assumption that all gays and lesbians are oppressed the same way. I pause to make a reflection on the life of a black lesbian for example, who faces discrimination on multiple fronts, as a woman and as a lesbian. That is why perhaps the id due surrounding the issues faced, say black lesbian person has not been properly addressed, like. In this respect Fraser becomes useful in her assessment of quoting that so recognition and redistribution must be deployed together to bring about social change. Consequently, by virtue of generally recognising gay and lesbian rights, without taking an anti-essentialist view inevitably lead to maldistribution.

It’s necessary here to make a reflection of Wendy Brown and the paradoxical nature of rights. It is important to dismantle the foundational values that have subjected queer people from being recognised in society and being discriminated against, to affect a redistribution in this community for the recognition of marital rights. The legal strategy adopted in South Africa, was a separate Act that deals with the question of regulating same sex partnership and granting the same benefits as you would find in a traditional marriage. For instance, homosexuality in the African culture occurs in different way and does not strictly conform to the ideals of a homosexual or homosexual relationships. In the African culture there male who may identify themselves heterosexual and as injonga ( they are generally the older partner) and the skesana which are the younger party and feminine. The skesana may also later take on the role of an injonga. There is also proof of a customary marriages by the Queen of the Lovedu, who wives, they are expected to engage in procreational sex any children born from these wives are deemed to the children of the queen, as such the Civil Union does not cater nor does it recognise these kinds of relationships. These economic benefits such as being able to share the medical aid with your spouse or having access to or sharing your deceased spouse’s estate. This redistribution was brought about by re-inscribing the idea of queers being ‘ other’, and are treated ‘specially’ and different from, this is the process of engaging in ‘differentiated redistribution’.

Other redistributive effects have not yet been addressed by the legal strategy… For instances , a person in South Africa that identifies as transgender and makes the decision undergo gender assignment surgery, may, after such surgery apply to change their genders, however many other real life issues that occur even with this community have been highlighted in this article “https://www.groundup.org.za/article/changing-your-gender-south-africa_3305 ” the problems are distinct however, depending on your class, for example, those who are may not have access to the surgery that will allow for them to make the full gender assignment surgery due to the fact that there is only one hospital, namely the Groot Huur which does these surgeries, as such the waiting period would be for 20-21 years.

For those middle and upper middle class, the issue becomes medical aid that does not provide support with these kinds of surgeries. Redistribution may therefore call for a strategy that serves to invest state resources into making these kinds of resources available. Or giving effect to these rights by reviewing medical insurance benefits that exclude this surgery as being ‘cosmetic’. The recognition-redistribution dilemma brings to light how difficult it may be to deal with and wield and that the inability to adopt an anti-essentialist view in recognition or queer rights, has had a negative impact of redistribution in the queer community. 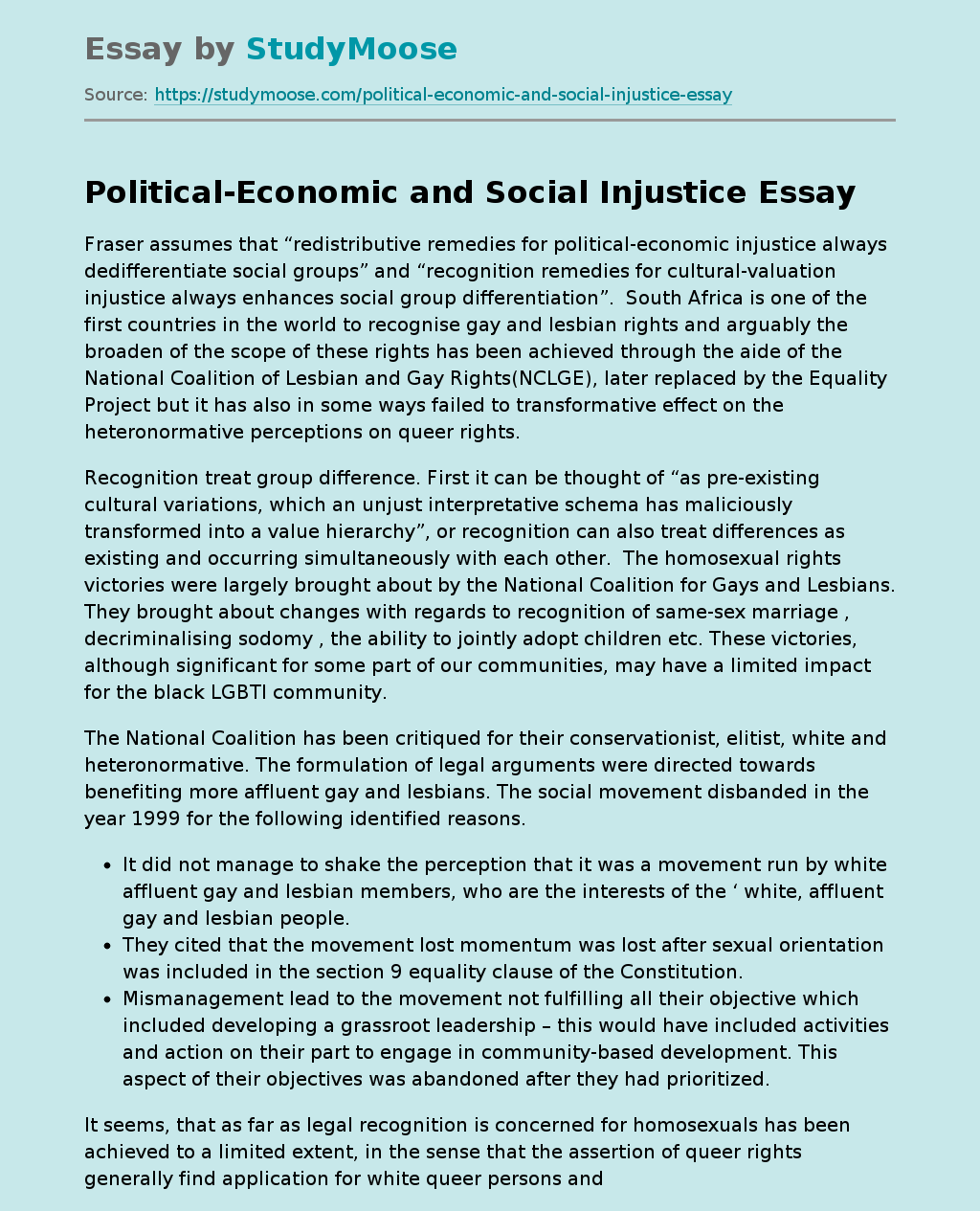