Political culture is a deeply and rooted concept in political

Don't use plagiarized sources. Get your custom essay on
“ Political culture is a deeply and rooted concept in political ”
Get custom paper
NEW! smart matching with writer

Political culture of a society explains how people affect politics whether through participation in election or voting or participation in decision making, which means culture is considered as a constraints to political system. Political culture may be considered unstated rules like it sets the boundaries of acceptable political behavior in a society.

The study of political culture arose in time 1960s when Rostow and Lipset talking about political values and its role to reach political development.

In 1963, two political scientists, Gabriel Almond and Sydney Verba, published a study of the political cultures which entitled (the civic culture: political attitudes and democracy in five nations) associated with five democratic countries: Germany, Italy, Mexico, the United Kingdom, and the United States.

According to Almond and Verba, there are three basic types of political culture, which can be used to explain why people do or do not participate in political processes:

Parochial political culture citizens are mostly uninformed and unaware of their government, they don’t have any tendency to participate in politics, and this type has no role to perform in political system like African tribal societies and Mexico

Subject political culture Like Germany and Italy, citizens are somewhat informed and aware of their government and occasionally participate in the political process, this type isn’t tough to participate in politics, sometimes they aren’t allowed to do so.

Participant political culture like the United Kingdom and the United States, citizens are informed and actively participate in the political process, in this category huge number of political parties and interest groups are found.

This means that the political systems and the role of participation depends heavily on the type of it’s political culture.

On the other hand, Another Contradictory argument, That Rational theorists have argued that participation and particularly voting is considered to be irrational especially in a large country that the probability that one vote will decide the outcome of an election is microscopic, For them Participation has many costs that exceeds the benefits for the voter as: The effort in order to learn about the candidates also it take too much time too vote. They argued that voting process does not make sense for people as an activity.

Since the beginning of the 20th century, for example the American VOTER TURNOUT has been declining. Less than 50% of eligible voters went to vote, in 1996 in the presidential elections. Smaller percentages are routinely reported for congressional elections, and even fewer Americans bother to vote for their local representatives. The United States ranks near the bottom of modern democratic nations who measure voter turnout.

There are many factors that explain the reason of low voter turnout. There are many analysts cite growing alienation among voters. The scandals in the past several decades have engendered a cynicism that has led to a decline through the political interest, especially between the nation’s young voting population.Individuals believe that its not there vote that would make a difference. Some observers viewed that the decrease in the voter turnout means that Americans at those times felt less certain that they can have an impact than Americans of the 19th century.

On the other hand, political participation may not always be affected by political culture and regulations. As cited by Hilmy Mochtar ”Public Participation and Political Culture: A Case Study of Voting Behavior in Jombang Regency ” where he mentioned that political participation was in fact depended on the geographical-economical and socio-religious conditions. Voters’ behavior didn’t depend on culture, but more on daily concrete issues. For example as he mentioned ,if elections candidates use money to influence voters for their sake ,they would respond whatever the candidate’s political program was.

Political culture is a deeply and rooted concept in political. (2019, Nov 30). Retrieved from http://studymoose.com/political-culture-is-a-deeply-and-rooted-concept-in-political-example-essay 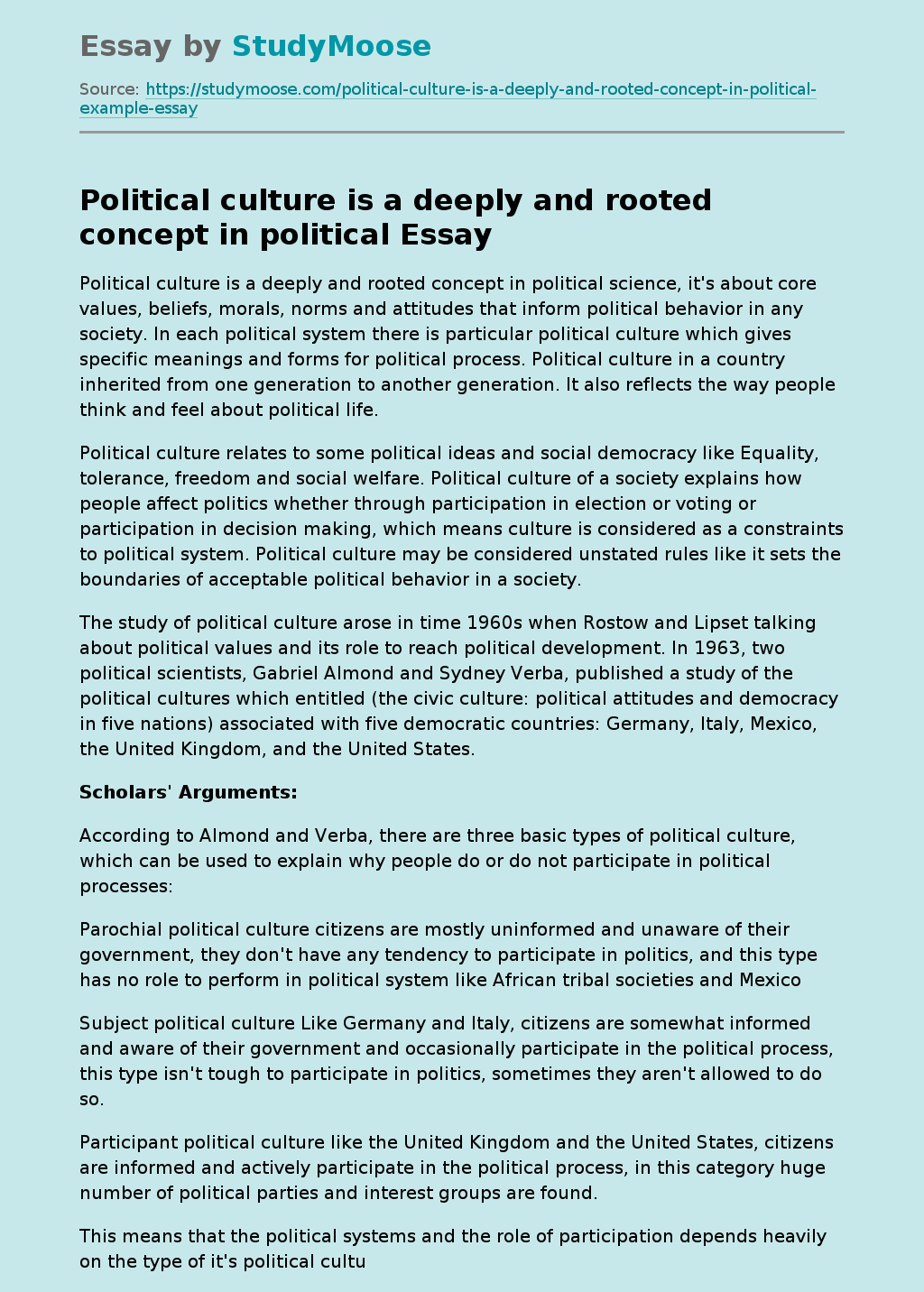