Yuan economic policies also accommodated traditional Chinese practices. Yuan rulers did not try to convert China into the Mongol-style nomadic economy; instead, they fostered agriculture. They restored the she, rural organizations composed of about 50 families, to assist in farming. These organizations also improved flood control, established charity granaries for orphans and widows, and introduced such new crops as sorghum. In addition, early Yuan emperors sought to protect the peasants by devising a regular, fixed system of taxation.

Don't use plagiarized sources. Get your custom essay on
“ Political and economic effects of Mongol rule on China and Middle East ”
Get custom paper
NEW! smart matching with writer

Moreover, they promoted commerce by increasing the use of paper money, by offering cheap loans to merchant associations (ortogh), by building roads, and by allowing traveling merchants to lodge and to obtain supplies at government postal stations, which were located about 32 km (20 mi) apart throughout the empire.

Concern about supplying the new capital led the Yuan court to initiate the ambitious project of rerouting and expanding the Grand Canal, aiding the shipping of surplus grain from southern China to the less fertile lands of the north.

Such government support for merchants, together with the peace imposed on much of Asia by the Mongols, resulted in the greatest expansion of commerce in Eurasian history. Indian, Southeast Asian, Persian, Arab, and even European merchants arrived in China.

Muslim merchants, the principal intermediaries in the overland trade between China and Central Asia, West Asia, and Europe, brought horses, carpets, medicines, and spices to China, and exported Chinese textiles, ceramics, and lacquerware.

From the southern port cities of Quanzhou (Ch’üan-chou), Guangzhou (Kuang-chou), and Yangzhou (Yang-chou), they conveyed Chinese ceramics and silks by ship and returned with spices, precious stones, incense, pepper, and medicines.

The growing agricultural and commercial economy initially provided sufficient revenue for the court, but not for long. The original tax structure did not exploit the Chinese and was not burdensome on landlords, peasants, merchants, or artisans. In fact, Kublai Khan repeatedly reduced or postponed taxes on those of his Chinese subjects whose lands had suffered during natural disasters.

Yet the various construction projects he had undertaken, the building of the capital, postal stations and roads, and the enlargement of the Grand Canal, as well as military campaigns against Japan, Java, and mainland Southeast Asia, were costly. As the government’s expenditures soared, its need for additional revenue became more pressing.

The court responded by appointing two new non-Chinese ministers whose principal duties were to raise more funds. However, their authoritarian methods only worsened the problem. By imposing higher taxes on merchants, deliberately inflating the currency, and increasing prices on salt, iron, and other goods monopolized by the government, they succeeded only in alienating Chinese officials. Finally, their highhanded treatment of the bureaucracy and their profiteering led to the assassination of one and the execution of the other. The economic situation merely declined further.

Political and economic effects of Mongol rule on China and Middle East. (2016, Apr 30). Retrieved from https://studymoose.com/political-and-economic-effects-of-mongol-rule-on-china-and-middle-east-essay 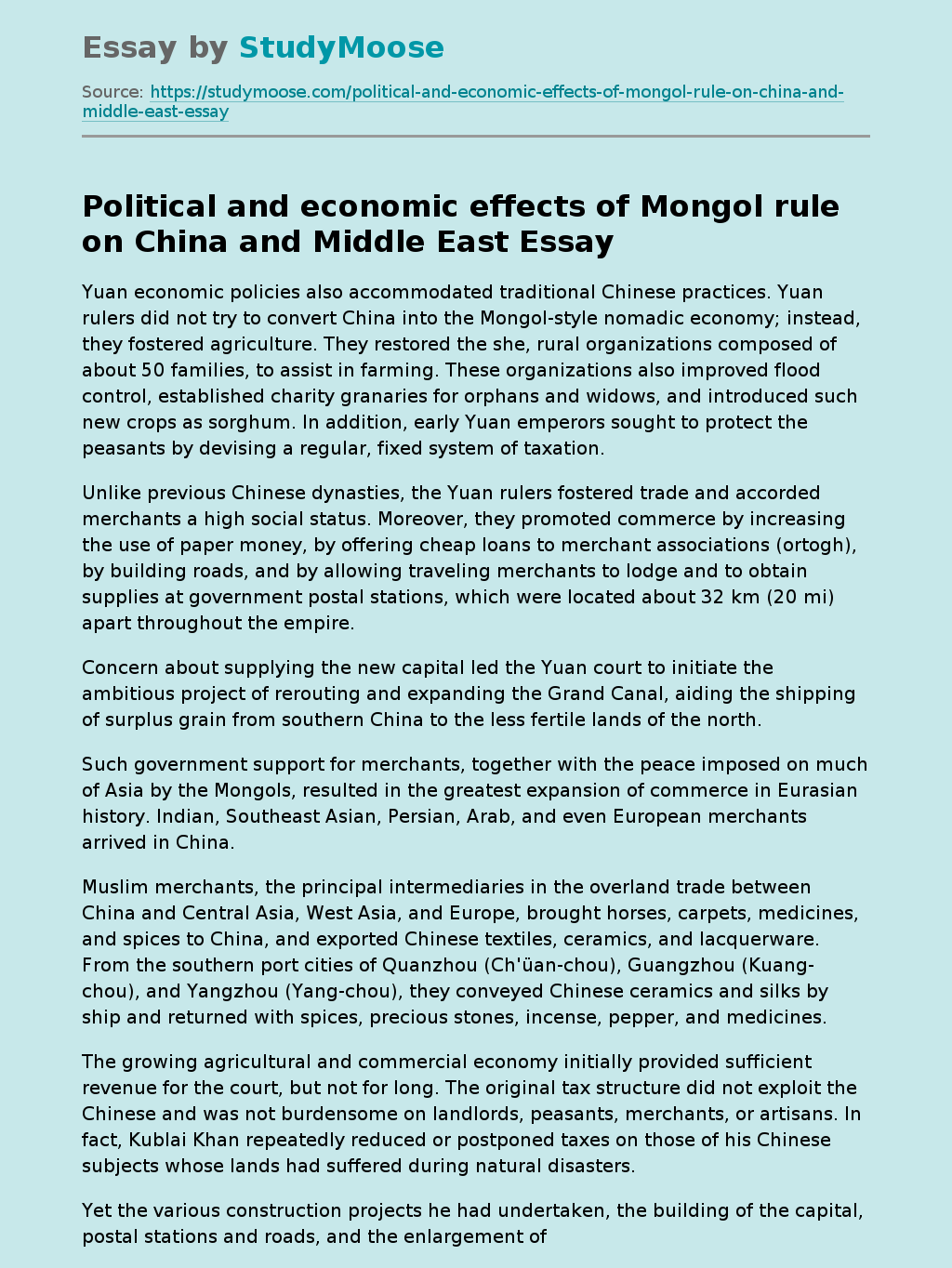