Turn in your highest-quality paper
Get a qualified writer to help you with
“ Police Misconduct ”
Get high-quality paper
NEW! AI matching with writers

While being a police officer, you have guidelines and rules that you need to follow just as if you worked as a chef or even a sales associate you have rules and regulations to follow while at the work place. For police officers though, the rules and regulation still apply while being off duty. Police enforcement officers may use their powers of arrest while off duty, and because of the danger of abusing those powers can cause to individuals and the community, police officers are supposed to be held to a higher standard of conduct, both on duty and off duty, than members of other occupations.

Police misconduct can be broken down into 3 categories. Civil, procedural, and criminal. Which means a violation in department policies, a violation in constitutional protections or a violation of the law itself. Not to say that two can’t be broken in one action or even all three at once. Many departments have what is called a “use of force continuum” which establishes the rules on what type of force is permissible in response to specific actions that a suspect may perform.

These policies are different from department to department. Some may permit officers to use force at the slightest sign of resistance yet others may specifically state that officers may not deploy certain types of force in response to resistance.

One type of police misconduct can be the use of excessive force. This means that while a police officer is arresting a person, they use force that is not needed in taking the person in. This can happen in the form of beating a person while making the arrest or using any unnecessary force against the person. Sometimes police beatings can be racially based or can happen due to an argument between the officer and the person. The use of excessive force in the law enforcement industry is not tolerated in any form. If a police officer is found guilty in using unnecessary force on a person they will be terminated from their job. Using unnecessary force is one of the more know types of police misconduct being that when excessive force is used on a person there is normally charges pressed on the officer and the case is brought into court and therefore into the media. Another type of police misconduct is sexual harassment. This would be when a officer sexually harasses a male or female individual. Most sexual harassment case are from a male officer to a female victim.

Some police officers like to take advantage of their authority and will go as far to rape individuals just because they feel that the fact that they are a police officer, they will be able to get away with it. A report done in 2010 showed that 6,613 law enforcement officers throughout the United States were involved with police misconduct. 9.3% was sexual harassment charges of police misconduct. Officer-involved sexual misconduct describes an entire subset of police misconduct that includes non criminal complaints such as consensual sexual activity that occurs while an officer is on-duty, sexual harassment, up to felonys of sexual assault or child molestation. Sexual misconduct was the second most common type of misconduct reported throughout 2010. 618 officers involved in sexual misconduct complaints during that time, 354 were involved in complaints that involved forcible non-consensual sexual activity such as sexual assault or sexual battery. Of the 479 alleged victims of serious sexual misconduct which were tracked, 52%, or 249 were minors and 48%, or 230 were adults.

This would indicate that minors are victims of alleged serial offenders more often than adults. Of the 354 officers involved with serious sexual misconduct reports, 56 law enforcement officers were involved in allegations where multiple victims were involved. Another type of police misconduct is known as kickback or bribery. Police officers have numerous opportunities to take financial advantage of those with whom they have dealings. Kickbacks and bribery could come from a store owner who would like extra protection, or from a drug dealer who wants an officer to look the other way. Many police officers get bribed throughout their career. Bribing a police officer is a automatic felony by law. You may not offer a police officer any amount of money in exchange for a service. Police officers who get caught accepting the bribe will be prosecuted. Recently in Suffolk County a sergeant was found take money from people he believed to be illegal immigrants. He was doing that because he knew they wouldn’t come forward about the wrongful acts at risk of being sent back to their country. A undercover Spanish police officer was sent out to get pulled over by the sergeant and he did in fact take a 100$ bill from the Spanish undercover and it was caught on camera. SCPD kindly let the sergeant, who has more than 20 years on duty, retire, before he was arrested.

He is awaiting trail and could face up to 20 years. Being that he targeted Spanish individuals, he could be charged with a hate crime. In conclusion, Police misconduct is low in the United States because most officers know that they are held at a high level than most members in society, and should be setting a positive example. Police officers also know that just because they have more powers than most individuals they should not be taking advantage of them to benefit personally. Although police misconduct is still a problem that will never totally be fixed, police departments should have harder rules and enforce the law harder on law enforcement officers. By letting Officers retire so they don’t lose their pension before they go on trial to me is wrong and not a way to stop police misconduct. 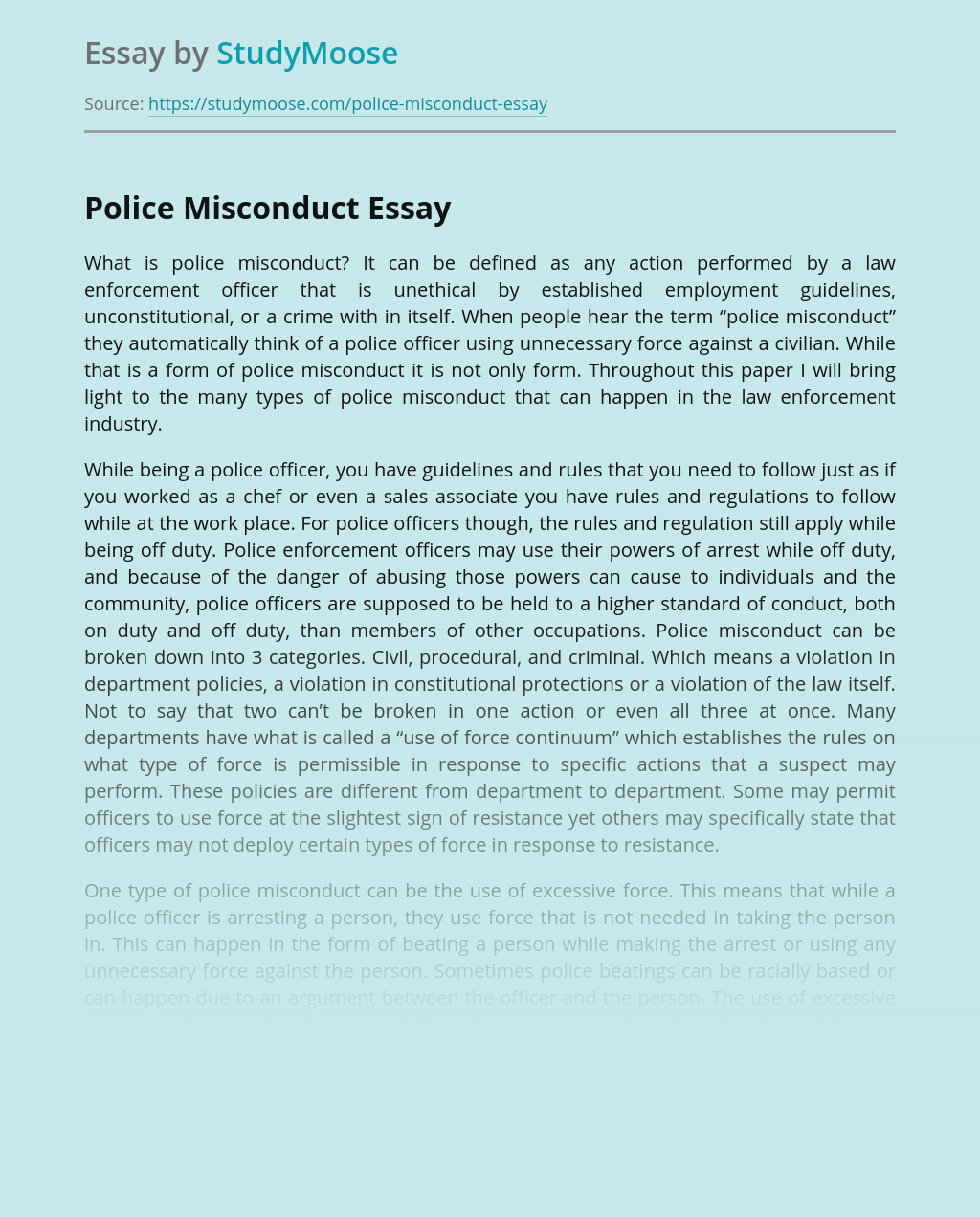 Turn in your highest-quality paper
Get a qualified writer to help you with
“ Police Misconduct ”
Get high-quality paper
Helping students since 2015
Stay Safe, Stay Original