Police Brutality Police Brutality is an ongoing problem and existent concern in the United States and should be resolved immediately. Law enforcement must function as an element that consists of organized and civilized officers. The presence of police brutality is becoming more of an issue as society grows. The growth of social media and camera phones have increased the national attention. The problem posed by the illegal exercise of police power is an ongoing reality for individuals of a disfavored race, class, or sexual orientation.

Don't use plagiarized sources. Get your custom essay on
“ Police Brutality Police Brutality is an ongoing problem and existent concern in the ”
Get custom paper
NEW! smart matching with writer

Police brutality must be stopped so that police do not forget who they are serving, which is the public not themselves. This means that even the criminals, who are a part of the public, have certain rights, particularly civil rights. Police brutality causes a major concern in today’s society in America and a resolution is imminent. When the United States was formed, it was much less diverse than it is today in terms of ethnicity and culture.

Around the early 1800’s, significant amounts of people began to immigrate into this country. This influx carried on for a while and still occurs today just with much smaller numbers. With the big mix of people, prejudice and hate crimes were not uncommon. By the mid-nineteenth century, the deterioration of cities had led to different laws that regulated public behavior as well as created new public institutions including the police force (Cosgrave, 2015). However, this divide created a separation between the law enforcers and citizens as well. In effect, we are ultimately left with racial, cultural, and ethnic profiling in policing.

In today’s era, allegations of the use of excessive force by U.S. police departments continue to generate headlines more than two decades after the 1992 Los Angeles riots over the beating of Rodney King police acquittal brought the issue to the mass publics attention and spurred some law enforcement reforms (Wihbey & Leighton, 2017). Recent deaths at the hands of police have fueled a lively debate across the nation in recent years. In several closely watched cases involving the deaths of young black men, police have been acquitted, generating uproar and concerns about equal justice for all. One case that happened in Staten Island, N.Y., the death of Eric Garner from the apparent use of a chokehold by an officer sparked outrage. A month later in Ferguson, Mo., the fatal shooting of teenager Michael Brown by officer Darren Wilson ignited protests, and a grand jury’s decision not to indict Wilson triggered further unrest (Wihbey & Leighton, 2017). In November of the same year, Tamir Rice was shot by police in Cleveland, Ohio. He was 12 years old and playing with a toy pistol. On April 4, 2015, Walter L. Scott was shot by a police officer after a routine traffic stop in North Charleston, S.C. The same month, Freddie Gray died while in police custody in Baltimore, setting off widespread unrest. The policeman in the South Carolina case, Michael T. Slager, was charged with murder based on a cellphone video but his first trial was a mistrial. In Baltimore, the driver of the police van in which Gray died, Caesar Goodson, was charged with second-degree murder, with lesser charges for five other officers but they were all acquitted. Because this happens in most cases, in the public there is a disconnect between the police and the minority communities they serve. Surveys in recent years with minority groups, mainly Latinos and African-Americans, suggest that confidence in law enforcement is relatively low, and large portions of these communities believe police are likely to use excessive force on suspects that look like them (Wihbey & Leighton, 2017). Highly publicized incidents of violence by police against African Americans are often linked to issues of racial profiling and police brutality. While preconceived biases may have played a role in many of these cases, such as the killings of Eric Garner and Philando Castile, each instance of officer involved violence against a black citizen does not necessarily reflect racial biases. Attributing the same bias to all officers based on a few cases paints an unfair image of all police. Biases does exist within individual officers in this country however, identifying the police as one block of people with the same mindset, biases, and behaviors is dangerous if one hopes to understand the racial aspect of police brutality (Suresh, 2017). The biggest problem is that cops aren’t held accountable for their actions, and it seems like it’s a known thing. These officers violate rights with impunity and little push back in their organizations. They know there’s a different criminal justice system for civilians and police and they exploit it. Even when officers get caught, they know they’ll be investigated by their friends, and put on paid leave. Prosecutors are in the same circles as the law enforcement officers and share the same values and ideas. Most people don’t doubt that there is something seriously wrong with policing in America. Media plays a role in this perception because what makes the news on a daily basis is the bad stuff that officers do and not the good stuff because it is not that interesting. Since the inception of policing, police brutality has existed, but the camera has pushed it to the forefront. Technology is neither good nor bad, it’s what we make it. Video footage provides investigators objective details of incidents. Often, a civilian and a police officer will have different accounts of what happened. A video can tip the balance where we must show that the evidence supports one version over another. But for some reason with all the video that is out there it seems like police officers still get off. Video may not be definitive in every allegation within every complaint, but it can help significantly. Body worn cameras that police wear is meant to provide investigators with another source of evidence, so we can better understand an 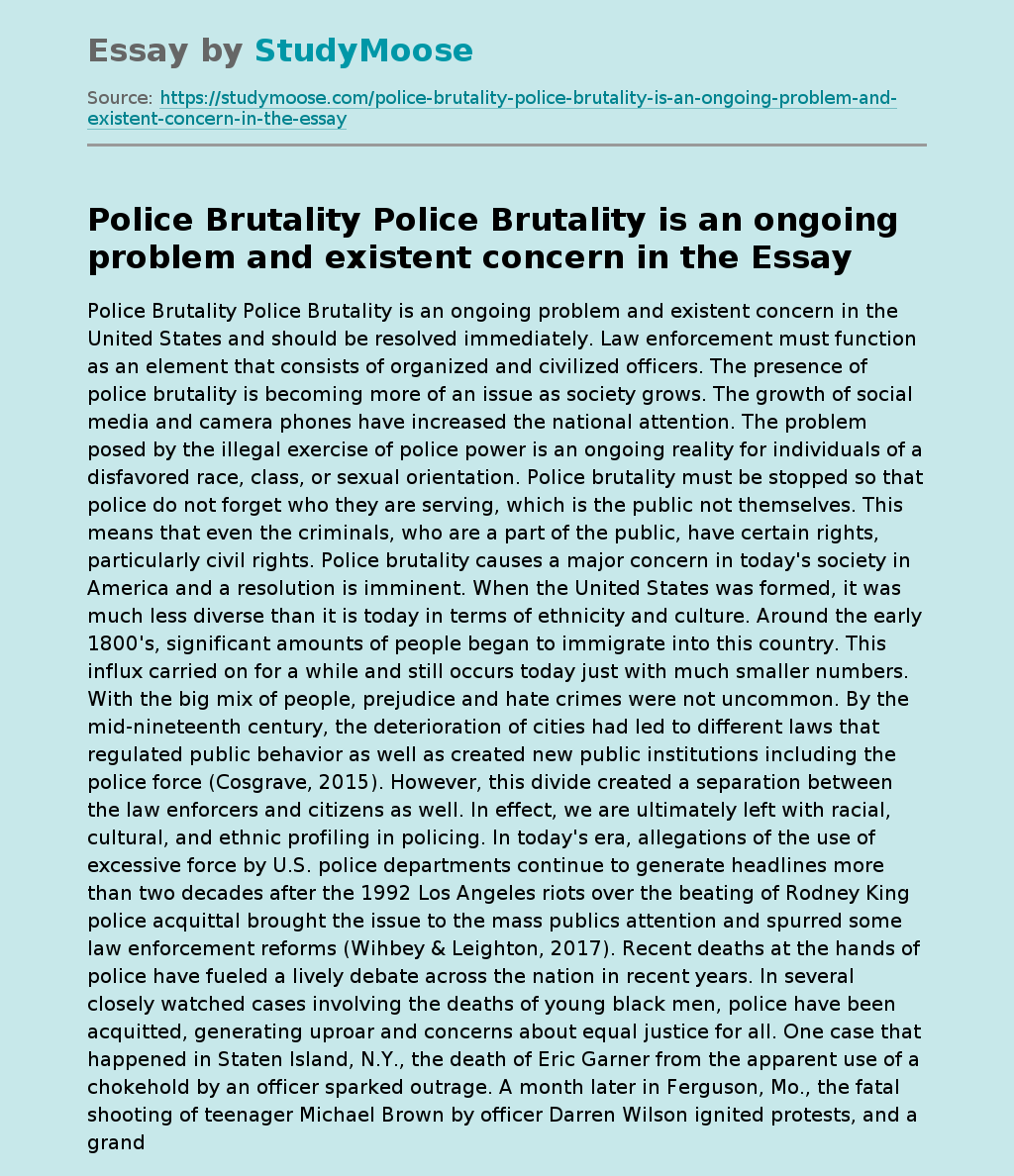