When one thinks of a cop what should come to mind is “hero”. Cops should be a sign of safety, when a cop comes around you should feel safe and protected. Although a few years ago it was that way it is no longer true. Now day’s cops are seen as people you want to stay away from, people are afraid of them. Cops are now abusing, assaulting, and killing innocent people, this is called police brutality. Police brutality can be caused by policeman’s ability to assume everyone is up to no good, racism, and thinking they have the power to do whatever they want, and it results in falsely accused young adults, death, abuse of power by troubling the lives of others.

Don't use plagiarized sources. Get your custom essay on
“ Police Brutality Causes and Effects ”
Get custom paper
NEW! smart matching with writer

All over the world people are getting falsely accused and charged with crimes they did not commit, abused, and even killed because of police brutality. When police cars drive around in certain neighborhoods and see a bunch of teens standing around or just any type of people around in groups they automatically start to assume that they are up to no good.

In the video I am Sean Bell a child said “ There’s been a lot of times where people got shot over nothing. Like one guy he got shot just for pulling out a brush.” This shows that even though the man wasn’t doing anything wrong and didn’t have anything illegal on him the police just assumed that he was up to no good and was going to fire a weapon.

Now days you can’t even pull out a brush without getting shot by police officers. In my eyes they are not protecting us they are taking us down.

Nationally 83 percent of police are white; this is most likely why black males are locked up and get pulled over daily. Racism is something that is still a huge problem in America. White people are always seeing blacks as criminals and anytime there is a crime blacks are the first ones who are blamed. “Tonight there is anger here in New York City as 5 police officers fire 50 rounds into a vehicle last weekend killing one man, injuring two others. Victims were all black and unarmed.” – I am Sean Bell. Why was it necessary to shoot 50 rounds into a vehicle? What did they do that was so wrong for police to fire 50 rounds into their vehicle? The men in the vehicle were not armed so why were two of them injured and one killed. Police see black people and see them all as criminals that lead to situations like this. If cops weren’t racist maybe so many black people would not be locked up or killed.

When a person becomes a police officer they all a sudden thinks they have all the power in the world and can do anything they want and get away with it. Policemen think that they can do anything in the world, they think they have godlike powers and when they do certain things they will get away with it, and the truth is most of the time they do get away with it just by saying “ I thought it was the right call”. Just because they think something is up doesn’t give them the right to start shooting or arrest someone. Everyday people are getting searched without consent, with no warrant, with no reason whatsoever for their actions other than they wanted to. A lot of policemen will pull citizens over for no reason; the biggest reason is to meet their quota. At the end of the month when they don’t have enough tickets to give to their chief they just start pulling people over for going 2 miles over the speed limit, which is unnecessary. “Some of the interactions are entirely situational and unpredictable, driven by each party’s immediate constructions of the others motives or actions.

Voice may be expressed and altercations may occur when officers show disrespect towards a citizen or when officers refuse to provide reasons for their actions.”(Weitzer) Policemen go around and tackle citizens to cuff them when all they had to say was put your hand up. By watching numerous episodes of cops I’ve learned that cops don’t give anyone any time to follow their instructions. If you don’t comply within a second they result to force which is completely unnecessary and may injure innocent citizens. Police use unnecessary force before they even find out what the story is. In my view police really need to tone it down and do their job the way it is supposed to be done and not hurt or kill innocent people.

In conclusion policeman these days do not know how to do their job without injuring, or killing innocent or even guilty citizens. The job of a policeman is to clean up the streets effectively and with the least amount of casualties possible. The police are not doing their job the way it is supposed to be done. They are being extremely violent, and killing innocent people, they don’t give people the chance to do what they want them to do. For the safety of others the police need to change, Cops are now abusing, assaulting, and killing innocent people, this is called police brutality. Police brutality can be caused by policeman’s ability to assume everyone is up to no good, racism, and thinking they have the power to do whatever they want, and it results in falsely accused young adults, death, abuse of power by troubling the lives of others. 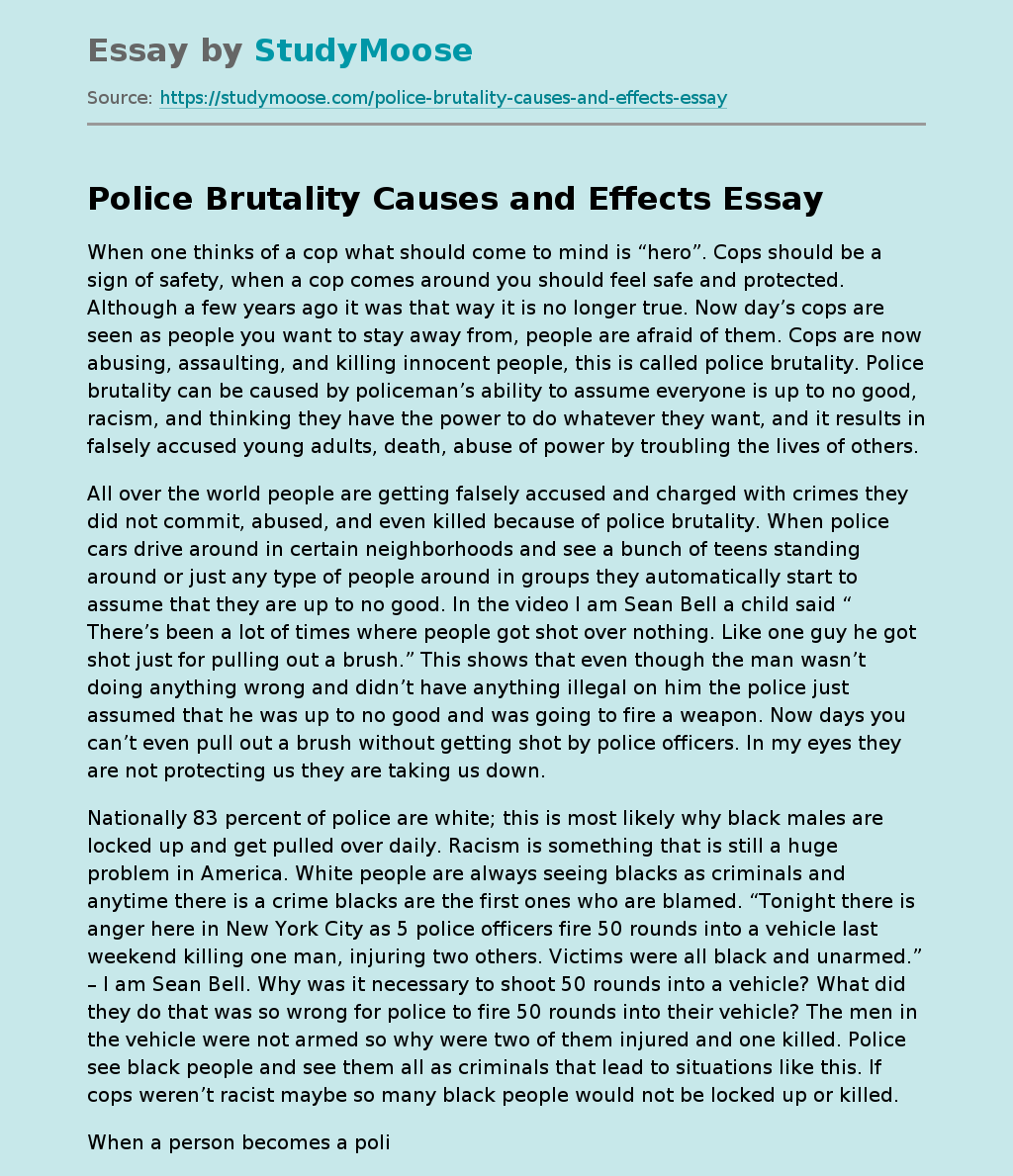